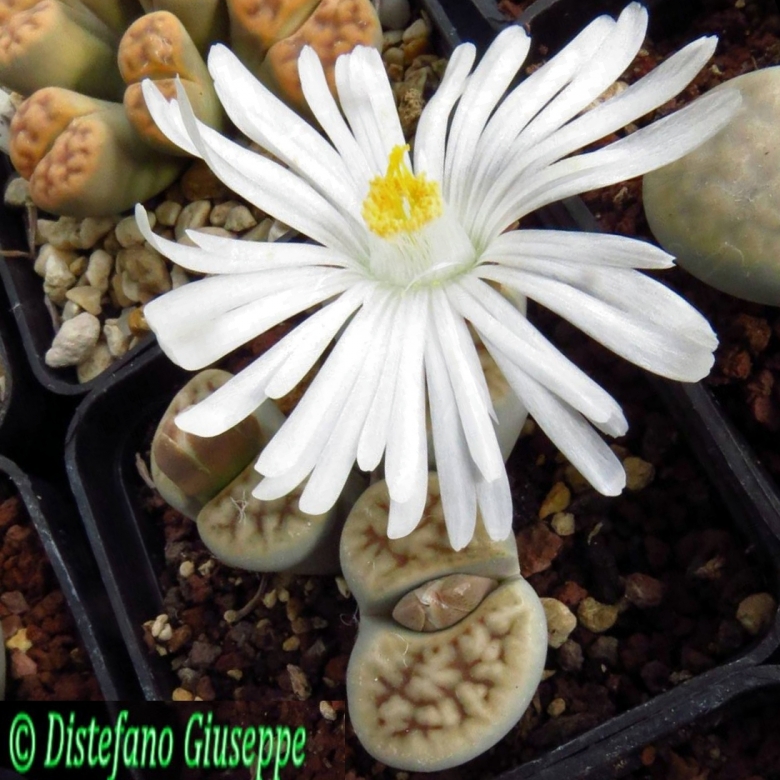 Description: Lithops karasmontana subs. eberlanzii is one of the innumerable local form of the very variable Lithops karasmontana distingushed for the large, irregular, dark green window which is below the level of the edges, and has lobed margins and islands. Flowers white. It has the same variable characteristics of the species. This species resembles Lithops karasmontana subs. bella. The main points of difference are window of subs. bella is transparent and pellucid, whereas that of subs. Eberlanzii is so to say opaque; the ridges of the top surface in subs. bella are raised slightly above the level of the window and are coloured at one stage buff coloured, in subs. Eberlanzii the window and the laciniae seem to merge into a wavy surface and the ridges are coloured greenish white; outer margin of subs. bella has a few laciniae of very irregular shape, some consisting of a large irregular body joined by narrow strip to the margin, and in subs. Eberlanzii outer margin consists of laciniae giving the whole the appearance of being toothed.
Habit: Bodies solitary or in groups of 2 or more, to 4 cm high.
Bodies (paired leaves): More or less subequal, each 2,5-3 cm; top of lobe flat or subconvex; sides and top tinted a violaceous grey; window semi-opaque, surface slightly uneven, the depressions coloured lighter than the ridges, which are coloured a deeper grey; outer margin of numerous (20) more or less uniform teeth; inner margin very nearly straight with here and there a lacinia projecting into the window; laciniae very slightly raised above the surface of the window.
Flowers: Big up to 4,5 cm in diameter (mostly 25-35 mm) satiny white, narrow-rayed.
Blooming season: Late summer or early autumn.
Fruit: Seed capsules mostly 6-chambered, otherwise 4 or 5-chambered. Profile boat-shaped.
Seeds: Minuscule, yellow-brown; smooth to rugose.

Subspecies, varieties, forms and cultivars of plants belonging to the Lithops karasmontana group

Notes: After flowering in the autumn and extending through winter season the plant doesn’t need watering, but they will still be growing, the new bodies will be increasing in size extracting water from the outer succulent leaves, allowing them to shrivel away. In fact the plant in this time extracts water and nutrient stored in the outer succulent leaves, allowing them to dehydrate relocating the water to the rest of the plant and to the new leaves that form during this period until the old leaves are reduced to nothing more than "thin papery shells". 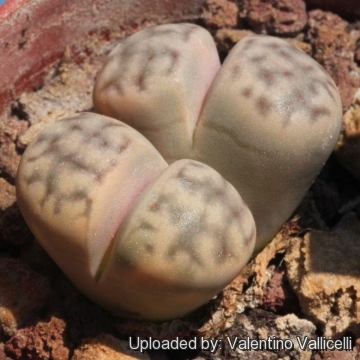 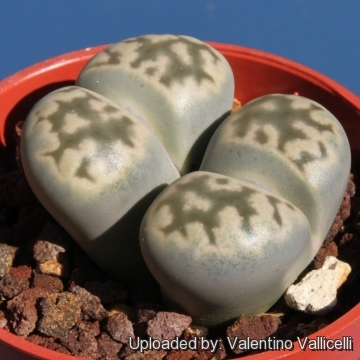 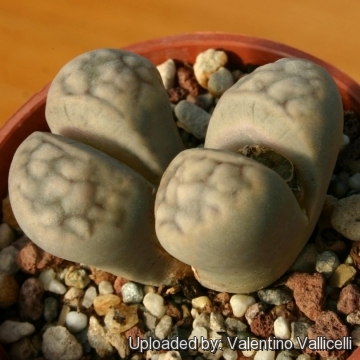 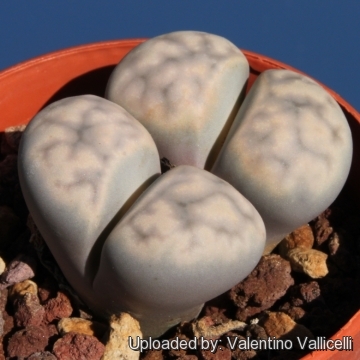 Cultivation and Propagation: Lithops karasmontana subs. eberlanzii needs an open mineral, fast draining mix and the maximum amount of light you are able to give them. The basic cultivation routine is: Stop watering after flowering. Start watering after the old leaves completely dry. (Usually late March or Early April) Water freely during the growing season, soak the compost fully but allow it to dry out between waterings, no water when cold. Some growers fertilize frequently, some hardly ever. Keep them dry during the winter. Nearly all problems occur as a result of overwatering and poor ventilation especially when weather conditions are dull and cool or very humid. This plant is best for a well lit area (Bright shade to full sun).