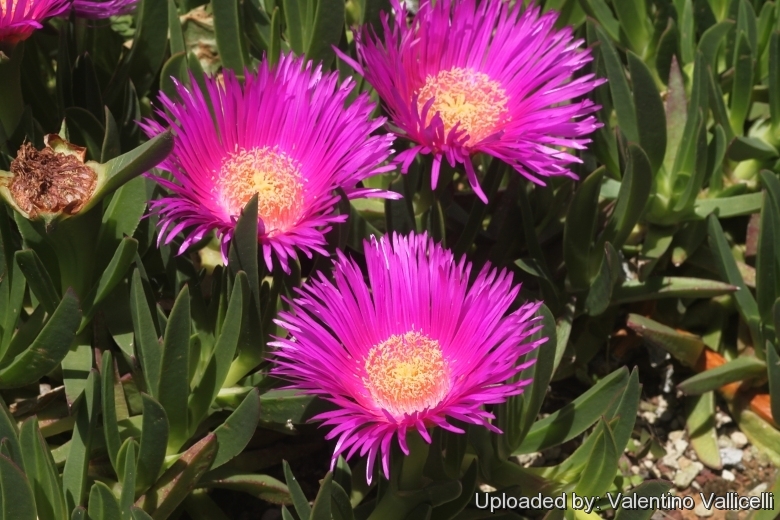 Mesembryanthemum acinaciforme (Carpobrotus acinaciformis) Photo by: Valentino Vallicelli
The large pink flowers are very showy and the plant is frequently cultivated. In many areas it has become naturalised on sea cliffs and shores. The flower is solitary at the end of a short stalk, hermaphrodite (have both male and female organs) and is very large and showy, up 10-15 cm in diameter, with many stamens (400-600) surrounding a starfish-like stigma.

Origin and Habitat: The species is native to South Africa but is naturalised in many other regions throughout the world, notably Australia, California and the Mediterranean, all of which share a similar climate.
Habitat: It is particularly resistant to some harsh coastal climatic conditions and to salt where it may forms large monospecific zones. But due to the fact that it easily spreads by seed and from segmentation (any shoot segment can produce roots) it has escaped from cultivation and has become an invasive species. It is now common along highways, beaches and in other landscapes. ( loose sands, dune, dune scrub, coastal scrub, coastal prairie and rocky outcrops). Now parts of the coastline of many countries in mild climate areas are completely covered by this invasive plant that compete with native species.

Description: It is a robust and fast growing creeping, mat-forming succulent that grow year round, with individual shoot segments growing more than 1 m per year.
Stems: Flat-growing, trailing and curved upwards at the growing point. The stems root at nodes and are up to 2 m long (or more).
Leaves: Succulent, crowded along the stem, opposite, thick 60-130 x 10-17 mm, sabre-shaped, sharply 3-angled and triangular in cross-section, curved upward, yellowish to grass-green, often tinged red along edge. Adaxial and lateral surfaces distinctly concave; keel denticulate, sometimes only in upper portion. Foliage can turn a vibrant red to yellow in colour when older.
Flowers: Solitary at the end of a short stalk, hermaphrodite (have both male and female organs)10-15 cm in diameter, daisy-like with many stamens (400-600) surrounding a starfish-like stigma. The colour vary from brilliant pink-violet to dark magenta (white flowering cultivars are reported too). Calyx oblong or nearly globose; petals rose- or purplish-pink; top of the ovary flat or slightly concave They open in the morning in bright sunlight, close at night, and are pollinated by Bees.
Blooming season: Flowering occurs almost year round (depending on climate and clone) but mainly in spring and summer. (May to July)
Fruit: Fleshy, constricted at the base, indehiscent, 35 mm in diameter, shaped like a spinning top, on a winged stalk The fruit is edible yellow and fragrant when ripe. The outer wall of the fruit becomes yellowish, wrinkled and leathery with age.
Seeds: The seeds are embedded in the sticky, sweet, jelly-like mucilage. Seed production is high, with hundreds of seeds produced in each fruit., and ripen from August to September.

Notes: There are several species of this South African genus of succulents many of them so similar that many may be hybrids. 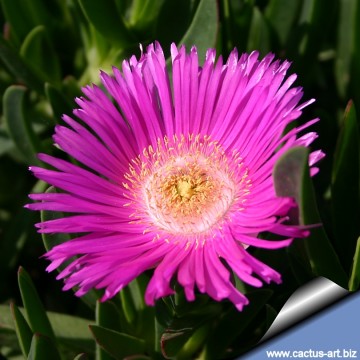 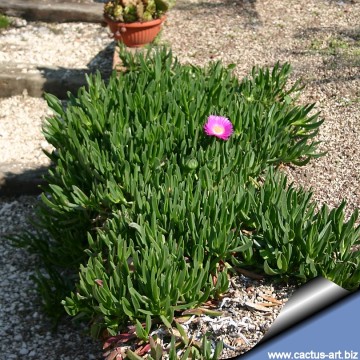 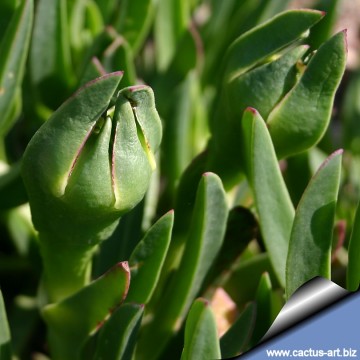 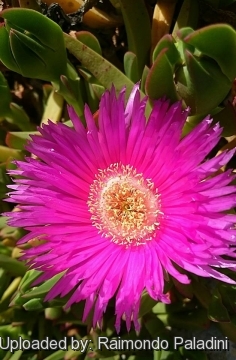 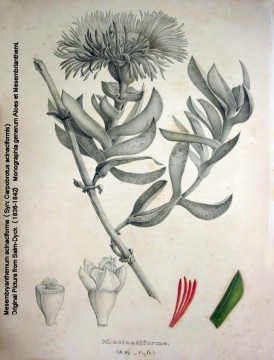 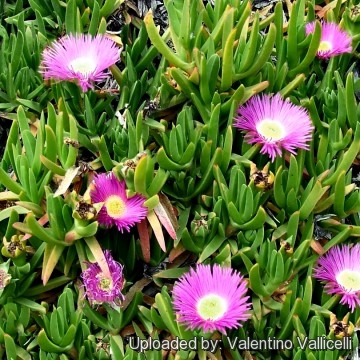 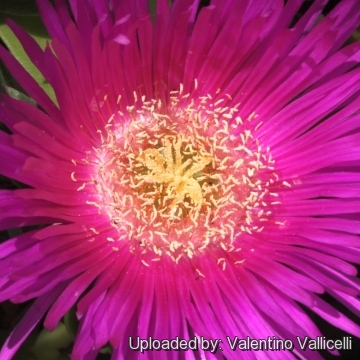 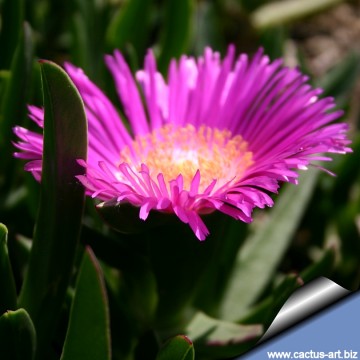 USES:
A) It is an easy-to-grow Carpet-forming succulent groundcover, ideal for low-maintenance and water-wise gardens.
B) It is a drought-resistant trailing plant for stonewalls.
C) Its leaves are edible, as are its fruit, as with other some members of the Aizoaceae family. In South Africa the Sour Fig's ripe fruit are gathered and either eaten fresh or made into a very tart jam. The fruits are tasty and can be eaten fresh.