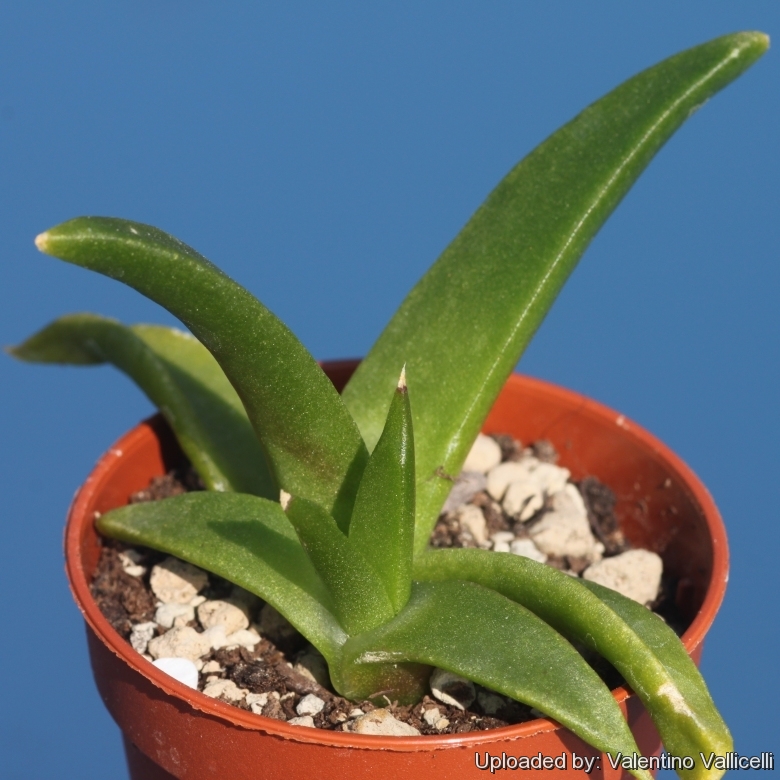 Origin and Habitat: Their habitat lies to the north and south of the Orange River, Cape (South africa)
Habitat: Drier areas.

Description: It is a small, clump-forming perennial succulent with small branching stems that form a mat of fleshy leaves up to 10 cm in diameter (but often more in cultivation). It is dormant in high summer heat, and dormant in the darkness of a cold winter, but otherwise happy to grow whenever it is watered. There are indeed marked differences in sizes of leaf and flowers in plants from different population and also the growing condition (especially sun exposure and water availability) determine conspicuous differences in habit of cultivate specimens.
Stem: Very short.
Rosettes: With pairs of leaves arranged cross-wise (placed at right-angles).
Leaves: Semi-cylindrical, very clearly arranged in 2 to 4 ranks, in equal or moderately unequal pairs, tongue-shaped, tapered to to a sharp point, the longer leaf flat on the upper surface the tip often curved in like a hook and with rounded margins. The leaves are soft, dull waxy green, often pale-blue-toned, light absorbing, succulent and very juicy in texture, reminiscent of gummy bears. Given a very bright position, the leaves are grey-green with red and purple.
Flowers:Long-lived clustered near the centre of the rosette and very showy, large (4-8 cm in diameter), yellow, daisy-like almost stalk-less. Petals golden yellow. They are self-sterile, which means that you need different plants from the same location to obtain seeds.
Blooming season: Flowers bloom in autumn through to late in winter.
Fruits: Persisting in the centre of the plant.

Subspecies, varieties, forms and cultivars of plants belonging to the Glottiphyllum suave group

Notes: The 50 or so species of glottiphyllums are so similar that many may be hybrids. 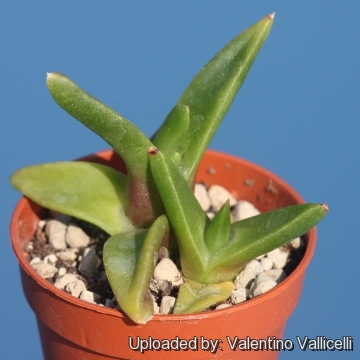 Glottiphyllum herrei Photo by: Valentino Vallicelli
Send a photo of this plant.

Cultivation and Propagation: The plants in this genus represent some of the more easily cultivated succulent species. Their main growth period is in late winter and were heading for spring-summer dormancy, but they do best with at least a little water all year.
Soil: It grows best in sandy-gritty soil and requires good drainage as it it is prone to root rot. It can grows outdoor in sunny, dry, rock crevices (protection against winter wet is required) It can also be cultivated in alpine house, in poor, drained soil.
Fertilization: Feed it once during the growing season with a fertilizer specifically formulated for cactus and succulents (poor in nitrogen), including all micro nutrients and trace elements diluted to ½ the strength recommended on the label.
Watering: Requires little water otherwise their epidermis breaks (resulting in unsightly scars). Water moderately from the middle of summer to the end of winter, and keep the compost almost dry when the plants are dormant (only occasional misting). Water minimally in spring and summer, only when the plant starts shrivelling (, but they will generally grow even in summer if given water). If grown in a container, bottom watering by immersing the container is recommended. It must have very dry atmosphere.
Exposition: Keep cool and shaded in summer, but provide maximum light the rest of the year. Remember that a sunny locality is best, otherwise they will not flower properly.
Hardiness: It prefer a very bright situation and require a minimum temperature 5°C (But will take a light frost and is hardy down to -7° C for short periods if it is in dry soil). USDA zones 9A – 11. In areas prone to frost, grow in an intermediate greenhouse or conservatory, in pots.
Pests and diseases: Soft leaves mean easy to damage. May be susceptible to mealybugs and rarely scale.
Uses: Container, rock garden.
Remarks: However there are two ways to grow glottiphyllums: The first is to let nature take her course, which means giving them large pots and copious water; they will burgeon into enormous masses of glistening green leaves. The other is to starve them into svelteness by hot summer droughts, small pots, and firm loam. The results can be very attractive. In any case it is best to treat them as late winter growers.
Notes: The 50 or so species of this South African genus of succulents are so similar that many may be hybrids.
Propagation: Seeds or cuttings. Seeds germinate very easily and can be sown in early to mid-spring, but can be sown at most times of the year (Avoid very hot weather in summer) and germinated in heated humid environment. Do not sow the seeds too deep. If sown too deep, they will be smothered and probably not germinate. Under ideal conditions, seedlings will grow rapidly. Plant the seedlings out when they are 3–5 cm in height.
Alternatively, use stem cuttings taken towards the end of summer in an heated propagating case (15-21°C) Cuttings root easily and remain true to the species, while seeds tend to hybridize.