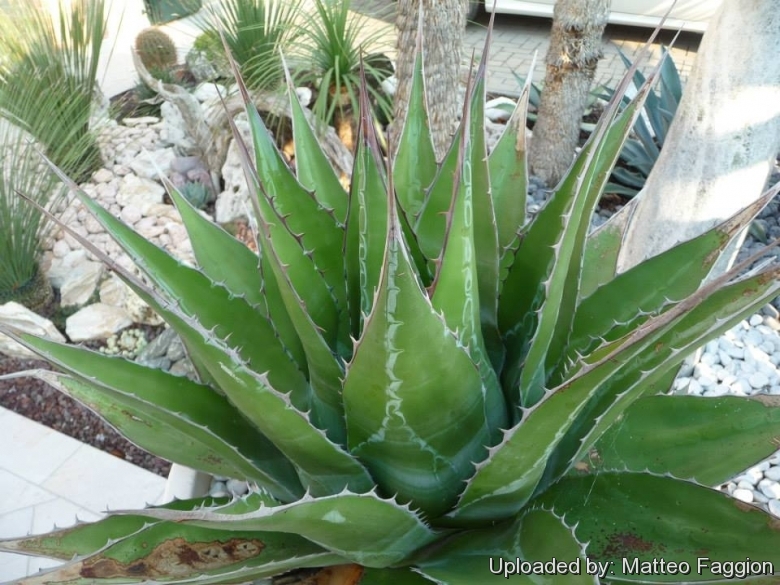 Agave montana Photo by: Matteo Faggion
Particularly showy are the attractive saw-tooth pattern bud imprints on the flat surfaces of the next emerging leaf. The teeth are well imprinted on leaves so as to resemble frosted.

Origin and Habitat: Agave montana grows in the northeastern states of Tamaulipas, Nuevo León and Querétaro in Mexico.
Altitude range: This species is found at elevations of 2600-3000 metres.
Habitat and ecology. It is a high altitude plant often sandwiched between the larger, higher elevation Agave gentryi and the lower elevation Agave scabra and can show characteristics of both. It grows as an understory plant amongst mixed open forest predominantly of Quercus miquihuanensis, Pinus hartwegii and junipers together with Arbutus xalapensis, Buddleja cordata and the tall, trunk-forming Nolina hibernica. Plants naturally grow in areas with large rocks and boulders mixed with soil rich in organic matter and covered with a thick layer of pine needles. The weather in its native habitat can be very cold (way below freezing at times) and wet. At these elevations, there is often cool moist cloud and temperatures are cool-to-warm in the summer - with summer being the wettest season. In the winter, frost and snow are not uncommon. It is one of the coldest climates in Mexico and has a comparatively high rainfall.

Description: Agave montana, the Mountain Agave, is a particularly handsome Agave that stay solitary (doesn't offset). It forms a very symmetrical artichoke-like rosette of dark green leaves usually covered with a pale frosting of whitish bloom and carrying on their lower surfaces the distinct impressions of the thorny leaf margins of the previous outer leaf-bud. These thorns and the strong terminal thorn are a contrasting reddish brown. Like many in its family plant dies after blooming but does not sucker or form offsets so when it gets killed its gone, however the seeds do germinate very easily. As with most agaves, individual clones vary considerably.
Derivation of specific name: This member of the Cactaceae family was given this name by Botanist Jose Angel Villarreal who used the Spanish word for mountain, not a reference to the state of Montana.
Rosettes: Dense, hemispherical, 75-120(-130) cm tall by 120-150(-170) cm across with about a hundred, uniform, neatly stacked leaves spiraling in twelve to sixteen layers around the centre of the plant, giving the plant the look of a gigantic artichoke.
Leaves: Short, upright, flattish on both surfaces, broadly dagger-shaped broad from the base to above the middle before tappering quickly to the tip(30-40 cm long, 15-17 cm wide) apple green to dark green, with margins, terminal spine and large teeth that are all cinnamon reddish brown. The large, hooked teeth turning grayish as the leaves age. The terminal spine is stout, reddish brown, 2.5-5 cm long, and very stiff. Also showy are the attractive saw-tooth pattern bud imprints on the flat surfaces of the next emerging leaf. As all of the energy is used up by the flowering the leaves turning spectacular shades of purple, red, orange and yellow.
Inflorescence: When the plant reaches flowering age, gigantic asparagus shoot begins to emerge straight up from the heart. The phallic shaft is about 15-25 cm thick and obscured by the imbricately layered bracts. When mature, the branched inflorescence is 3.6-4.3 meters tall, with twenty to thirty very short side branches densely clustered in the top one third.
Flowers: Brilliant yellow, 6-7 cm long, tightly packed at the ends of the side branches.
Phenology: Plants start to shoot their thick, pole-like scape in the summer and autumn, reaching their full height before winter, but waiting until the weather warms in the spring to poke their short, stubby side branches out of the knob of densely congested bracts. Once fully open, the compact, Christmas-tree-shaped cluster of side branches holds numerous, long, yellow flowers.
Note: Agave 'Baccarat' another plant originally grown as a form of Agave montana, is now thought to be a hybrid between this species and the closely related Agave gentryi.

Cultivation and Propagation: Agave montana is a stupendously beautiful plant native to northeastern Mexico at altitudes up to 3000 metres so it is quite cold hardy. Plant in full sun to light shade. Regular irrigation required. Hardy in much of the British Isles and better able to cope with the wet than most Agaves.
Growth rate: This is a slow to moderate growing medium sized agave, but can grow pretty fast compared to most agave because it does not need as much sun as most agave and it keeps growing in temperatures where other agaves stop growing altogether.
Soil: In habitat this species grows in soil rich in organic matter and covered with a thick layer of pine needles. Good drainage in a gravel-mix substrate suits well. In areas with alkaline, desert soil low in organic matter, it is wise to amend the soil almost as if you are planting a vegetable garden. The plants will also benefit from a cover of seasonal perennials and low-growing, summer-active grasses to help keep the soil cool.
Light requirements: It is a high altitude plant and is found as an understory plant (full sun is not it's natural setting).
Water requirements: This agave will keep growing in cool conditions even when it doesn't get full direct sun, matter in fact it does need rain in spring and regular watering in summer compared to other agave. Coming from very high altitudes, this is one prefers some supplemental water in the summer.
Hardiness: It has survived down to -12° C, and could perhaps take lower temperatures. (Zone 7). Although Agave montana is more capable of tolerating winter wet than most Agaves, nontheless, long extended periods of sub-zero temperatures or freezing fog are more challenging than anything it experiences in Mexico that will mean additional protection with fleece. The problem arise is when after a cold snap if the temperature stay really low and it freezes for several days in a row A. montana will have some trouble surviving.
Exposure. Plants seem to prefer some shade in the hot part of summer, but should do fine in full sun in the cooler zones.
Heat tolerance: They doesn't suffer from hot and wet summer (40° C )
Propagation: It can only be grown from seeds because it does not produce daughter plants, i.e. clumps of plants, however the seeds do germinate very easily.