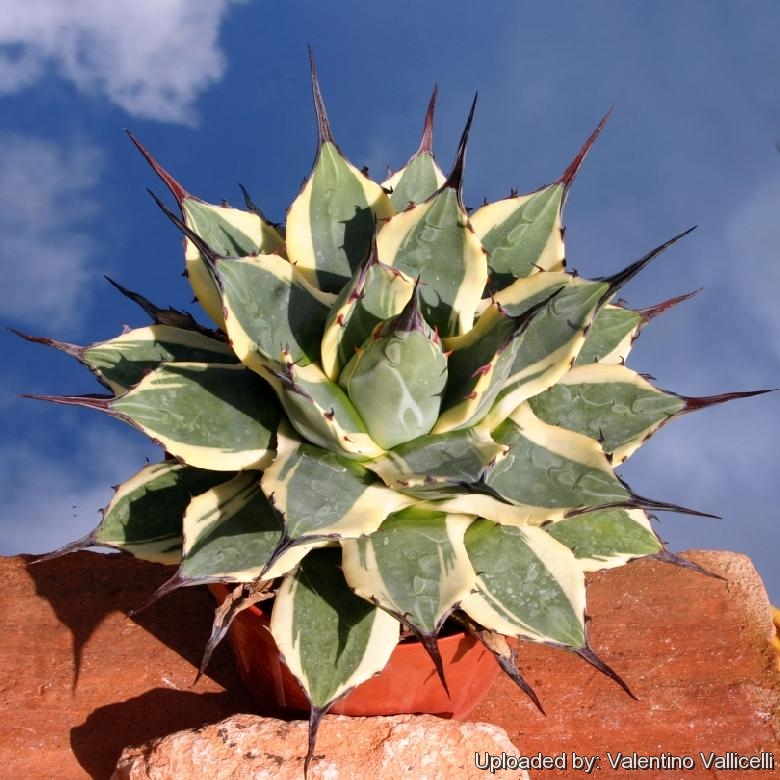 Agave applanata cv. Cream Spike (Agave patonii ''variegata'' or Agave parry cv. Merico Nishiki)
This variegated form is especially attractive and it is always one those plants that caught peoples eyes in the green house. It look like a giant artichoke with somewhat wide, short pale blue leaves margined with cream coloured edges and a dark-red, sharp terminal spine and small, but very sharp reddish lateral leaf spines. The handsome smaller rosette will not exceed 15 cm in diameter and is therefore ideal for growing in containers.

Origin and Habitat: Garden origin (Nursery selected cultivar). Randy Baldwin at San Marcos Growers in Santa Barbara, Califor-nia, has indicated that Rick Nowakowski at Nature's Curiosity Shop received this plant from Japan in the 1980s, but the original source of the form is still a mystery.

Description: Agave applanata cv. Cream Spike, long misrepresented in horticulture as as Agave patonii ''variegata'' is the dwarf, small growing, variegated form of Agave applanata. It is highly ornamental and quite popular as a container plant, but there are many that don't believe this plant to be a cultivar of Agave applanata and still continue to consider it a cultivar of Agave parryi. It is highly dimorphic, with a low-growing, almost flat juvenile form, before making a rounded rosette with very stiff more erect leaves as it ages. This cultivar is also found under a few different names like:Agave patonii f. marginata alba or 'alba marginata', Agave patoni f. variegata , or with the Japanese names Agave parry cv. Merico Nishiki , or 'Ohikitsusyote Nisiki' or 'Toyoushi'. Other names include: Agave minima 'Variegata'. This cultivar is indeed quite variable, this may suggests that there is more than one clone in culture, however growing condition (exposition, water, soil, pot size, feeding etc.) and age of the plant, greatly influences the habit, colour and sizes of its leaves and spines. It shoots off pups/offsets readily as the mother plant matures.
Stem: Acaulescent.
Juvenile form:Rosettes, larger than tall when young, usually only 10-12 cm tall by about 15-25 (or more) cm wide.
Adult form Rosettes, compact, looking like giant artichokes, eventual size of the rosette is unknown, with the largest ones having reached 30-40 cm tall and about 60 cm in diameter.
Leaves: Essentially smooth light blue-grey-green to olive green, very broadly oblong, quickly acuminate, openly concave (spoon-shaped), margined with cream coloured edges and with a stiffly erect-spreading; spine somewhat flexuous (becoming firm in mature specimen) , from purple-chestnut becoming dull grey-brown. The margins occasionally have a seasonal slight flush of red at the leaf tip and base. Marginal spines are well spaced.
Flowers: Blooms only when the plant is 20 years old or more. The flower stalk is up to 3 (or more) meters tall with small orange to yellow flowers. The plant then dies leaving suckers that grow into replacement plants. 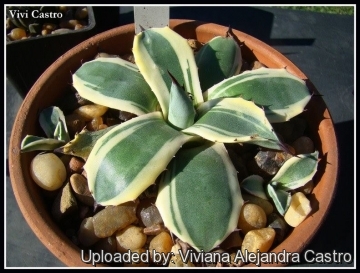 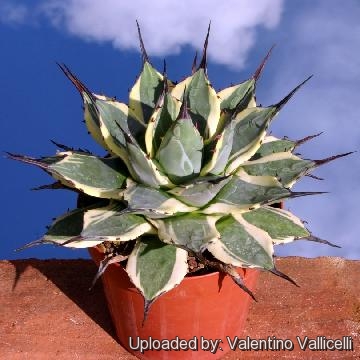 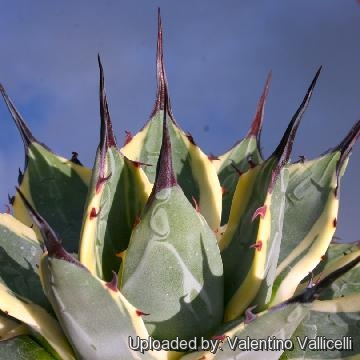 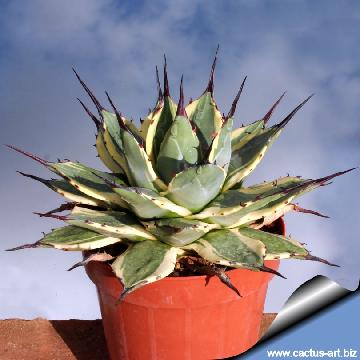 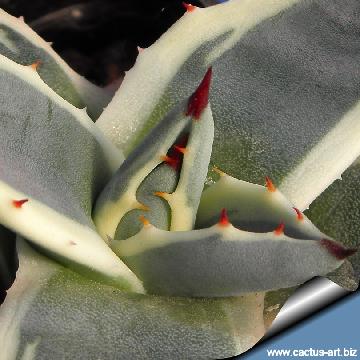 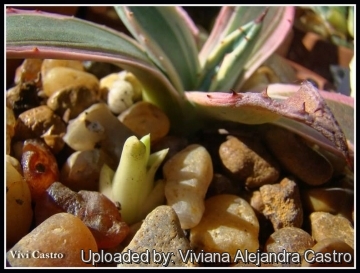 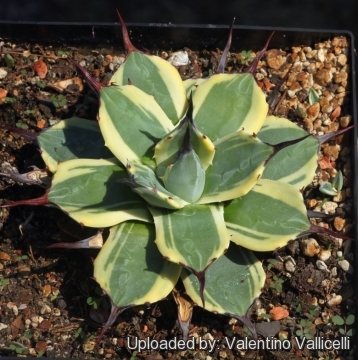 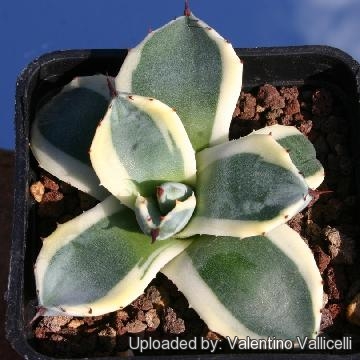 Cultivation and Propagation: Agave applanata cv. Cream Spike is a stunning specimen plant for containers the distinguishing feature of which lies in the variegated leaves. It tend to be slow grower, but worth the effort.
Growth rate: The growth rate is quite slow, especially when grown as a miniature in a container, and it will take many years to achieve full size.
Soil: Grow it in porous soil with adequate drainage.
Exposure: It do well in full sun or a lightly shaded area, but prefers some shade in hot climates.
Moisture: Water thoroughly when soil is dry to the touch. In winter watering this plant can be done once every 1-2 months, there is no need to mist the leaves.Warning too much water can cause leaves to rot.
Pests and diseases: No serious insect or disease problems.Watch out for rodents! This is one that they seem to relish, and they can ravage a young plant overnight. Stem or root rots can be a problem in wet soils.
Hardiness: Plants have proven hardy to at least -7 to -8 C and should probably be able to withstand slightly lower temperatures. USDA zones 8b-11.
Propagation: Relatively easy to propagate by suckers. Young plants produce copious quantities of pups which are easily pulled and re-planted elsewhere. Remove the basal suckers in spring or summer and let the cuttings dry for a few days before inserting in compost. The only problem is the logistics of getting to the suckers, very sharp spines and suckers usually right up against, or underneath the mother plant.