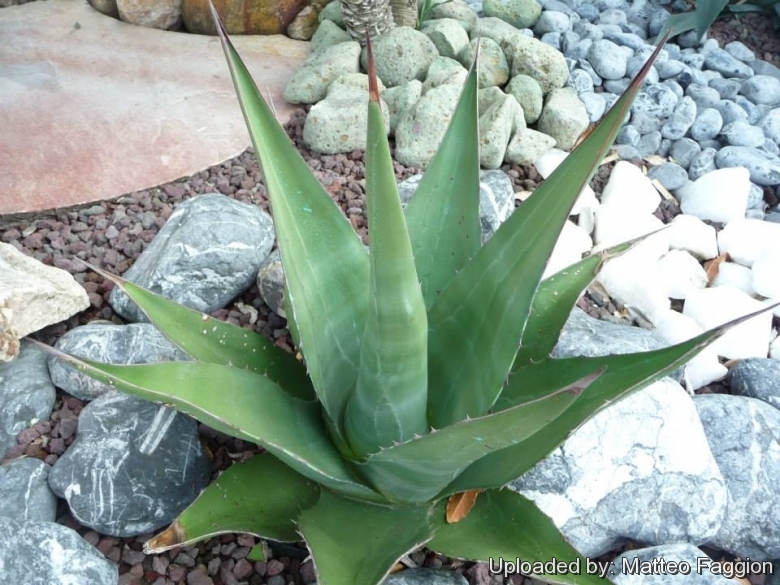 Origin and Habitat: Agave havardiana is a plant species native to the Big Bend area of western Texas as well as Chihuahua and Coahuila in north western Mexico.
Altitude range: This species is recorded from 1200 up to 2000 metres above sea level.
Habitat and ecology: It prefers grassy to rocky calcareous slopes often in association with Dasylirion leiophyllum and Nasella tenuissima, it is also found in desert scrub, pinyon-juniper, and oak woodlands. Agave havardiana hybridizes with Agave lechuguilla to form Agave x glomeruliflora, with which it may also hybridize.

Description: Agave havardiana (Havard's Century Plant) is an acaulescent midsized species forming rosettes low to the ground, sometimes creating suckers but not forming large colonies like some other species. The short, silver-grey to nearly white triangular leaves of Agave havardiana are up to 60 cm long, about three to four times longer than broad, with teeth along the margins and at the tip. When the plant matures and blooms the tall candelabra inflorescence rises to over 7 metres bearing yellow to yellow-green flowers that attract birds and bees. Its leaves are broader and more chalky in colour to Agave parryi which it superficially resembles and it is an altogther larger and more imposing plant. It is also faster growing than Agave parryi - and unlike Agave parryi - it usually forms a solitary rosette although on occasion it does produce offsets.
Derivation of specific name: It was originally described under this name by William Trelease in 1912, who named the plant to honor Valery Havard, who had previously identified it as Agave wizlizeni in the Guadalupe Mountains in 1881 and in the Chisos Mountains in 1883. Havard was a French-born imigrant to the US and was an army officer, physician , author, and botanist. While serving as an army doctor in Texas he was able to explore new territories and discover new plants.
Rosettes: Usually solitary, medium to large, rather open, (40–)50–80 cm tall, (50–)100–150 cm in diameter, rather open.
Leaves: Ascending, 30-60(-75) cm long, 15–27 cm wide, thick, rigid, glaucous-grey to grey-green, occasionally yellowish, not cross-zoned, lanceolate to ovate-acuminate, rigid, broadest at clasping base, slightly narrowed above base. Margins straight, armed, teeth single, well defined, (5–)7–10 mm long, 1.5–2 cm apart. Apical spine dark brown to grey, subulate, 3–5(–10) cm long.
Inflorescence: Flowering stalks (scapes), not bulbiferous, 2 to 7 m tall. Inflorescences (panicle) 2-4 m tall, broad, open with 12–20 lateral branches. Bracts persistent, lanceolate, to 0 cm long;, slightly ascending, comprising distal 1/2–2/3 of inflorescence, longer than 10 cm.
Flowers: 21–48 per cluster, erect, 6.8–9 cm; perianth yellow to yellow-green, tube funnelform, 14–22 × 15–22 mm, limb lobes erect, slightly unequal, 18–24 mm; stamens long-exserted; filaments inserted irregularly ca. mid perianth tube, erect, yellow, 5–6.5 cm; anthers yellow, 25–30 mm; ovary 3–4 cm, neck constricted, 2–8 mm.
Blooming seson: Summer-early autumn.
Fruits (capsules): Dry, short-pedicellate, oblong to obovoid, 4-6 cm long, apex beaked.
Seeds: 6–7 mm x 4-5 mm, smoothly black. 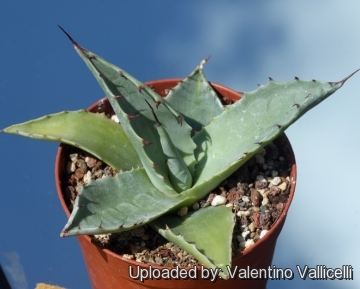 Agave havardiana Photo by: Valentino Vallicelli
Send a photo of this plant.

Cultivation and Propagation: Agave havardiana is a wonderful cold-hardy Agave that with care and the correct cultivation will survive in UK gardens through the cold wet rigours of a British winter. It suckers, but tends to be slow to sucker, so easy to keep control of. Because of its compact size, plus its low water use and low maintenance, it is considered a good landscaping plant for desert residential landscaping.
Growth rate: Slow to medium growing, but speeds up considerably given the best conditions.
Exposure: They do well in full sun or a lightly shaded area with afternoon shade.
Soil: They do best in very well-drained, sandy or gravely soil. As an ornamental it is also grown in containers where it stays smaller than its outdoor brethren. In pots they need a very porous mix soil (e.g. 2 parts peat moss to 1 part loam to 1 part of pumice).
Repotting: Use pot with good drainage.
Fertilization: They grows quickly if kept well nourished with a slow release fertilizer specifically formulated for cactus and succulents applied once or twice a year (poor in nitrogen), including all micro nutrients and trace elements.
Hardiness: Agave havardiana is hardy to -7 to -12° C depending by clones.
Scenography: These striking plants are wonderful when used for accent or simply to provide some all year round foliage and often used in a pot as a patio plant, can be moved around to change the scenery or position to give more shelter.
Traditional uses: This plant was called Mescal in association with the Mescalero tribe of the Native American Apache who roasted and ate the plant.
Pest and diseases: Very hardy but susceptible to fungal attack The key - as with all the cold-hardy succulents - is to ensure they have perfect drainage with little soil so that rainwater quickly passes past their roots and doesn't stand.
Warning: The spines along the sides of the leaves are retrorsely barbed, each barb arching backward; should one become embedded in the flesh of your finger, it would not come out easily.It
Propagation: Seeds or suckers which often are found growing around the base of the plant, Remove the basal suckers (if available) in spring or summer and let the cuttings dry for a few days before inserting in compost.