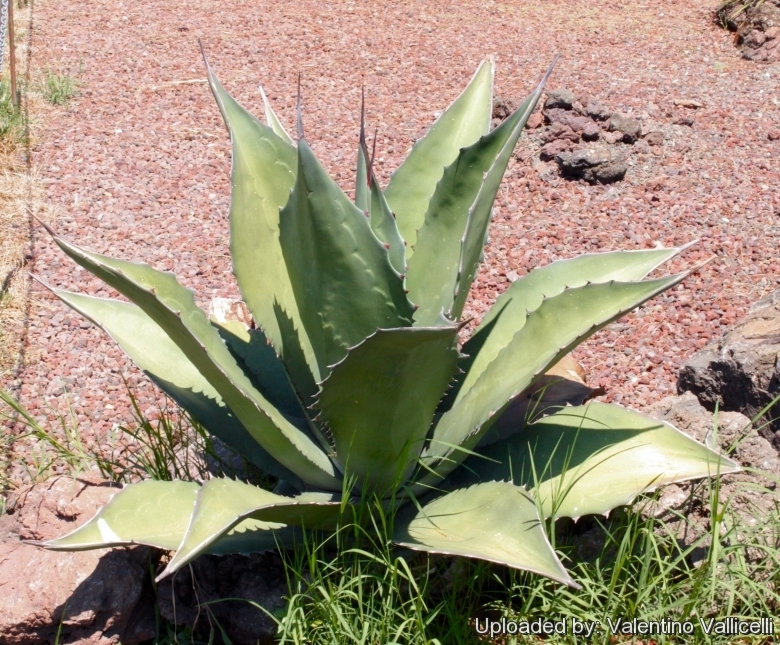 Origin and Habitat: Central and southern Mexico. It is also widely cultivated and naturalized in tropical countries.

Description: Agave salmiana var. ferox is a huge scary agave often encountered in cultivation. Over time it will produce a an urn-shaped silhouette made up of very broad , and well-armed, leaves (up to 35 cm wide). The epithet ferox is due to the hard and long (up to 8 cm) apical spines. This Agave is truly one of the most amazing species one can grow, ultimately reaching dimensions of 3,5 metres wide or more. When the plant matures produces a very tall (up to 9 metres) candelabra-like spike, with bright yellow blooms that attract birds and bees. Like many in its family plant dies after blooming and offsets take over.
Similar species: There is a ample variability in shape and colour of leaves this may owe to differences in provenance or to the possibility that many plants considered to be this species are actually a form of Agave americana subs. Protamericana, which is much hardier. Agave salmiana var. ferox intergrades with var. salmiana.
Habit: Perennial, very large evergreen rosetting succulent forming ample suckers which can lead to a large colony if suckers are not removed. It is monocarpic.
Stem: Short and thick.
Rosette: Large, loosely leaved,
Leaves: 1-2 m long, 20-35 cm or more wide, broadly lanceolate to oblanceolate, narrowed towards the base, tapered above, acuminate, firm and smooth, rigid, grey-green to glaucous grayish, deeply convex below at base, concave to guttered upward, the apex sigmoidally curved. Margins sinuous. Marginal spines brown to grayish brown, 1-2 cm (including the fleshy mammillate cushions on which they stand), confluent at the base of the leaf, the median spines 2-3 cm distant. the upper 7-8 cm distant. Terminal spine 5-10 cm, black-brown grooved above for over half its length. long-decurrent sometimes to mid-blade as a heavy corneous margin.
Inflorescence: Stout, paniculate. Peduncle closely imbricate with large fleshy bracts, (6-)7-8(-9) m tall. Panicle broad, with 15-20 large loose umbels in upper half of shaft.
Flowers: Coarsely fleshy 8-11 cm long, frequently flushed reddish in the bud but opening yellow or greenish yellow. Ovary green50-60 mm long, thick, cylindric. Tube large funnelform, 21-24 mm deep, 20 mm broad, thick-walled. Tepals dimorphic, narrow, involute, the inner 2-3 mm shorter with high fleshy keel bordered by thin, hyaline, inrolling margins, the outer 21-25 x 6 mm and bulging at base. Filaments 55-70 mm long, inserted above mid-tube. Anthers 30-35 mm long, yellow. Pistil over-reaching stamens.
Blooming season: Spring (in habitat late March to June appears to be the principal flowering season.) Under right condition it would bloom in 10 years.
Fruits (capsules): 5.5-7 x 2-2.2 cm, stipitate, beaked, woody, brown.
Seeds: 8-9 x 6-7 mm, black, tear-shaped.

Subspecies, varieties, forms and cultivars of plants belonging to the Agave salmiana group 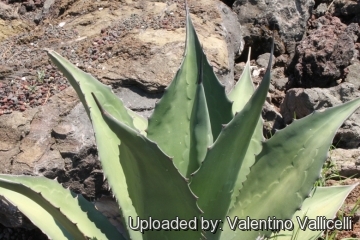 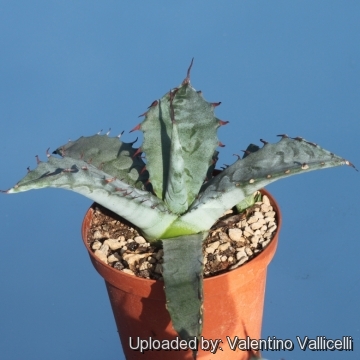 Cultivation and Propagation: Agave salmiana are usually cultivated outdoors in rock gardens, in cactus and succulent gardens, in Mediterranean-style landscapes, in borders, or as a specimen. Need full sun and a very well-drained, slightly acidic, sandy or gravely soil. As an ornamental it is also grown in containers where it stays much smaller than its outdoor brethren. Specimens even survive in pots or in the ground in the wet winters of the south coast of England. At the other extreme it may be seen planted out in southern Arizona and Texas.
Growth rate: The Agave salmiana grows fairly fast in summer if provided with copious water but allows to dry thoroughly before watering again. During the winter months, one should only water enough to keep the leaves from shrivelling.
Soil: It needs a very well-drained, soil.
Repotting: Repot every two years. Use pot with good drainage.
Exposure: It does well in full sun or a lightly shaded area.
Warning: It can get very large, and it is armed with needle-sharp spines. The sap is quite acidic and can be quite painful if it comes in contact with the skin. It can form small blisters.
Hardiness: Agave salmiana is theoretically hardy to -9° C, particularly when dry and it is best to avoid severe freezing temperatures. Keep it in a cool, frost-free area in winter and put it out on the balcony or patio in summer.
Heat Tolerance: Excellent.
Uses: These striking plants are wonderful when used for accent or simply to provide some all year round foliage and often used in a pot as a patio plant, can be moved around to change the scenery or position to give more shelter
Alcoholic drinks: Agave salmiana is considered to be the great wine making agave "maguey de pulque" and has long been cultivated in south central Mexico for this purpose.
Warning: Use extreme care when working around or trimming any Agave. Not only are the spines wicked and cause a painful swelling if one is poked, but the sap of many species is caustic.
Propagation: Relatively easy to propagate by seeds or by suckers. Sow at any time of year in a well-aerated compost at a temperatures of 22-24°C . Stand the pots in water, moisten thoroughly and drain. Scatter and press lightly the seed onto the top of the compost. But do not cover the small seeds with compost. Secure a polythene bag around the pot or cover the container with glass or and place in a warm shaded place. If possible, germinate in a propagator. Some seedlings may appear within a week or 10 days others will take longer. At lower temperatures, germination usually takes considerably longer. Once germination has taken place, remove gradually the glass or plastic and move into a good light but not in direct sun. If the young plants are exposed to too much sun, or the compost dries out, they may stop growing and often turn red; once they stop, it is often difficult to persuade them to start growing again. Never let the pots dry out-but don't saturate them either. A sodden compost is as harmful as a dry one.
Remove the basal suckers in spring or summer and let the cuttings dry for a few days before inserting in compost.