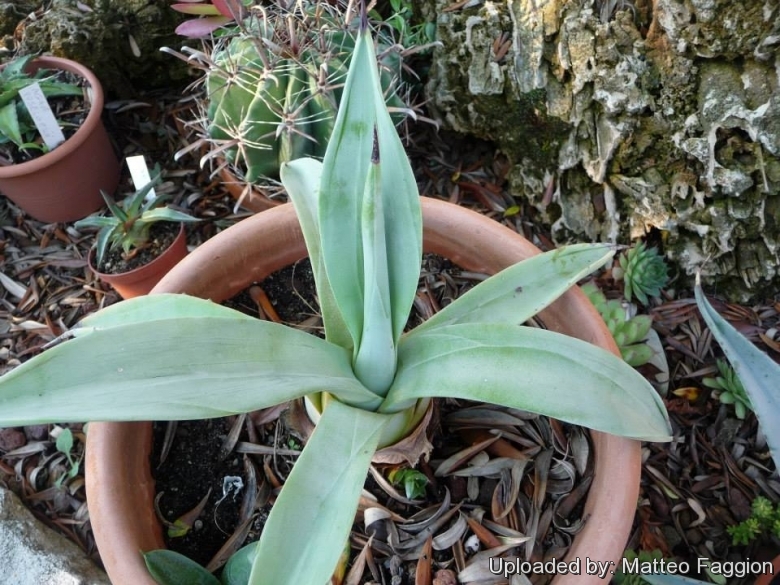 Origin and Habitat: Mexico; Coahuila, Nuevo Leon, Durango and San Louis Potosi, but most of the plants in cultivation appear to be horticultural clones.

Description: It is a solitary or branching medium sized agave with thick pointed, almost spineless leaves, up to1,8 m tall and 3 m wide. It has a moderate growth rate, produces offset plantlets at base.
Stems/Trunks: Stemless, but removal of lower leaves creates a short trunk.
Rosette: In the full sun the plant has an open, graceful, fountain-like rosette about 150-180 cm tall with equal spread, but slightly smaller more upright and narrow than Agave americana.
Leaves: Fleshy, fraglie, large, lanceolate-oblong, nearly straight or gracefully arching and recumbent, grey-green, light bluish gray or deep blue-green sometimes almost luminous and nearly white, to 120(-200) cm long and about 10 cm wide above the base and 20-25 cm towards the centre, almost spooned out, gradually tapering, upper surface concave or almost flat without sawtooth edges, mildly toothed (with fine tooth) if at
Flowers: large stalk to 4,5-6 m high bearing cluster of yellow flowers.
Blooming season: Spring to summer. Remember that the plant will flower once, then it dies.
Fruit: Flat disk seed enclosed in capsule

Subspecies, varieties, forms and cultivars of plants belonging to the Agave weberi group

Cultivation and Propagation: It tend to be slow grower, taking several years to achieve a mature size, but worth the effort. Grow it in porous soil with adequate drainage. It should be grown in full sun, but sensitive to light during the hottest part of summer, closing up when it is too bright or too hot . The leaves will keep their blue-gray color and the plants will stay more compact. Water thoroughly when soil is dry to the touch, with supplemental water during hottest part of year. In winter watering this plant can be done once every 1-2 months, there is no need to mist the leaves. It is a cold hardy species.
Heat and drought tolerance: Excellent.
Maintenance: Low, remove spent leaves.
Propagation: Relatively easy to propagate by seeds or by suckers. Remove the basal suckers in spring or summer and let the cuttings dry for a few days before inserting in compost. only problem is the logistics of getting to the suckers - very sharp spines and suckers usually right up against, or underneath the mother plant.
Traditional uses: Some people think this is the agave grown for tequila. Technically, tequila is a type of mezcal, however all mezcals are not tequila. To be a true tequila, it must be derived from Agave tequilana (a.k.a. 'blue agave' or 'agave Azul'). The tequila also must be produced in the Mexican state of Jalisco, in the town of Tequila. Mezcal is made from one of 5 or 6 species of agave. Agave weberi, is one used for mescal, not tequila. Mezcal and pulque, are produced by different methods and are regarded as more traditional because the distilling process used for tequila was developed in Mexico only after European colonisation. Tequila is to mescal much as Chardonnay is to wine.
Gardening: Agave weberi make great potted plants as well as excellent landscape plants. They are wonderful when used for accent or simply to provide some all year round foliage colour and often used in a pot as a patio plant, they make an eye-catching statement and along with other evergreen plants in pots, can be moved around to change the scenery or position to give more shelter. It is a valuable accent plant with tropical appearance.
Defense:It is used as an edge plant and as an animal barrier.
Drink: It is used to make liqueurs, the Mexican drink tequila, mescal and pulque.