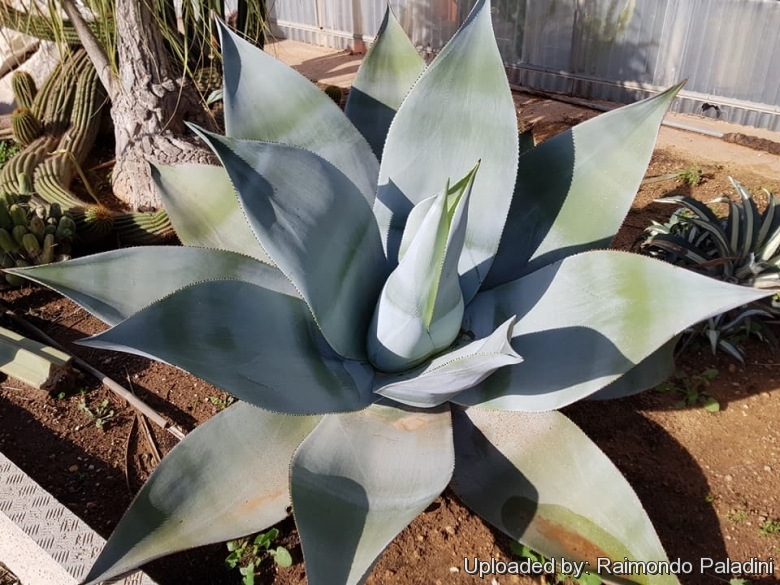 Origin and Habitat: It is native to Cerro Guiengola, a limestone mountain in the southern Mexican state of Oaxaca.
Altitude range: It grows at an elevation of about 100–1,000 metres above sea level.
Habitat: It grows on sheer cliff-faces in dense colonies.

Description: Agave guiengola is a fairly fast growing agave with few soft succulent leaves. It’s uniquely shaped, silvery-bluish leaves makes it a very unique statement in the landscape and it is considered by some collectors to be the most spectacular large agave because of its sculptural form. Plants in habitat are mostly single while the more common cultivated clones sucker profusely.
Derivation of specific name: The species name guiengola refers to the Cerro Guiengola, the mountain where the species was first discovered.
Rosettes: 90-120 cm. tall by 120-180 cm. acaulescent, with few spreading open leaves ( ca. 25 to 30 leaves at maturity) that lay more horizontally than most Agaves.
Leaves: Thick, ghostly-pale, glaucous, very broad at the base ovate to ovate lanceolate and taper to brown terminal spines. Nearly plane above and narrowly channelled apically. Along the edge of the 30-55 cm long leaves there are few to many dark-colored variously serrated teeth (this is a variable trait) The teeth alternate in size between small and large ones along the leaf margins. There is also some variation in leaf size and colour.
Inflorescence: When mature this plant produces a 150-200 cm spike flowering from near the base.
Flowers: Yellow inconspicuous, 33-35 mm long, almost tubeless with distinct tepals and the insertion of the ﬁlaments at the base. The flowers attract hummingbirds.
Blooming season: Spring to summer. Typicality it flower only at maturitv once every 15-25 years and the main crown dies after blooming.
Fruit: Capsules 22-24 mm long, oblong, thin walled.
Remarks: This plant shows relation to Agave bracteosa and Agave ellemeetiana, but its monocarpic rather than polycarpic habit set off Agave guiengola from either of the species mentioned.

Subspecies, varieties, forms and cultivars of plants belonging to the Agave guiengola group 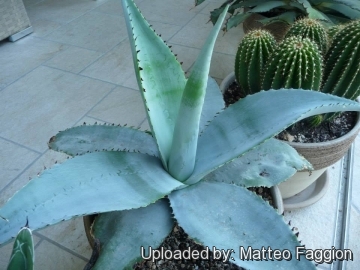 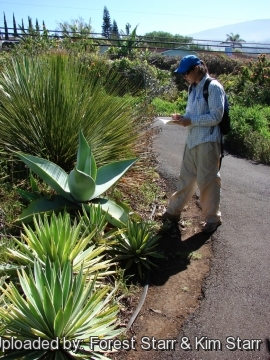 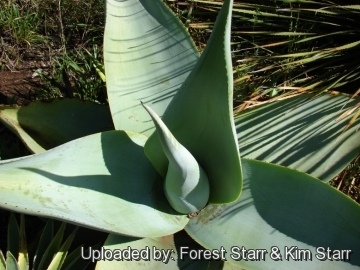 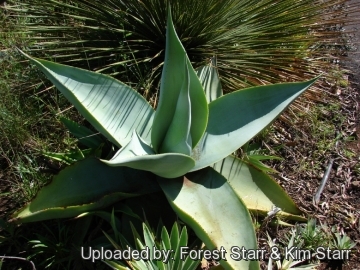 Cultivation and Propagation: This is one of the few Agaves that might do best in some shade as the leaves tend to burn in hot blazing sun. It likes regular water but don't soak it wet as it seems to suffer from edema from over watering (They enjoy a little water during winter period too). It's also somewhat cold sensitive, protect from freezing temperatures to avoid disfiguring the foliage.
Propagation: Offsets (New plants are freely produced basally between the leaves) Plants in cultivation sucker or produce offsets profusely (while plants in habitat usually stay solitary), but as it ages, offsets become fewer and fewer. Seed grown plants are much more likely to be solitary.