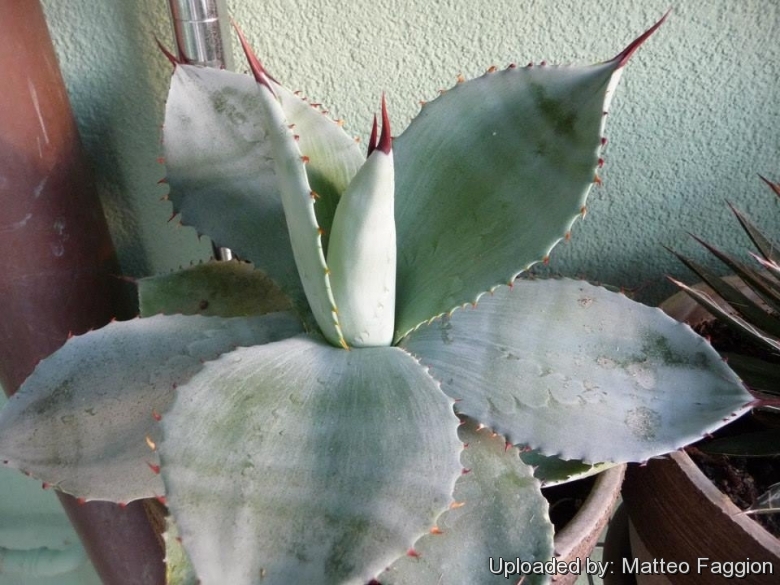 Description: Agave pygmaea (originally described as: pygmae) is a dwarf agave that often develops rosettes with some offsets. It is part of the variable complex of Agave seemanniana and might merely be a depauperate form, a consequence of its arid, limestone habitat.
Rosettes: Rarely exceeding 30 cm in diameter.
Leaves: 12-28 cm long, glaucous or grey-green leaves that are usually quite flat and conspicuously narrowed at the base.
Flowers: Only 32-35 mm long, compared with 47-63 mm for Agave seemanniana, but with otherwise similar proportions.

Subspecies, varieties, forms and cultivars of plants belonging to the Agave seemanniana group

Cultivation and Propagation: It is a stunning specimen plant for containers or a well drained spot in the garden. It tend to be slow grower, but worth the effort. Grow it in porous soil with adequate drainage. Itdo well in full sun or a lightly shaded area. Water thoroughly when soil is dry to the touch. In winter watering this plant can be done once every 1-2 months, there is no need to mist the leaves. It is theoretically hardy to -3° C, particularly when dry but it is best to avoid severe freezing temperatures. Heat Tolerance: good.
Propagation: Relatively easy to propagate by seeds or by suckers (if available) Remove the basal suckers in spring or summer and let the cuttings dry for a few days before inserting in compost.. only problem is the logistics of getting to the suckers - very sharp spines and suckers usually right up against, or underneath the mother plant.
Uses: These striking plants are wonderful when used for accent or simply to provide some all year round foliage colour and often used in a pot as a patio plant, they make an eye-catching statement and along with other evergreen plants in pots, can be moved around to change the scenery or position to give more shelter.