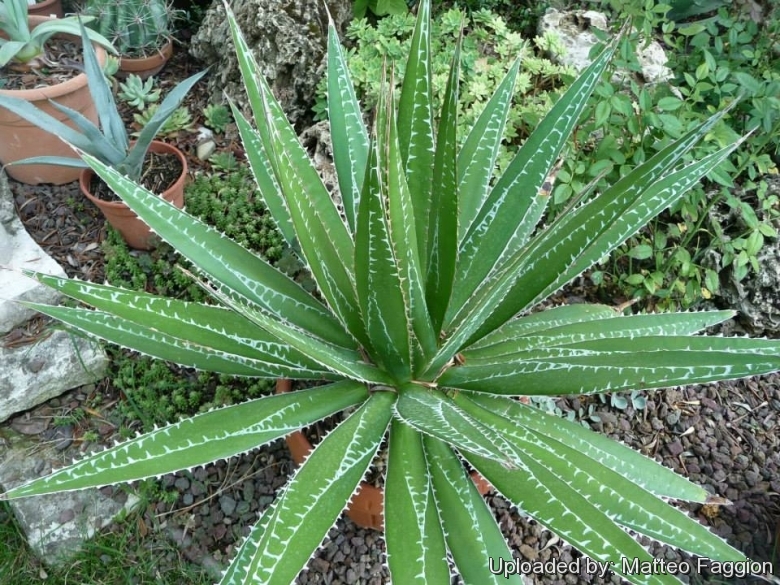 Agave impressa Photo by: Matteo Faggion
As this plant grows, the impressions from the teeth of the new leaves imprint stunning white markings on the leaves which form an amazing pattern on the plant.

Origin and Habitat: Agave impressa is found in a small area neat Escuinapa, Sinaloa, Mexico (also abundant in the Sierra de los Huicholes).
Typical Locality: 13 miles East of Escuinapa.
Altitude range: 100-300 metres above sea level.
Habitat and ecology: It grows in tropical regions where the summers are hot and wet and winters are mild and dry. It dwells among volcanic rocks in open woodland together with field grasses. It is associated with Agave nayaritensis.

Description: Agave impressa is a distinctive small to medium sized Agave with no close relatives. The symmetrical rosettes with spreading light green, gracefully marked with distinct pairs of white imprints that converge near the leaf tip. The leaves are proportioned with blunt teeth and spines. This species is quite unlike any other plant in the genus. The 2 to 3 metres tall flower spike is unbranched with greenish yellow flowers from tip to near base. It may be related to Agave pedunculifera.
Stem: Almost stemless.
Rosette: Usually single, subcaulescent. Occasionally with secondary shoots from the lower axils of an old rosette. This may be due to earlier injures.
Leaves: Openly spreading linear to lanceolate, about 40-60 cm long by 5-9 cm in width, pale yellow-green to red-coloured with conspicuous white bud-printing on upper surface, plane to hollowed above, convex below, thickly fleshy with viscid adhesive sap and little fibre. Margin horny, continuous, 2-3 mm wide, light to dark grey. Teeth evenly spaced, mostly 3-5 mm long, 1-1.5 cm apart, straight or slightly curved, flattened grey like margin. Terminal spine stout, 3-5 cm long, subulate, sharp to blunt at tip, flat and broad at base above, rarely channeled.
Inflorescence: The inflorescence is a racemose erect, spike, up to 3 m tall, flowering almost from the base, the base closely bracteate.
Flowers: Green in bud, yellow with anthers, 35-40 mm long, in twos and threes on slender forked pedicels 2-2.5 cm long. Ovary slender, 17-20 mm long, 4 mm in diameter, fusiform. Tube short, 1.5-2 mm deep, 7 mm wide at apex. Tepals equal, thin, 17-18 long, 4-5 mm wide, ascending, partially recurved, linear-elliptic, the outer flat, the inner wider. Filaments, very slender, flattened, 35-40 mm long white;15-16 mm long, yellow.
Blooming season: Late-winter early-spring (January to March).
Fruits (capsules): Elongated to ovoid 15-18 long, 8-10 mm thick, sharply beaked.
Remarks: It is named for the impressed or printed patterns of spiny leaf-margins formed by waxy deposits when juvenile leaves are in contact with each other. 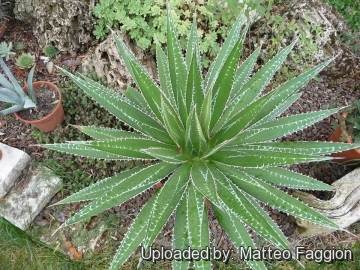 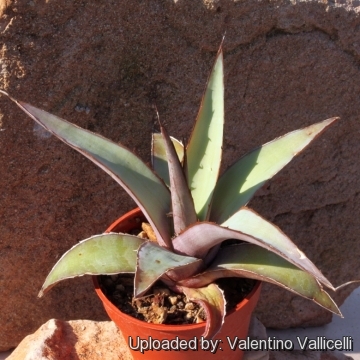 Pot 5.5 cm Ø. The sun also gives the plant a red hue around the edges which accents the white marks and green leaves beautifully Photo by: Valentino Vallicelli 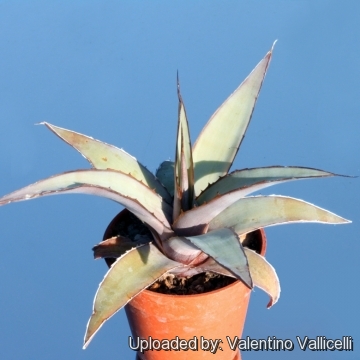 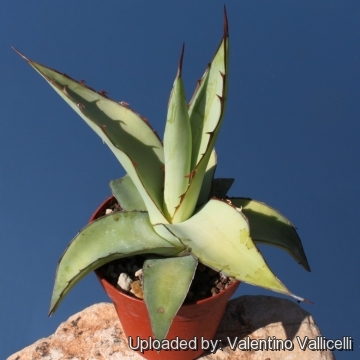 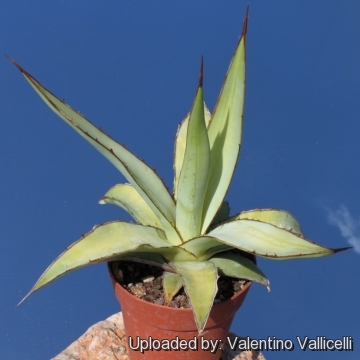 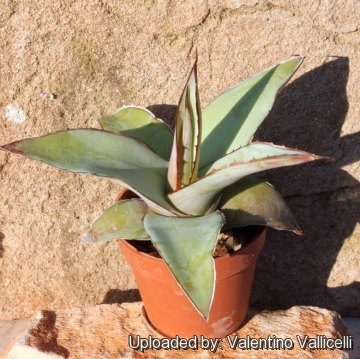 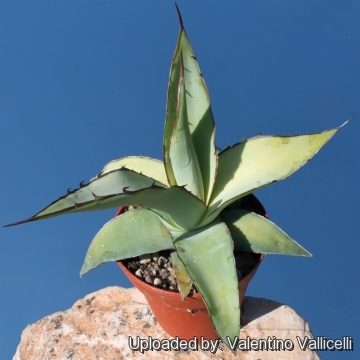 Cultivation and Propagation: Agave impressa is a tricky plant that is very particular about its growing conditions and require the right maintenance in order to keep it happy. It presents difficulties in culture and is doubtless sensitive to frost. Try it in a location such as under an eave where it can get full to part sun with regular summer irrigation and shelter from winter rains.
Hardiness: In cultivation this beautiful Agave has proven a little tender and should only be attempted where it can be grown safe from a hard frost.
Traditional uses: The viscid leaves were used as a paste for curing wounds in horses.