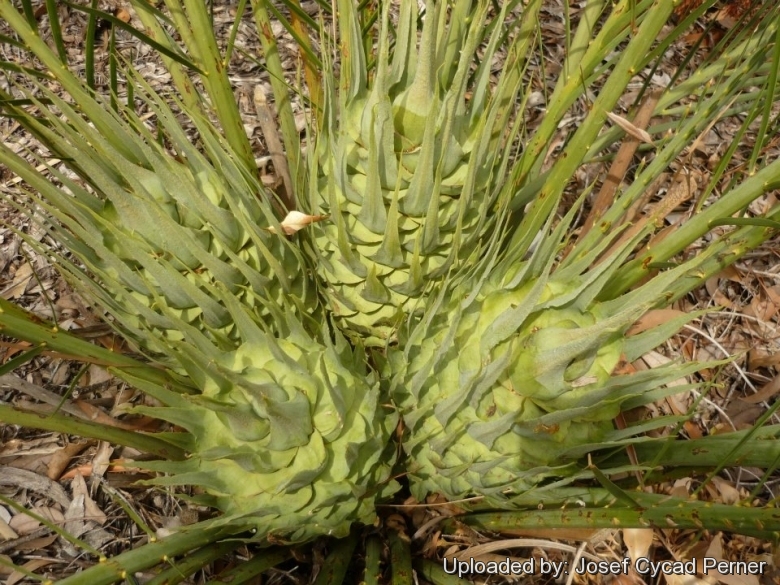 Origin and Habitat: Macrozamia riedlei occurs in the southwestern part of Western Australia, Australia. Populations occur from Dwellingup to Albany and further west to the coast. This is a widespread and abundant species (Number of mature individuals 100000-120000). Generation length 60 years.
Habitat and Ecology: This species occurs in dense stands as an understorey plant in jarrah forests and woodlands and also occurs in low scrub on lateritic soils. Macrozamia riedlei has its cyanobacteria-infected coralloid roots (symbiotic roots that have the ability to fix nitrogen) well buried beneath the soil surface; the bole of the plant is also protected and can regenerate new leaves following fire. Arid zones subjected to periodic wild- or managed fire are usually low in nitrogen and thus the ability to fix nitrogen is a definite advantage and its capacity to fix nitrogen is related to the time since it was last burnt. Nitrogen losses through volatilisation during fire may be restored through the activities of symbiotic nitrogen-fixing organisms. Nitrogen-fixing species are common in open-forests and include leguminous shrubs (such as Acacia, Daviesia and Pultenaea), non-leguminous shrubs (such as Casuarina) and cycads (such as Macrozamia). Macrozamia riedlei contributed about 19 kg/ha of nitrogen to a coastal community in Western Australia —perhaps an unusually large amount for open forests. Rapid growth of leaves and coralloid roots in the first year after burning is associated with maximal rates of nitrogen-fixation. These rates decline with increasing time after fire. Their input may vary according to any root damage during fire and according to population changes. In Macrozamia riedlei the transfer of pollen, either by wind or insects (beetles), has shown that biotic and abiotic agencies can potentially facilitate pollination individually or as a dual strategy. Although this species has declined in parts of its range due to habitat loss, it is an extremely abundant and resilient species that is not regarded as threatened.

Cultivation and Propagation: Macrozamia riedlei is easy to grow and suitable for well drained sites in temperate or subtropical areas and will tolerate cool conditions in winter, as well as moderate frosts and does well in both wet and drought environments. This species is pretty fast growing and in good conditions can speed it up considerably and could go from seed to coning size plants in 3-4 years. Well-grown plants have a distinctive ornamental appearance. This plant may be cultivated as an indoor plant in temperate countries.
Exposition: It can be grown in full sun to partial shade, best with some protection from afternoon heat but not in constant deep shade. Generally speaking the plants that are in hot, full sun grows faster and looks slightly blue-green. Shadier habitats make it look limey green and more ordinary.
Soil: Needs a well drained sandy or sandy loam spot, with deep soil, neutral or basic (tolerate limestone) but will still thrive in less than ideal conditions. Mulch with organic materials (bark or leaf mould).
Moisture: Water when dry. Drought tolerant.
Fertilization. Because of its growth habit, fertilize only when terminal bud begins to swell, indicating the start of the annual growth cycle.
Hardiness: It should be protected from extreme cold. (USDA Zones 9-11). Though it can handle some cold, it sustains leaf damage at -2° .
Salt aerosol tolerance: It is salt resistant and is even happy living out on seaside condominium balconies.
Maintenance: Minimal; removal of offsets if desired, removal of spent fronds
Use: Landscape as cultivated perennial in warm, coastal areas, it makes a great accent or specimen plant and can be used in beachside plantings. Several can be planted together for a lush, tropical effect. Plant on three to five-foot-centers to create a mass planting. Use near the patio, in mixed foundation plantings or in perennial beds. It is a spectacular house-plant or interior-scape specimen in cool areas tough enough to survive occasional neglect and harsh indoor environments. It is very well suited to bonsai culture.
Warning: This plant is poisonous, producing a toxin called cycasin that affects the gastrointestinal tract and nervous system. Poisonous Parts: Fleshy seeds, stems, roots, leaves. Protect pets and instruct children to never eat or chew any plant material without permission. Poisoning of sheep with Chronic ovine hepatosis following feeding of Macrozamia riedlei nuts has been reported.
Edibility: Macrozamia riedlei contains a substantial amount of starch in the stem, which the early settlers in Western Australia extracted, but beware that the processed flour is toxic if large quantities eaten. The stems and half-buried stems were frequently dug up for the purpose of obtaining the starch they contain: 'The pith of the stem is dried either in the sun or by heating in an oven, shredded up and carefully soaked in water for at least six hours to remove the toxin. It is then shaken up, and filtered, the milky fluid sediment is washed several times, dried slowly, and finely powdered, and is ready for use. Over summer the plant produces what looks like a pineapple and in autumn the nuts ripen into a deep red colour. The nuts from this plant have been successfully used as food by Indigenous Australians - however eaten raw by European explorers incurred poisoning. Aboriginal people would pulp the nuts and turn it into a pancake type thing which they would cook on a rock next to the fire. By all reports is that it taste just like chicken and has a bread like flavour with a hint of coconut.
Propagation: Seeds. The germination process is slow and difficult to achieve in cultivation, after fertile seeds are collected, they usually need several months of storage before the inner embryo is ready to germinate. Therefore, it is best to clean the seeds of external fruit and set them aside before attempting to propagate the seeds. Seeds should be sown in shallow container, lightly covered with sand, and after germination, potted off in small pots of moderately rich, light soil. The growing plants do best in partial shade.