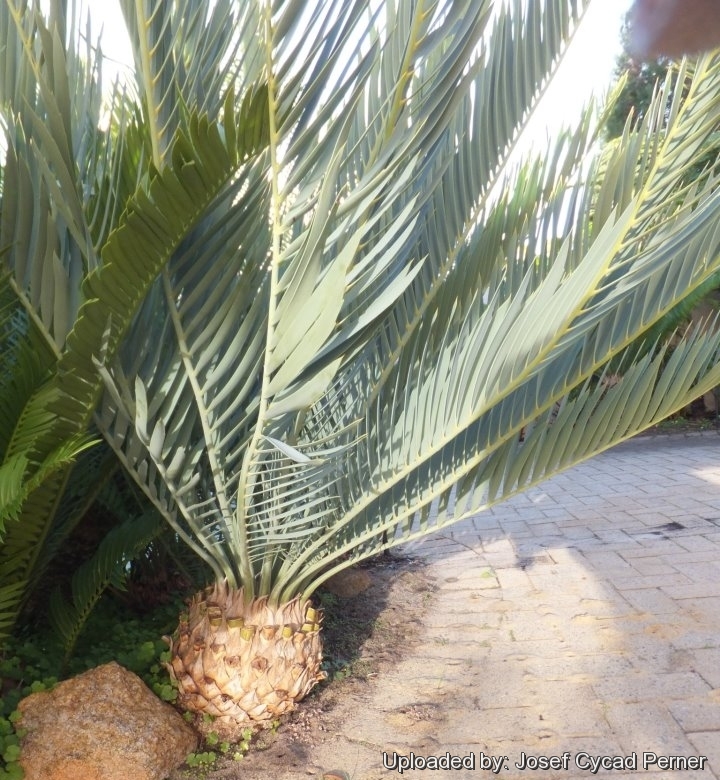 Origin and Habitat: Encephalartos nubimontanus is extinct in the wild and used to occur in the Drakensberg in the Limpopo province, South Africa. Plants were found along the mountain range to the north and east of Penge. Originally known from 66 plants, only 8 were counted in a 2001 survey and none could be found in a 2004 survey despite very careful searching. The species is popular with collectors and there has been much poaching activity in the Limpopo Province of South Africa.
Altitude range: This species occurred at an altitude of 1,000 m.
Habitat and Ecology: Plants used to occur in low open deciduous woodland on cliff faces and in direct sunlight, but the known subpopulations were extirpated by collectors. However, the efforts to re-propagate this plant in private collections, nurseries and conservatories, ensures this plant never dies out, by getting its descendants into many gardens across the world.

Description: Encephalartos nubimontanus is one of the rarest blue cycads that is believed to be virtually extinct in the wild. It is a spectacular arborescent palm-like species, that slowly grows up to 2.5 m tall, with a crown of arching silvery-blue, leaves up to 1.4 metres long, and distinctive blue green cones. Encephalartos nubimontanus was first described by this name by P.J.H Hurter in 1995. (In 1996 P.J Voster described it as Encephalartos venetus.). As with all cycads this species is dioecious. Male plants may carry up to 15 cones, whereas only one or two occur on the females.
Derivation of specific name: The specific name 'nubimontanus' (Latin nubis, blue-black, and montanus, mountain) translate into ‘growing on the blue-black mountain'.
Stem: 2.5 m tall, 35-40 cm in diameter. It may form clusters of offsets.
Leaves (fronds): 110-140 cm long, blue or silver, dull, strongly keeled (opposing leaflets inserted at 45-70° on rachis); rachis blue, straight, stiff, slightly twisted in some leaves; petiole straight, with no prickles; leaf-base collar prominent; basal leaflets reducing to spines (few).
Leaflets lanceolate, concolorous, overlapping upwards, not lobed, insertion angle acute (less than 45°); margins flat; upper margin entire (no teeth), or lightly toothed (1-3 teeth); lower margin entire (no teeth), or lightly toothed (1-3 teeth); median leaflets 17-25 cm long, 15-25 mm wide.
Male cones: 2-5, narrowly ovoid or fusiform, bluish-green, 25-40 cm long, 5-11 cm diam.
Female cones: 1-3, ovoid, blue-green, 30-40 cm long, 18-20 cm diam.
Seeds: Ovoid, 35-38 mm long, 23-30 mm wide, sarcotesta red.
Similar species: Encephalartos nubimontanus is similar to Encephalartos cupidus, differing in the larger and arborescent habit and the longer leaves with longer petioles and often recurving tips. Apical cone-scales in both seed and pollen cones of E. nubimontanus are sterile and extended, unlike those of E. cupidus, and cones are glaucous rather than dark green. The female cones of E nubimontanus are also very like those of Encephalartos middelburgensi, Encephalartos dyerianus and Encephalartos eugene-maraisii. 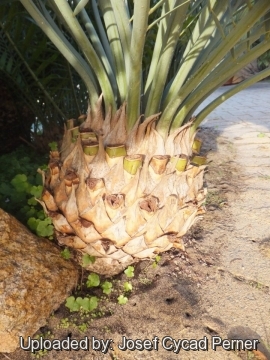 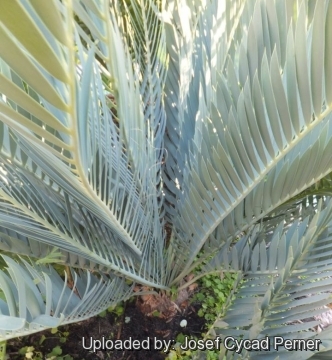 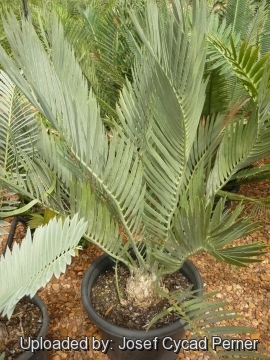 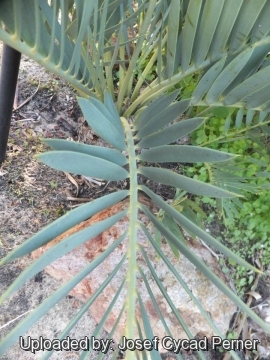 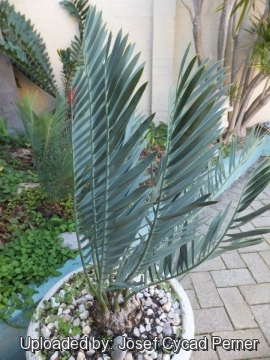 Encephalartos nubimontanus Photo by: Josef Cycad Perner
Send a photo of this plant.

Cultivation and Propagation: Encephalartos nubimontanus is the fastest growing blue leaved African cycad, more vigorous than other members of the 'Eugene-maraisii complex', it forms clusters of offsets, handles wetter conditions and prefers full sun. It is hardy, adaptable and striking in appearance. As a garden subject, it is one of the most spectacular of all cycad species and is quite adaptable in cultivation. When young they can be grown as a container plant and eventually transplanted into the garden. As a garden plant, this cycad will usually hold two or three crowns of leaves, all in good condition. Likes lots of water in the growing season.
Growing rate: This species is a fast grower and in 5 to 8 years will develop into a nice plant. It responds well to cultivation provided it is grown in sun, is well drained, with sufficient moisture in frost-free conditions. It is best to grow young seedlings on until the leaves are about a metre high before planting in the open ground.
Soils: It grows in all sorts of soil type, but prefer well drained, gritty soil with plenty of water, especially in dry weather.
Transplanting: This species transplants easily as a mature plant, although it is recommended to remove all of the leaves before doing so. This makes for easier handling and the plant will recover sooner due to less moisture loss.
Exposure: It thrives and grows best in filtered sun or shade. When grown in full sun, the leaves are a little shorter and less likely to be damaged by wind. The leaves of those plants grown in the shade can become stretched out and damage the caudex if they break off close to their base.
Waterings: In cultivation prefers moist soil with good drainage for optimal growth. But it is eventually drought resistant. Irrigation systems can be detrimental to cycads, damaging the leaves and stems from the pressure of the water as well as over-watering.
Fertilization: Naturally undemanding for nutrients, it responds very well to regular applications of fertilizer. Growth can be greatly improved through the application of fertilizers. Most growers find that a fertilizer having an even NPK (Nitrogen, Phosphorus, Potassium) balance, and supplemental trace elements, provides a good start for cycads.
Wind tolerance: It prefers a sheltered position providing protection from the prevailing winds.
Hardiness: It is suited to subtropical and warm temperate regions. Frost may burn the leaves but will not easily kill established plants.
Propagation: It may be propagated by seeds. They are among the easiest plants to germinate, but appears to need shade for successful germination. It is sown on a bed of clean coarse sand which has a bottom heat of 25-28°C. The seeds are pushed into the sand so as that they are level with the surface of the sand. Water each day and within two months the seeds begin to germinate by producing a root followed by leaves. Within10 months the seedlings are removed and potted into a 3 litre plastic sleeve containing a well-drained growing medium which contains some agricultural lime. Within a year these seedlings need to be repotted into 30 cm pots to encourage the plants to develop. Keeping encephalartos in small containers prevents them from growing. Once in the open ground they develop well.
Known hazards: Many members of the Zamiaceae are poisonous, producing toxic glycosides known as cycasins, one should use gloves when handling or cleaning them.