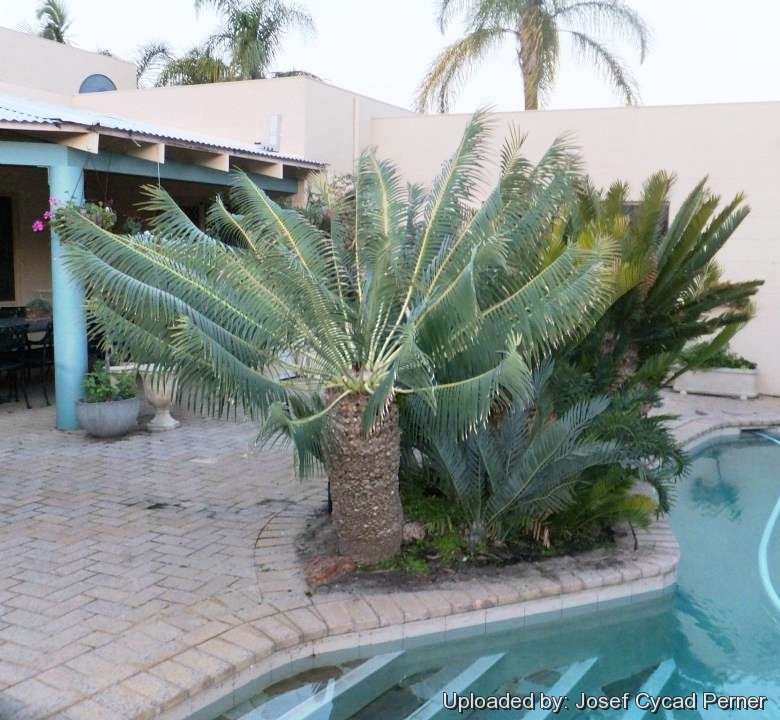 Origin and Habitat: Encephalartos inopinus is native to a small area along the Steelpoort and Olifant rivers and adjacent catchment areas in the Mpumalanga province, South Africa. Estimated area of occupancy (AOO) – km2. There may be no plants left in the wild.
Altitude range: 600 to 800 metres above sea level.
Habitat and Ecology: This species occurs sparsely, usually in thick bush on north-facing very steep slopes, ledges or cliffs, or on rocky outcrops. They grow in skeletal soil or no soil, on steep to precipitous slopes in gorges on dolomite. The rainfall ranges from a meagre 375 mm to 750 mm annually. Some plants hang from inaccessible narrow ledges high up in gorges. The vegetation type is referred to as Dolomite Mountain Bushveld. Generation Length 200 years. Encephalartos inopinus has been heavily exploited by collectors experiencing a rapid decline with only 81 remaining mature individuals in 2004. The species might be extinct in the wild as poaching had continued after 2004. In addition, large troops of baboons damage immature cones and this could explain the absence of seedlings.

Description: Encephalartos inopinus is a small, very slow-growing multistemmed cycads to 2 m tall, that sucker freely from the base. The stem is very characteristic, a tawny-beige colour with mixed large and small leafbases which give a 'patchwork' effect and terminates in a crown of 1-1.5 metres long fronds with a straight yellow rachis ( leafstalk). The rachis has a spiral twist along its length and this gives a graceful feathery effect to the leaf-crown. The leaf colour is a fresh silvery-green.
Derivation of specific name: Its specific name (inopinus = unexpected) refers to Dr Dyer's surprise when, in 1964, he saw specimens of this plant after believing that all cycad species in South Africa had been already been located and described.
Stems: Plants have 1-8 slender trunks, suckering from base, each about 2(-3) m long and 170-250 mm wide (including the persistent leaf bases), spreading or somewhat reclining from an early age. Some stems up to 6 m in length have been recorded but these are procumbent.
Cataphylls (scale leaves): Lanceolate, about 4-5 cm long, tomentose.
Leaves (fronds): Straight or slightly up-curved and twisted near tip, 0.8-1.5 m long including petiole 10-20 cm long, glabrous except for woolly back of pulvinus. Rachis yellow, 8-13 mm thick flat or ridged above, rounded below. Pulvinus (joint-like thickening at the base of leaflets that facilitates growth-independent movement) up to 3-5 cm long, 4-5 cm broad, with dense brown wool. Median leaflets entire, 14-21 cm long, 8-12 mm broad, entire not overlapping 1-2 cm apart; bluish-green with silvery bloom on under surface when young, becoming green with age; leaflets broadly attached to frond axis, curving downwards, only slightly narrowed at base, not very rigid, with 13-21 veins evident but not raised on the lower surface. usually pungent, with entire margin or occasionally with 1-2 minute teeth on the lower margin near and directed towards the apex. Bottom leaflets reduced to prickles. The angle of the lower leaflets is deflexed from the rachis, a characteristic not seen in any other South African cycad.
Male cones: 1-3 narrowly ovoid, on peduncles about 5 cm long and 1,5 cm thick, (8-)10-18(-25) cm long 4-6(-8) cm wide the same silvery-green colour as the leaves even at maturity. Scales dense about 2 cm long 1.7-2 cm broad, with acute lateral margin.
Female cones: 1-3, ovoid, green, 30 to 35 cm long and 15 to 20 cm in diameter. The terminal facets of the cone scales are thickly covered with small white, raised papillae giving a silvery matt appearance to the terminal facet. The surrounding upper and lower facets are a shiny green colour.
Seeds: Ovoid or oblong, 20-25 mm long, 15-20 mm wide, sarcotesta pale orange.
Note: Encephalartos inopinus is an enigma in the genus and is not readily confused with any other. It has an arresting vegetative appearance quite unlike any other. The spreading crown of flat, bluish leaves with well-spaced, entire, falcate, broad-based leaflets that droop away from the rachis are immediately distinctive. Being glabrous, glaucous and having smooth scale surfaces, the female cones are almost indistinguishable from those of Encephalartos dyerianus. It has not been found possible to hybridize E. inopinus with any other species. Although first discovered in 1955, this species was not described until 1964 by South African botanist R. Allen Dyer. 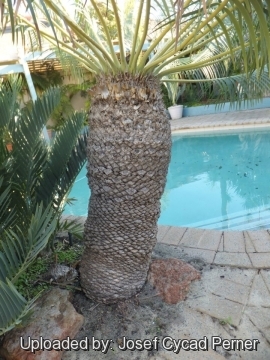 Encephalartos inopinus Photo by: Josef Cycad Perner
Send a photo of this plant.

Cultivation and Propagation: Encephalartos inopinus is an adaptable plant well suited to warm temperate and subtropical climates, and can handle light frosts. It can be grown in full sun without its leaves burning. Its colour makes it a good subject for the nightscape. Its beauty and ease of horticulture make it one of the finest cycads for use in the garden. It is partially drought tolerant, salt tolerant, and completely wind tolerant. As a garden plant, this cycad will usually hold one or two crowns of leaves, all in good condition. As a seedling, it often loses its previous year's leaves before the new leaves emerge. The seedlings need plenty of room for the tap root to develop and require very good drainage.
Growth rate: It is a long lived slow growing plant taking 20 or more years for one of these to produce a cone, so patience is a must.
Soils: It responds well to deep, fertile, slightly acidic, well drained, soil enriched with compost.
Waterings: In cultivation prefers plenty of water, especially in dry weather for optimal growth. But it is eventually drought resistant.
Fertilization: Naturally undemanding for nutrients, it responds very well to regular applications of fertilizer. Growth can be greatly improved through the application of fertilizers. Most growers find that a fertilizer having an even NPK (Nitrogen, Phosphorus, Potassium) balance, and supplemental trace elements, provides a good start for cycads.
Exposure: It will grow in partial shade, however best results are obtained growing the seedlings in full sun.
Warning: Seeds are poisonous.
Hardiness: They do best in a tropical or sub-tropical climate and should be kept totally dry in winter at or around 10°C but demonstrate a remarkable degree of cold resistance and may tolerate light frost for short periods if dry, however heavy frosts would probably be fatal.
Propagation: Plants are seldom available from nurseries, however they are also easy to propagate from seeds. They can also be propagated from suckers with some patience and experience.