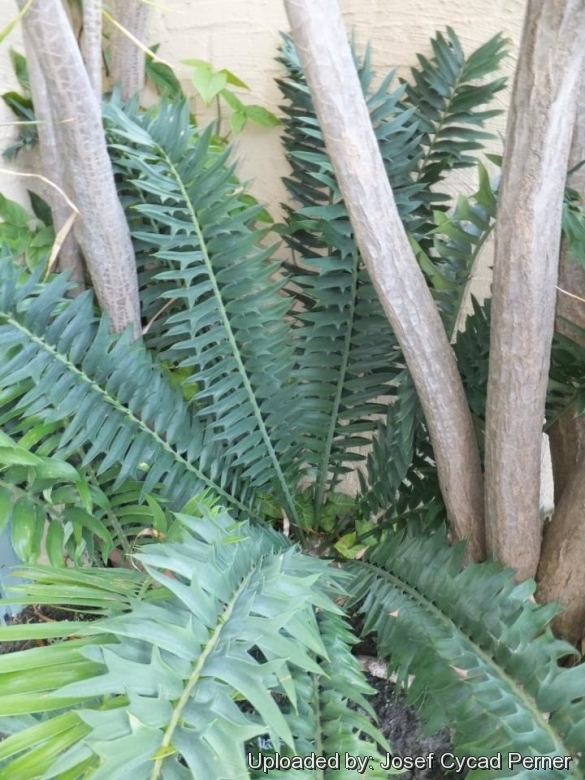 Origin and Habitat: Encephalartos arenarius occurs in a small area in the Alexandria district of the Eastern Cape in South Africa. Populations are found from Nanaga in the west to Canon Rocks in the east. The main subpopulations occur near the town of Alexandria. Extent of occurrence 250(450) km²; area of occupancy about 20 km², occurrence at less than five locations. The overall population is less is estimated to be 850-1,500 mature individuals.
Altitude range: 100 to 200 metres above sea level.
Habitat and Ecology: Encephalartos arenarius is a strikingly attractive, medium-sized cycad which now occurs only rarely in shady sites on the densely wooded stabilised sand-dunes (arenarius = of sand) and scrub bush. Most of the plants occur on moderate to steep slopes in sandy soil. The annual rainfall varies from 725 to 875 mm and no frost occurs. The major threat to this species is removal by collectors. As it occurs in dune sand, it is easily removed by poachers. This has been the main cause of decline over the past 50 years. Some have also been destroyed by habitat destruction (bush clearing to make way for pastures). Scattered individuals occur in agricultural lands and cleared dunes. Some of its common companions in the coastal dune forest include: Apodytes dimidiata, Atalaya capensis, Carissa bispinosa, Dipcadi brevifolium, Euclea natalensis, Gasteria acinacifolia, Gymnosporia capitata, Mimusops caffra, Mystroxylon aethiopicum, Olea europaea subsp. africana, Searsia natalensis, Schotia afra, Sterculia alexandri and Zanthoxylum capense.

Description: Encephalartos arenarius, also known as the Alexandria Cycad, is without doubt one of the most beautiful species from South Africa's eastern Cape Province. Its is a medium-sized cycad, distinguished by the its silver or grey sheen of its adult leaves. The broad, gracefully lobed leaflets make it an exceptionally desirable cycad. Mature female plants produce contemporary a single green cone with red glossy seeds and whorl of leaves. There are two distinct forms of E. arenarius, the green form and the rare blue form that takes on a very different form as a mature plant. However, juvenile plants of this species can look very similar to the "Blue Leaf" form.
Stem: Erect, unbranched or more usually branched from the base with basal suckers competing for the lead, subterranean or aerial up to 1 m tall, and only very rarely up to 3 m long and reclining on the ground covered in sand and leaf mould, up to about 20-30 cm diameter, with densely grey woolly bracts.
Roots: Coralloid (meaning coral-like) roots. These roots contain symbiotic cyanobacteria that fix gaseous nitrogen from the atmosphere and provide essential nitrogenous compounds to the plant. This can be a great advantage, as many cycads grow in nutrient-poor habitats.
Leaves (fronds): to 1-1.5 m in length, including petiole 20-25 cm long, white or grey woolly when young except under surface of leaflets, glabescent except base of petiole and pulvinus. Rhachis sharply at the tip and often slightly twisted. Leaflets, lobed, light green when young gradually darker green with age, to blue- green , glaucous when young, overlapping in the apical half and in V disposition, more spaced in the lower half and reduced in size occasionally to one prickle. Median leaflets oblong-lanceolate, flat or slightly twisted and slightly curved upwards, 12-16 cm long, 2.5-4 cm broad with 1-1.5 cm broad attachment, closely but not prominently veined on lower surface, pungent with upper margin entire or occasionally a single tooth and lower margin usually with 3 rarely 4 flat or slightly twisted pungent lobes.
Female cones: Usually solitary on short stout peduncles, barrel-shaped, somewhat glaucous, light green when mature (35-)50-45(-60) cm long and 20-25(-30) cm in diameter. Median scales about 6.5-7 cm long, 5 cm broad and 4 cm thick vertically, with lateral ridges extending into incurved lateral lobes up to 2 cm long. The cone scale opens for 5 to10 days in April to May (Autumn).
Male cones: 1 to 3 in number, 300-500 long and 80-150 mm in diameter, light green when mature. Median scales 3-3-5 cm long, 2-25-2-5 cm broad; bulla face projected into a beak about 1 cm long.
Seed: Shiny red when mature, up to about 5 cm long, 2-2.5 cm broad with fleshy beak.
Related species: Encephalartos arenarius forms a group with Encephalartos horridus, Encephalartos latifrons, Encephalartos lehmannii, Encephalartos longifolius and Encephalartos trispinosus. These species occur in a relatively small area in the Eastern Cape Province of South Africa, usually in dry conditions. They carry solitary cones, and several of them have markedly glaucous leaves and/or very prominently spiny-lobed leaflets. None of them has prickles on the petiole. 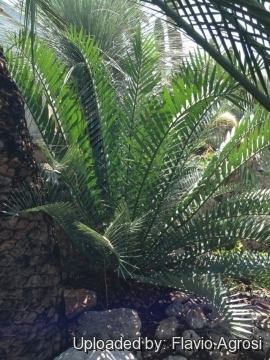 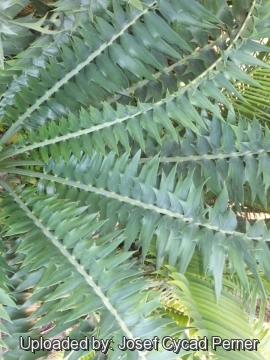 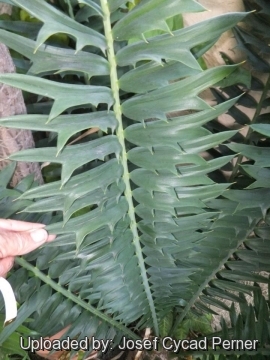 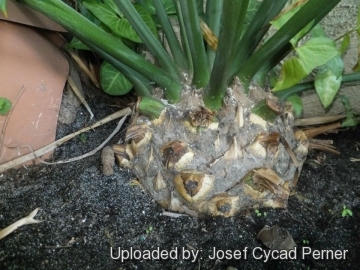 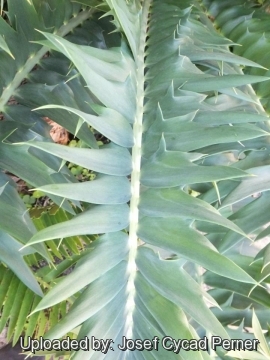 Blue form. Photo by: Josef Cycad Perner
Send a photo of this plant.

Cultivation and Propagation: As a garden subject, Encephalartos arenarius, requires excellent drainage, and prefers light shade or moderate sun. It is an adaptable plant well suited to warm temperate and subtropical climates, but should be protected from frost. When young they can be grown as a container plant and eventually transplanted into the garden. As a garden plant, this cycad will usually hold two or three crowns of leaves, all in good condition.
Growth rate: It is a small growing cycads, but responds well to cultivation provided it has a well-drained soil, frost-free conditions and regular watering during the dry months.
Soils: It prefer gritty or sandy soil with plenty of water, especially in dry weather. Encephalartos arenarius, requires excellent drainage. During the year feed the plant with a generous layer of compost.
Transplanting: This species transplants easily as a mature plant, although it is recommended to remove all of the leaves before doing so. This makes for easier handling and the plant will recover sooner due to less moisture loss.
Waterings: In cultivation prefers moist soil with good drainage for optimal growth. But it is eventually drought resistant. Irrigation systems can be detrimental to cycads, damaging the leaves and stems from the pressure of the water as well as over-watering.
Fertilization: Naturally undemanding for nutrients, it responds very well to regular applications of fertilizer. Growth can be greatly improved through the application of fertilizers. Most growers find that a fertilizer having an even NPK (Nitrogen, Phosphorus, Potassium) balance, and supplemental trace elements, provides a good start for cycads.
Exposure: It thrives and grows best in semishade but can tolerate full sun as well.
Wind tolerance: It prefers a sheltered position providing protection from the prevailing winds.
Hardiness: Frost sensitive (USDA zones 10-11)
Warning: Cycad seeds are toxic to humans, one should use gloves when handling or cleaning them.
Pests and diseases: Most cycad seeds are commonly attacked by the Curculionid weevil (Antliarhinus zamiae). Leaves and cones are prone to scale and mealybug. The gall-midge also attacks young leaves.
Propagation: It may be propagated by seeds. They are among the easiest plants to germinate.Hand pollination is necessary for a successful seed harvest in cultivation. Collect pollen as soon as it starts shedding. If a slight tapping of the male cone sheds pollen, then the cone is ready to be harvested; store pollen at -15ºC for best results. The female cone scales have to be monitored to check if they are open. The window of the scale opening varies with plants, from three days to two weeks. After female cones have been collected, the seeds are left to mature for a year before sowing at the beginning of summer. For best results, sow seeds in river sand on a heated bench at 24-28ºC. Germination should start three weeks after sowing though some will take longer. It is easily transplanted and can also be propagated from suckers.