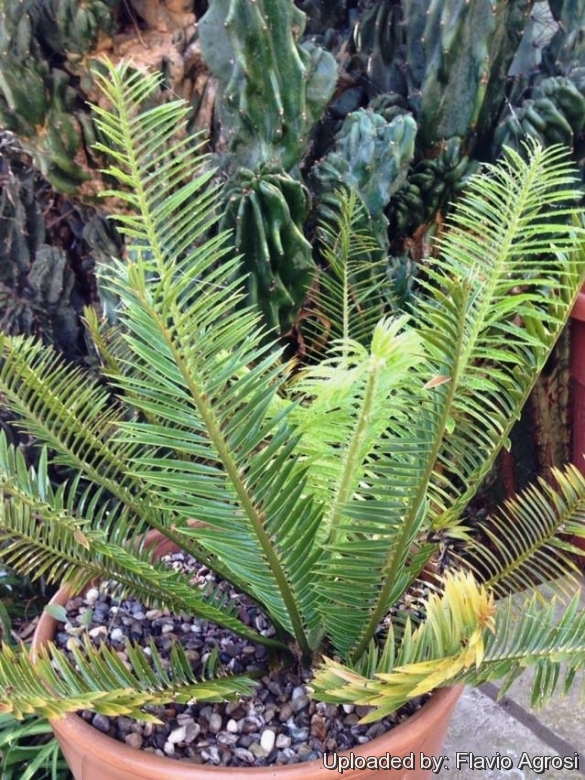 Origin and Habitat: Encephalartos caffer is a widespread species that is found in mainly in the Eastern Cape province and in an isolated subpopulation in KwaZulu Natal, South Africa. In the Eastern Cape it has been recorded from Humansdorp in the south, then northwards to areas in the Albany district and continuing northwards to an area near Kentani, just across the Great Kei river. Still further to the north, it is found in the Oribi Gorge Nature Reserve in Kwa-Zulu Natal province. The species seems to consist of numerous isolated subpopulations with approximately 10,000 mature individuals.
Altitude range: 300-700 metres above sea level.
Habitat and Ecology: This species typically grows in the coastal belt and up to 100 km inland in grassland but can also occur in thicket when grasslands are not burnt frequently. It is often found growing among rocks. Summer rainfall varies from 1000 mm at the coast to considerably less inland. The plants are long-lived and highly resistant to drought and harsh treatment. The seeds are much sought after by baboons, who carry them and thus facilitate distribution. The habitat of E. caffer is somewhat threatened as a result of clearing for agricultural purposes. This species has also been affected due to over-collecting for ornamental purposes.

Description: Eastern Cape dwarf cycad (Encephalartos caffer) is a rare cycad from the genus Encephalartos. It looks like a small palm tree with fernlike leaves, but producing cones, often resembling those of a pine but far large (source of the so-called 'Kaffir bread). The leaves have a distinctive ruffled, feathery appearance, caused by the numerous, clustered leaflets being irregularly twisted from the central stalk and pointing out in different directions. New leaves are brown and woolly at first but most of the hair is lost as they mature, although they never become completely smooth or glossy.
Derivation of specific name: From the Caffrara region of eastern Cape Province.
Stem: Subterranean or with crown slightly exposed, unbranched or very rarely branched, up to about 30(-40) cm long, 15-25 cm in diameter, the top woolly, dome-shaped between the bud and the mature leaves.
Roots: Coralloid (meaning coral-like) roots. These roots contain symbiotic cyanobacteria that fix gaseous nitrogen from the atmosphere and provide essential nitrogenous compounds to the plant. This can be a great advantage, as many cycads grow in nutrient-poor habitats.
Leaves (fronds): Long, pinnate, dark green, up to about 14 in a crown, up to 40-90(-100) cm long, including the petiole. Petiole 1/4-1/3 as long as the rhachis, at first woolly towards the base, soon nearly glabrous. Rhachis erect at first or arcuate and recurved towards the tip, rounded below, bluntly 4-ribbed on the upper side, produced beyond the leaflets at the top, brown woolly when young. Leaflets very numerous and crowded, weakly discolorous, overlapping upwards, insertion angle horizontal. sometimes twisted at various angles to the axis, longest about the middle of the leaf, the lowermost becoming much reduced, all narrowly linear-lanceolate, contracted above and decurrent at the base, sharply spinulose-acute, not lobed, entire or with 1-2 teeth near the apex on young plants, middle leaflets 5-10 cm long, about 8-10 mm broad, pubescent when young, about 10-nerved, with strong marginal nerves, somewhat decurrent at base.
Cones: Cycads are dioecious, meaning that there are separate male and female plants, and the female produces seeds while the male produces pollen. The cones are mostly solitary on stout peduncles, glabrous, made up of a series of spiraled scales, usually shining, greenish-yellow when mature.
Male cones: Solitary or 2-3 together, cylindric, oblong-lanceolate, 20-30 cm long, 5-12 cm in diameter, scales rhomboid and concave at the top, rugose. Median scale 2-5-3-5 cm long, 2-5 cm broad. Peduncle almost sessile to up to about 15 cm long.
Female cones: Oblong or ellipsoid, about 15 cm long and 10 cm in diameter; scales in 4-6 spirals, broadly transversely subrhomboid-elliptic, concave, green, with orange margins, nearly glabrous, about 45 mm broad. Peduncle 6-7 cm long and 3-5-4 cm in diameter.
Seeds: In the female, two largish, glossy, scarlet-coloured seeds about 37-39 mm long, 23-25 mm in diameter are formed on top of each cone scale.
Related soecies: Encephalartos caffer is related with Encephalartos ngoyanus, Encephalartos cerinus and Encephalartos umbeluziensis. I is distingiushed within this group by the short, dark green leaves with a spine-free petiole and entire, crowded, irregularly overlapping leaflets, and the woolly crown. Emerging leaflets are dull and densely tomentose, whereas those of E. ngoyanus are glossy and spersely hairy.

Cultivation and Propagation: Encephalartos caffer is an adaptable plant well suited to warm temperate and subtropical climates, and can handle light frosts. With its bright foliage heightened by full sun is a commanding accent plant in the general landscape and makes an excellent tubbed specimen It can be grown in full sun without its leaves burning. Its beauty and ease of horticulture make it one of the finest cycads for use in the garden. It is partially drought tolerant, salt tolerant, and completely wind tolerant. As a garden plant, this cycad will usually hold one or two crowns of leaves, all in good condition. As a seedling, it often loses its previous year's leaves before the new leaves emerge. The seedlings need plenty of room for the tap root to develop and require very good drainage.
Growth rate: It is a long lived slow growing plant taking 15 to 20 years for one of these to produce a cone, so patience is a must.
Soils: It responds well to deep, fertile, slightly acidic, well drained, soil enriched with compost.
Waterings: In cultivation prefers plenty of water, especially in dry weather for optimal growth. But it is eventually drought resistant.
Fertilization: Naturally undemanding for nutrients, it responds very well to regular applications of fertilizer. Growth can be greatly improved through the application of fertilizers. Most growers find that a fertilizer having an even NPK (Nitrogen, Phosphorus, Potassium) balance, and supplemental trace elements, provides a good start for cycads.
Exposure: It will grow in partial shade, however best results are obtained growing the seedlings in full sun.
Traditional uses: These species yields stem sago and seeds, yielding a flour used for porridge or bread. The large, nutlike seeds found between the scales of the cones are no delicacy, being starchy and bland, but provide a useful food to many peoples. However, they are toxic in their natural state, and have to be processed quite elaborately before they are safe to eat. The poisonous properties are remove by pounding, soaking, and repeatedly changing the water, after which the macerated starchy substance is ground and baked. It may be sun-dried and stored for later use.
Hardiness: They do best in a tropical or sub-tropical climate and should be kept totally dry in winter at or around 10°C but demonstrate a remarkable degree of cold resistance and may tolerate light frost for short periods if dry, however heavy frosts would probably be fatal.
Propagation: Plants are available from nurseries in many areas, however they are also easy to propagate from seeds. They can also be propagated from suckers with some patience and experience.