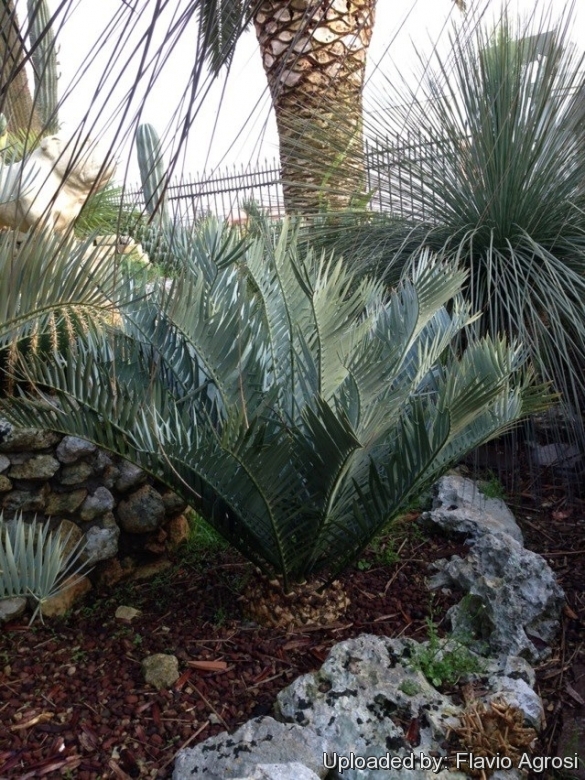 Origin and Habitat: Eastern cape, South Africa. Encephalartos trispinosus occurs in the lower reaches of the Bushman's River and the Great Fish River in the districts of Bathurst, Alexandria and Albany. The species is fairly common.
Altitude range: Occurs from 100 up to 600 metres above sea level.
Habitat and Ecology: It grows in arid low succulent shrubland on rocky ridges and slopes. They are found in full sun on rocky outcrops or in the shade in dense thickets of spiny vegetation. The climate is hot in summer and cold in winter with regular frost. The rainfall varies between 600-725 mm a year which occurs mainly in the summer. E. trispinosus is threatened by illegal collection of wild specimens from its habitat.

Description: The Bushman's river cycad Encephalartos trispinosus is one of the slower growing species of the genus. It has erect or reclined stems to one metre tall and ascending then arching grey-green fronds to 1.2 metres long, with not recurved leaflet, lobed only in top third. A mature plant can develop 4-6 stems with a number of suckers emerging at the base of the plant, or sometimes unbranched. It lives to a great age, provided that the plant grows in ideal conditions and is treated in the correct manner.
Derivation of speciefic name: The species name trispinosus refers to the three spined lobes of the leaflets.
Stem: Up to 1 (-1.2) m tall, 25-3 cm in diameter, branched from the base tending to lean over with time.
Leaves: Variable in size, c. 75-125 cm long, including the petiole 15-22 cm long, glabrous, mostly in shades of glaucous grey-green to bluish-grey depending on which population they originate from, becoming green with age. Rhachis stiff usually recurved and twisted towards the tip. Leaflets 1-3-lobed with a spine borne at each point, spaced and reduced in size towards base, occasionally overlapping in upper half. Median leaflets linear-lanceolate, or oblong-lanceolate, often somewhat falcate, 10-18 cm long, 1-5-2-5 cm broad, pungent with terminal spine up to 6 mm long, lobes 1-3 cm long from lower margin.
Cones: Blue-green, yellowish-green or bright yellow, shortly and stoutly pedunculate variable in size. Only one cone is produced per stem, occasionally two.
Male cone: Subcylindric, narrowed to both ends 250-350 mm long, 60-80 mm in diameter. Median scales about 20-50 mm long, 2.5-28 mm broad with sharp lateral angles; bulla face projected into a beak 7 mm long, terminal facet about 6 mm broad and 6 mm wide vertically.
Female come: Solitary, broadly subcylindric, rounded or narrowed to apex, 400-500 mm long, (160-)180-200 mm in diameter. Scales deeply wrinkled. Median scales 70-90 mm long, 60-70 mm broad and 30-54 mm thick vertically, with lateral ridges extending into the incurved lateral lobes 20-30 mm long
Seeds: Pale red to orange 4-5 cm long and 2 cm diameter, with fleshy beak
Phenology Cones are produced in midsummer. (January-December in South Africa ) and mature in the autumn (April). The pollination of the female cones takes place in April-May.
Related species: This species was considered to be a variant of Encephalartos horridus or Encephalartos lehmannii until Dr R.A. Dyer reclassified it in 1965. 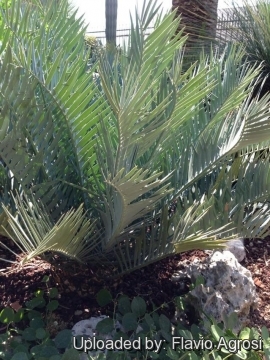 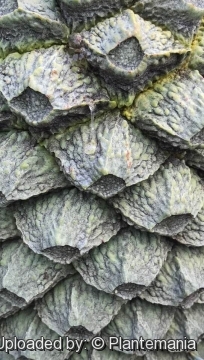 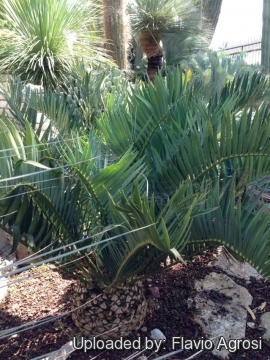 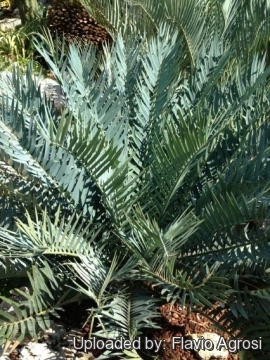 Cultivation and Propagation: Encephalartos trispinosus is an adaptable plant well suited to warm temperate and subtropical climates, and can handle light frosts. With its bright foliage heightened by full sun is a commanding accent plant in the general landscape and makes an excellent tubbed specimen. It can be grown in full sun without its leaves burning. Its colour makes it a good subject for the nightscape. Its beauty and ease of horticulture make it one of the finest cycads for use in the garden. It is partially drought tolerant, salt tolerant, and completely wind tolerant. As a garden plant, this cycad will usually hold one or two crowns of leaves, all in good condition. As a seedling, it often loses its previous year's leaves before the new leaves emerge. The seedlings need plenty of room for the tap root to develop and require very good drainage.
Growth rate: It is a long lived slow growing plant taking 15 to 20 years for one of these to produce a cone, so patience is a must.
Soils: It responds well to deep, fertile, slightly acidic, well drained, soil enriched with compost.
Waterings: In cultivation prefers plenty of water, especially in dry weather for optimal growth. But it is eventually drought resistant.
Fertilization: Naturally undemanding for nutrients, it responds very well to regular applications of fertilizer. Growth can be greatly improved through the application of fertilizers. Most growers find that a fertilizer having an even NPK (Nitrogen, Phosphorus, Potassium) balance, and supplemental trace elements, provides a good start for cycads.
Exposure: It will grow in partial shade, however best results are obtained growing the seedlings in full sun.
Warning: Seeds are poisonous.
Hardiness: They do best in a tropical or sub-tropical climate and should be kept totally dry in winter at or around 10°C but demonstrate a remarkable degree of cold resistance and may tolerate light frost for short periods if dry, however heavy frosts would probably be fatal.
Propagation: Plants are available from nurseries in many areas, however they are also easy to propagate from seeds. They can also be propagated from suckers with some patience and experience.