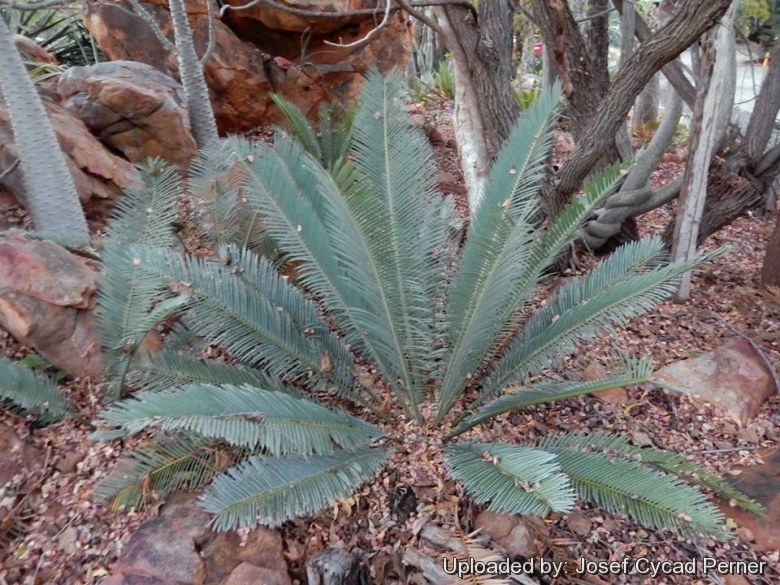 Origin and Habitat: Encephalartos cerinus is restricted to the Buffelsrivier Valley in the Tugela Ferry area of central KwaZulu-Natal, South Africa.
Altitude range: 500 to 900 metres above sea level.
Habitat and ecology: It grows in a hot and dry habitat mostly on east-facing on sheer cliffs overlooking river gorges, usually in very shallow soil. Plants occur in rocky grassy areas with a few shrubs. Encephalartos cerinus was only discovered in 1970 and has already been plundered almost to extinction, the number of plants still remaining with some frequently quoted numbers of between 20 and 70 plants in a single locality, whereas other reports suggest the species is Extinct in the Wild. It is one of the rarest cycads.

Description: Encephalartos cerinus is a very attractive small cycad with a short trunk which can be subterranean or emergent and with dark silvery-blue-green leaves. Usually between 1 and 3 trunks with few suckers being produced. In habitat the plants usually drop their leaves before coning, and throwing new leaves.
Distinguish characteristics: This species is characterised by solitary, orange yellow cones and by the heavy waxy grey-blue coating covering leaves and cones alike. The epithet "cerinus" (waxy) allude to this thick covering of wax.
Trunk (caudex): Subterranean or partly uncovered when growing on rock, up to 30 cm long and 20-25 cm diameter branching sparingly from the base with time.
Leaves (fronds): 8-15 (20) deciduous during time of drought, 80-120 (150) cm long, with the leaflets directed towards the tip of the leaf with an angle of 150-180º and somewhat overlapping. Leaflets dark blue green or silvery green, opaque, with a thick waxy cover, that if rubbed, releases a characteristic odor, the median leaflet 15-18 cm long, and 12 mm broad tapering at both ends. Petiole naked, unarmed 12-18 cm long. Margins entire with 1-2 teeth on the lower part.
Cones: It is a dioicus species and each plant produces only one cone at a time. Both male and female cones are blue/green turning yellow-orange at maturity except in fully shaded situations and are always covered with a thick waxy bloom.
Male cones (pollen cones): Spindle shaped to subcylindrical 55-60 cm long, 8-10 cm diameter borne on an 80 mm long peduncle.
Female cones (seed cones): Ovate, tapering to the apex, 30-35 em long, 15-18 cm diameter.
Seeds: Deep pink to red.
Related species: Encephalartos cerinus is related with Encephalartos villosus and Encephalartos ngoyanus that grow widespread in more humid regions. A third relative, Encephalartos umbeluziensis occurs in a hot dry area but does not seem to favour rock faces.

Cultivation and Propagation: Encephalartos cerinus is an adaptable plant well suited to warm temperate and subtropical climates. It is not so moisture-tolerant than most South African cycads. It can also be grown in full sun without its leaves burning. Its beauty and ease of horticulture make it one of the finest cycads for use in the garden. As a garden plant, this cycad will usually hold one or two crowns of leaves, all in good condition.
Growth rate: It is a long lived slow growing plant taking many years even to develop a trunk - most of caudex stays underground - but not one of the slowest of the Encephalartos.
Soils: It prefer well drained, gritty soil.
Waterings: In cultivation prefers plenty of water, especially in dry weather for optimal growth. But it is eventually drought resistant.
Fertilization: Naturally undemanding for nutrients, it responds very well to regular applications of fertilizer. Growth can be greatly improved through the application of fertilizers. Most growers find that a fertilizer having an even NPK (Nitrogen, Phosphorus, Potassium) balance, and supplemental trace elements, provides a good start for cycads.
Exposure: It thrives and grows best in full sun or partial shade.
Hardiness: It should be kept totally dry in winter at or around 10°C, but it demonstrates a remarkable degree of cold resistance and may tolerate light frost for short periods if dry.
Propagation: It may be propagated by seeds. They are among the easiest plants to germinate.