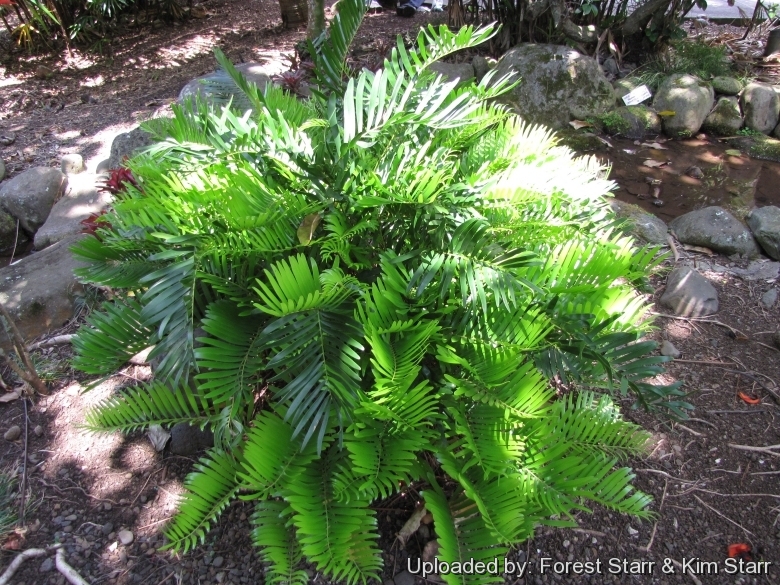 Origin and Habitat: Florida, Georgia (Southeastern U.S.A., Northern America) and sporadically in the Bahamas where it occurs on Andros, Grand Bahama, Great Abaco, Long, and New Providence Islands. It has been collected in western Cuba, the Cayman Islands, and south-central Puerto Rico where one small population persists. It has been estimated that the population size of Zamia integrifolia is in excess of 30,000 plants in the wild. The one population in western Cuba consists of 133 individuals.
Habitat: It grows in the beach or away from the shore line but very near to the coast on well-drained sands or sandy loam soils. During bad storms, the salt water had to be washing over them. Zamia integrifolia has declined mainly due to habitat destruction for housing developments and agriculture. In the early 20th century, a large number were collected as part of a commercial starch industry.
Ecology: Like other cycads, pollination is by certain insects, namely the belid weevil Rhopalotria slossoni. It seems that during hurricanes, seeds get washed out to sea and sometimes end up on other islands.

Description: Zamia integrifolia is a small clumping, tough, woody cycad. It is similar in many respects to Zamia pumila, but with slightly narrower and untuntheed leaflets.
Stem: 3–25 cm high and diameter, but is often subterranean and tuberous. At first solitary, but over time it will divide dichotomously or branch from the side forming a multi-branched cluster, with a large, tuberous root system, which is actually an extension of the above-ground stems.
Crown: Leaves 2-15 in terminal rosettes up to 2 m in diameter. The leaflets without distinct apical teeth serve to distinguish Zamia integrifolia from Zamia pumila.
Cataphylls 1-2 cm long, sheathing at first, with a pair of inconspicuous stipules.
Leaves: 1-pinnately compound, somewhat palm-like, 60–120 cm long, evergreen, upright, herbaceous, rachis smooth, bearing 10-30 pairs of leaflets (pinnae). Each leaflet is linear to lanceolate or oblong-obovate to somewhat rounded apically, commonly entire (untoothed or only slightly so), median ones 8–25 cm long and 0,5–2 cm broad. They are often revolute; petioles with stipules and smooth.
Flowers (cones): It is dioecious, having male or female plants that emerge from the center of the apex of the trunk. Male cones (pollen bearing) 1-30-clustered, pedunculate, dark reddish brown, cylindrical to ovoid-cylindrical, apex acute, growing to 3–15 cm long and 8-20 mm in diameter. Female cones (seed bearing) solitary or up to 5-clustered, pedunculate, dark reddish brown, elongate-ovoid with a distinct acuminate tip 6–15 cm long and 4–6 cm in diameter.
Seeds: Red to orange-red, ovoid, 1-2 cm long.

Notes: Historically there has been much confusion as to the identity of this species and as consequent there are numerous synonyms and redescriptions in the older literature. At one extreme some authors included all these plants in a single broadly defined species, Zamia pumila, while other botanists have recognized several more narrowly defined species. The Flora of North America treats the American plants as Zamia integrifolia which is native to Florida and differs in the smaller, more commonly entire (untoothed or only slightly so) leaves usually less than 25 cm long than the true Zamia pumila from the Carribbean islands, although some references continue to refer to these populations as Zamia pumila. 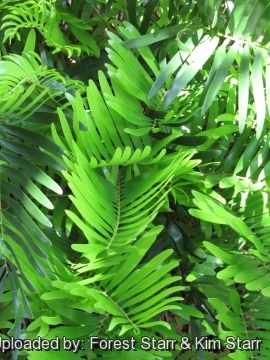 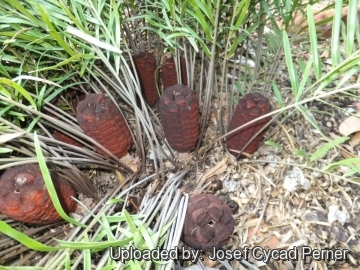 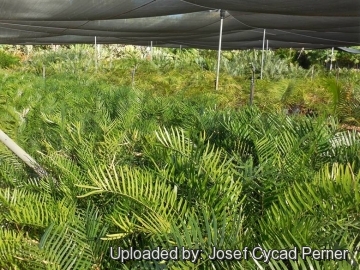 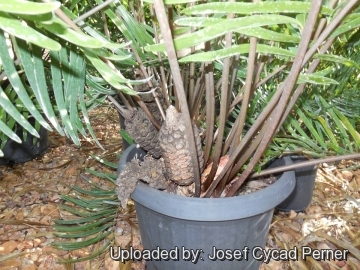 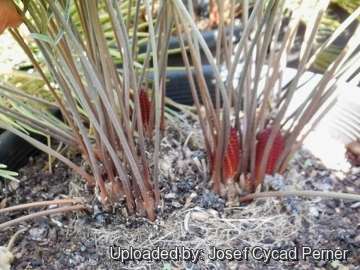 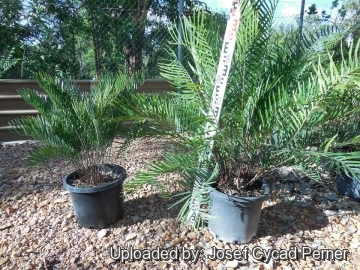 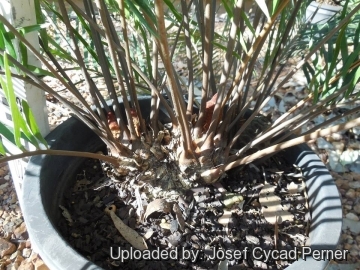 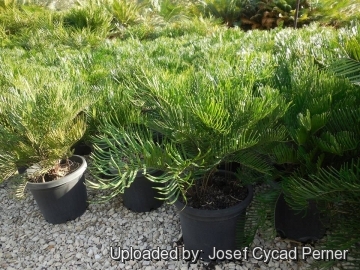 Cultivation and Propagation: Zamia integrifolia is easy to grow and a very popular plant in cultivation. Because of its ruggedness, low maintenance and drought tolerance it is commonly grown in tropical and subtropical regions. This species is rather fast and in good conditions can speed it up considerably and could go from seed to coning size plants in 3-4 years. This plant may be cultivated as an indoor plant in temperate countries.
Exposition: It prefers filtered sunlight to partial shade as colour bleaches when in full sun; best with some protection from afternoon heat but not in constant deep shade. Generally speaking the plants that are in a situation under shrubs are more vigorous.
Soil: Needs a well drained sandy or sandy loam spot, with deep soil, neutral or basic (tolerate limestone) but will still thrive in less than ideal conditions. Mulch with organic materials (bark or leaf mould).
Moisture: Water when dry. Drought tolerant.
Fertilization. Because of its growth habit, fertilize only when terminal bud begins to swell, indicating the start of the annual growth cycle.
Hardiness: It should be protected from extreme cold. (USDA Zones 9-11) Sustains leaf damage at -2° C.
Salt aerosol tolerance: It is salt resistant and is even happy living out on seaside condominium balconies.
Maintenance: Minimal; removal of offsets if desired, removal of spent fronds
Use: Landscape as cultivated perennial in warm, coastal areas, it makes a great accent or specimen plant and can be used in beachside plantings. Several can be planted together for a lush, tropical effect. Plant on three to five-foot-centers to create a mass planting. Use near the patio, in mixed foundation plantings or in perennial beds. It is a spectacular house-plant or interior-scape specimen in cool areas tough enough to survive occasional neglect and harsh indoor environments. It is very well suited to bonsai culture.
Warning: This plant is poisonous, producing a toxin called cycasin that affects the gastrointestinal tract and nervous system. Poisonous Parts: Fleshy seeds, stems, roots, leaves. Protect pets and instruct children to never eat or chew any plant material without permission.
Edibility: Processed flour, toxic if large quantities eaten. The stems and half-buried stems are edible and were used by Native American people for their yield of a starch, but only after removing the toxin by careful leaching.
Propagation: Seeds. The germination process is slow and difficult to achieve in cultivation, after fertile seeds are collected, they usually need several months of storage before the inner embryo is ready to germinate. Therefore, it is best to clean the seeds of external fruit and set them aside before attempting to propagate the seeds. Seeds should be sown in shallow container, lightly covered with sand, and after germination, potted off in small pots of moderately rich, light soil. The growing plants do best in partial shade. The old plants frequently send up suckers around the base of the trunk. These may be taken off when in a dormant state and rooted, care being taken to remove the leaves to guard against excessive transpiration. The advantage of the "pups" is that you will know its sex, for seedlings you will have to wait several years until the plant flowers to find out.