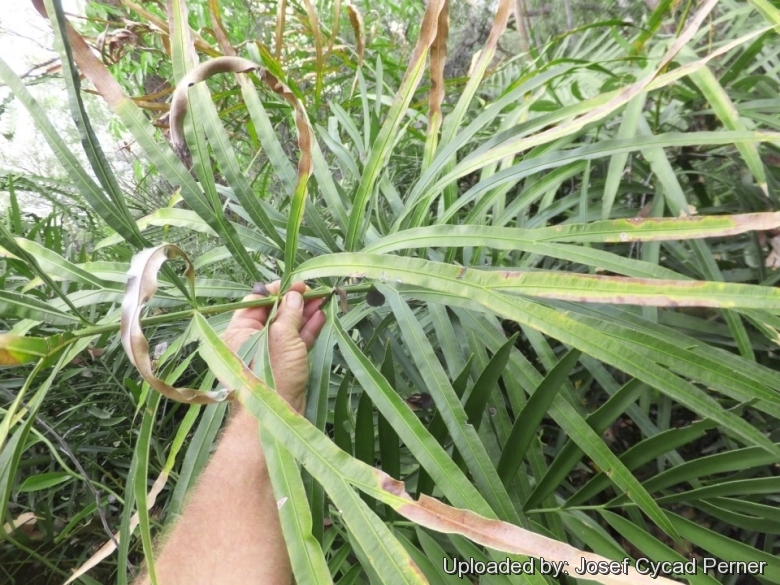 Origin and Habitat: Cycas bifida is found in southern Guangxi and eastern Yunnan provinces in China and Cao Bang, Lang Son and Tuyen Quang provinces in northern Viet Nam. Number of mature individuals ranges from 10000 to 12000.
Altitude range: 100 to 300 metres above sea level.
Habitat and Ecology: This species occurs in low, scrubby but fairly dense mixed evergreen and deciduous woodland or bamboo woodland, often on red terra rosa soils on and around steep karst limestone outcrops, but also on sandy or loamy soils over shales, granites and meta-sandstones. Cycas bifida is locally abundant but many subpopulations are now seriously depleted as a result of the combined effects of plant collection and land clearance for agriculture and forestry and it is therefore listed as Vulnerable. Some of its native locations are on the site of various clashes over the border of Vietnam and China, and still contains numerous land mine fields, protecting the species from poaching. This species is apparently sympatric with Cycas multipinnata in several populations in China, and a range of morphologically intermediate forms that can be interpreted as a hybrid swarm has been observed (see Cycas longipetiolula, excluded names, below). Hybrids are also recorded with Cycas dolichophylla and Cycas diannanensis.

Description: Cycas bifida is one of the more amazing looking cycads that was first recognized as a distinct taxon in western literature by English botanist Sir William Thiselton-Dyer in 1902, who described it as Cycas rumphii var. bifida. This variety was elevated to the rank of species by K.D. Hill in 2002.
Distinguishing features: The most immediately striking feature of this species are the few long, arching fronds with long petioles shooting out of the ground (or a small, dome-shaped caudex) and evenly spaced leaflets which are glossy, thin-textured, comparatively long, broad and bifurcated very near to the base (an ususual condition for a cycad). However, this also occurs in some related taxa, and in a horticultural form of Cycas revoluta that is popular in Japan. The small, soft male cones, the loose, freely peeling sarcotesta lacking a fibrous layer and the verrucose sclerotesta are all features shared by a wider group of related species. Cycas bifida is closely related to the famous Cycas micholitzii, but is easily distinguished by its larger stature, longer, broader and glossier leaflets and by the larger male cones with microsporophylls lacking an apiculus.
Derivation of specific name: The species is named after its dichotomously divided leaflets, a character shared with a few other related species.
Stems: For the most part subterranean, 20–60 cm in diameter and up to 20 cm above ground level.
Leaves: Three to eight to a crown, 2–4 m long and 40–80 cm broad, dark green and glossy, bipinnate, with 27-44 pairs of leaflets, each leaflet dichotomously divided (split in two), linear, 10–38 cm long and 1.5–3 cm broad, papery to leathery in texture. Petiole 0.5–2 m long, armed with spines.
Male cones: Solitary and erect, spindle shaped and cylindrical 15-23 long and 4–6 cm broad, with light yellow tomentose down and an erect apical spine with 1.2–2 cm long sporophylls with 1-3 minute teeth per side.
Female spike: When female inflorescences are present, the genus Cycas can easily be recognized by the loose structure of the inflorescence, as in all the other genera the female inflorescences are compact cones. Instead Cycas bifida carry ovules and seeds on fleshy, leaf-like quite closed megasporophylls about 8–12 cm long, with deep red-brown tomentose down, and 6-8 ovules on an ovate lamina.
Seeds: Ovoid with yellow to yellow-brown sarcotesta. and flattened sclerotesta.
Taxonomic notes: Cycas bifida has been extensively confused in literature with the related species Cycas multifrondis and Cycas micholitzii (K. D. Hill, Cycad Pages); in the Flora of China, it is treated as Cycas micholitzii, a species restricted by Hill to plants from central Vietnam and Laos.

Subspecies, varieties, forms and cultivars of plants belonging to the Cycas micholitzii group

Cultivation and Propagation: Cycas bifida is extremely rare in cultivation and found only in specialized cycad collection and botanical gardens and a perfect specimen for the conservatory. It is suited to tropical regions which have a seasonally dry climate. It is easy to grow, tolerating short dry periods. It is attractive as a young plant because of the elegant feathery fronds. Cycas bifida is suited to pot culture. The rarity combined with the unusual habit make it a very highly sought plant by collectors.
Exposure: It will do well in a shaded spot in the subtropical and tropical garden, colour bleaches when in full sun, best with protection from afternoon heat.
Soil: Needs a well drained spot, with deep soil, but will still thrive in less than ideal conditions.
Fertilizaton: Because of its growth habit, fertilize only when terminal bud begins to swell, indicating the start of the annual growth cycle.
Maintenance: Minimal; removal of offsets if desired, removal of spent fronds.
Hardiness: This species is probably a tropical in its needs.
Use: Landscape as cultivated perennial in warm, coastal areas. House-plant or interior-scape, as container plant in cool areas.
Warning: Petiolar spines are short and well spaced, but still sharp so take care when pruning. All plant parts are considered highly toxic.
Propagation: Seed. As a slow growing plant, the seed can take from 6–18 months to germinate. After fertile seeds are collected, they usually need several months of storage before the inner embryo is ready to germinate. Therefore, it is best to clean the seeds of external fruit and set them aside before attempting to propagate the seeds. Usually seeds are ready to germinate after 2-4 month, the germination is rapid and almost all seeds germinate up within 2 month.