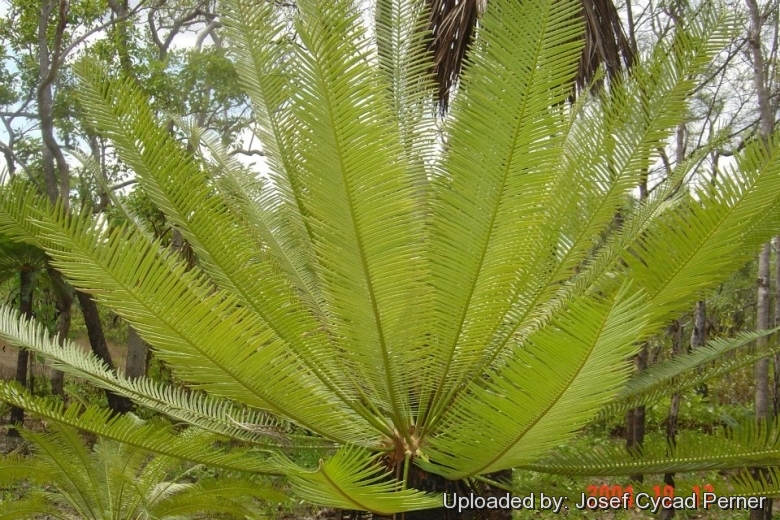 Origin and Habitat: Cycas maconochiei subs. lanata is known from the Northern Territory, Australia. Plants occur from the northern Wingate Mountains and adjacent plains country to the north and west, extending to the coast north of Peppimenarti, and west almost to Port Keats. The total population of this subspecies would number into the tens of millions.
Habitat and Ecology: This species is widespread and in parts extremely abundant, usually on sandy soils in savanna woodland or forest dominated by Eucalyptus miniata and Eucalyptus tetrodonta. Generation Length 40 years. There are no major threats to this taxon.

Description: Cycas maconochiei subsp. lanata is a palm-like plant with a slender trunk, which terminates in a crown of feathery leaves up to 120 centimetres long, orange-tomentose and slightly glaucous when new, becoming dull to semi-glossy bluish green. The scientific name lanata comes from the Latin word “lanatus” for woolly and probably refers to the way the the very woolly crown with densely tomentose cataphylls and emergent leaves. Cycas maconochiei subsp. lanata is not a palm, but a cycad. Cycads are known to be among the oldest group of seed plants on earth, surviving unchanged for millions of years. The flowers are dioecious (individual flowers are either male or female, but only one sex is to be found on any one plant so both male and female plants must be grown if seed is required). The plant is not self-fertile.
Distinguishing characteristics: This subspecies has narrower leaflets with margins strongl curved over backward and downward and thickly woolly cataphylls. Subsp. maconochiei differs in the broader, flatter and more widely spaced leaflets, and the somewhat less densely tomentose cataphylls, and subsp. viridis has broader leaflets that are glossy green.
Stem: Usually less than 3 m tall (rarely to 7 m), 9–14 cm across, markedly variable in stature across its range in particular in that plants from the north-west of the range (around Nardirri) are consistently very much smaller, although similar in all other attributes.
Cataphylls: The cataphylls (Modified leaf, much reduced and thickened, serving to protect the apical meristem in cycads produced in flushes preceding the emergence of cones or leaves.) are thickly woolly.
Leaves (fronds): Numerous, spreading, 70–120 cm long, somewhat keeled in section (opposing leaflets inserted at 130–160° on rachis), with 160–230 leaflets. Petiole more or less spinescent, 18–33 cm long. Median leaflets 9–15 cm long, 3.5–5.5 mm wide, narrowed to 2.5–3.5 mm at base, inserted at 60–80° to rachis, 5–7 mm apart on rachis, orange-tomentose and slightly glaucous when new, becoming dull to semi-glossy bluish green. Margins recurved.
Male cones: Erect 22–33 cm long, 11–14 cm across.
Female flowers: Like other Cycas species, the female plants do not bear cones; instead they carry ovules and seeds on fleshy, openly spaced leaf-like megasporophylls 23–27 cm long. Lamina 5–6 cm long, 14–20 mm wide, with 20–30 lateral teeth; apical spine 10–15 mm long.
Seeds: 30–35 mm long, 27–32 mm in diameter, not pruinose.

Subspecies, varieties, forms and cultivars of plants belonging to the Cycas maconochiei group 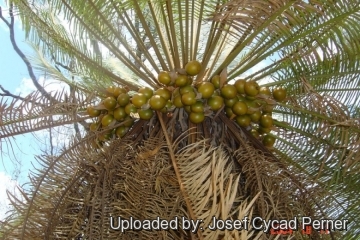 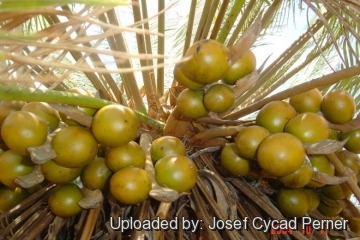 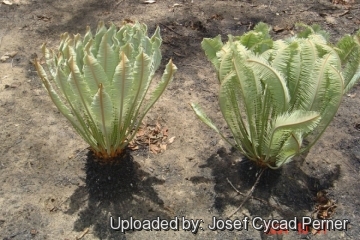 there are yearly fires in the tropical dry seasons which burn a large part of the land, this is a natural part of the lifecycle. Photo by: Josef Cycad Perner 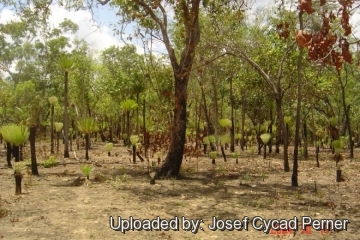 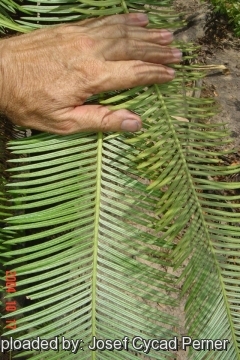 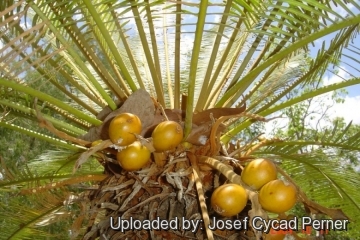 Cultivation and Propagation: Cycas maconochiei subs. lanata is suited to tropical regions which have a seasonally dry climate. It is easy to grow, tolerating dry periods. It makes a beautiful ornamental for tropical and some warm temperate areas but is rather rare in cultivation.
Growth rate: Usually slow growing, however good conditions can speed it up considerably. Because of its growth habit, fertilize only when terminal bud begins to swell, indicating the start of the annual growth cycle.
Exposure: It prefers bright light exposure but colour bleaches when in full sun; best with some protection from afternoon heat.
Soil: Needs a well drained spot, with deep soil, but will still thrive in less than ideal conditions.
Maintenance: Minimal; removal of offsets if desired, removal of spent fronds.
Use: Landscape as cultivated perennial in warm, coastal areas; House-plant or interior-scape, as container plant in cool areas, as well very well suited to bonsai culture.
Propagation: Seed. After fertile seeds are collected, they usually need several months of storage before the inner embryo is ready to germinate. Therefore, it is best to clean the seeds of external fruit and set them aside before attempting to propagate the seeds.