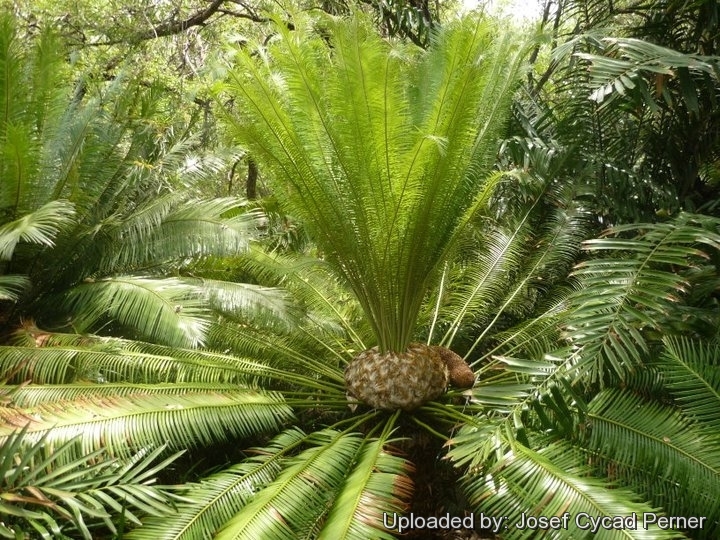 Origin and Habitat: Cycas pectinata is one of the most common and widespread cycads found in Bangladesh, Bhutan, southern China (Yunnan and Guizhou Provinces), northern and eastern India (abundant in the hill forests of Uttar Pradesh, Assam, Manipur, Meghalaya, Sikkim, Darjeeling), Lao People's Democratic Republic, northern Burma (Myanmar (mainland), Malaysia, Nepal, northern Thailand, northeastern Cambodia, and Viet Nam.
Altitude range: Recorded from 300 to 1,300 metres above sea level.
Habitat and Ecology: This species occurs in medium to tall closed forest in difficult terrains on deep, often clay-rich and more fertile soils, usually as part of the general shrub understorey in moderate to deep shade mostly but also in open areas where there is plenty of sunshine. C. pectinata is a plant of medium to higher elevations and moist conditions and grows mostly in zones where the annual rainfall is above 1000 mm. It is recorded from a variety of substrates, but most frequently occurs on clay soils over limestone. Climate is tropical with wet, humid summers (rainy season) and milder, drier winters (dry season). Although often found on limestone substrates, it is by no means restricted to these, and it also occurs on granites and meta-sediments. In China, it grows in dry, open thickets in limestone mountains, red soil in sparse monsoon forests. Hill tribes in Assam, India eat the seeds and emergent leaves are used as a vegetable. The fleshy stem is pounded and used as a hair wash. Although its habitat is continually being reduced, large populations remain, and it is not under any immediate threat of extinction. In Northeast India, the species is under severe threat due to clearing of forest and over collection of male cones for preparation of traditional medicines.

Description: Cycas pectinata is an attractive evergreen arborescent cycad that grows up to 12 metres tall. The stem bears a crown of recurved leaves at the apex with flat, narrow and linear leaflets. The very large, ovoid male cones with long, narrow microsporophylls, those with long apical spines, readily distinguish this species from others in the C. pectinata group. The group is distinguished by the broad, pectinate megasporophylls and the fibrous layer within the sarcotesta. A few spines are present at the base of the petiole.
Derivation of specific name: Latin pectina, a comb, in reference to the long, comb-like teeth of the megasporophylls.
Taxonomic Notes: Cycas pectinata was the fourth species of Cycas to be named, it was named and described in 1826 by Scottish surgeon and botanist Francis Buchanan-Hamilton from.
Stem (trunk): Cylindric, 1 to 12 m tall, 14-60(-90) cm diameter, robust and usually dichotomously branched toward apex when mature and gradually thickened toward base, bark grey or white-gray, smooth toward base of trunk. The tallest Cycas pectinata is a female plant in North Kamrup, Assam which measures 16.1 metres. The tree is the world's tallest Cycas plant.
Leaves (fronds): 30-80(-100) in crown, 1-pinnate, 0.7-1.5(-2.4) m long, 20-30(-40) cm wide, leaf blade oblong-lanceolate, flat or occasionally slightly "V"-shaped in cross section, dark green or grey-green, semiglossy, pale brown tomentose when young, flat (not keeled) in section (opposing leaflets inserted at 170-180° on rachis), with 180-312 leaflets, with white tomentum shedding as leaf expands; rachis consistently terminated by a spine 1-46 mm long. Petiole 10-35(-80) cm long , petiole glabrous, with 6-15 spines along each side above middle part. Basal leaflets not gradually reducing to spines, 50-160 mm long. Median leaflets simple, strongly discolorous, 200-315 mm long, 8-13 mm apart on rachis; median leaflets section flat; margins slightly recurved; apex acute, spinescent to not spinescent; midrib raised above, raised below.
Cataphylls: The cataphylls (Modified leaf, much reduced and thickened, serving to protect the apical meristem in cycads produced in flushes preceding the emergence of cones or leaves.) are narrowly triangular, soft, pilose, articulated.
Male cones: Shortly peduncled, very large, cylindric-ovoid or fusiform up to 30-45(-55) cm long, 16-22 cm in diameter, green becoming yellowish or orange in maturity. Microsporophylls cuneate, 3.5-5 long, 1.2-2.5 cm wide, densely pale brown tomentose, apex thickened, with an upcurved point 3-4 cm long.
Megasporophylls: Like other Cycas species, the female plants do not bear cones; instead they carry ovules and seeds on more than 30, tightly grouped, large, megasporophylls 13-18(-30) cm long, which have pectinate leaf blades and bear (1-)2-4(-6) glabrous ovules on each side of distal part of stalk, glabrous. They are densely covered with hairs.
Seeds: Flattened-ovoid, compressed, 4.5-6 cm long, 4-4.7 cm wide, glabrous, orange, red-yellow or dark brown on maturity, not pruinose. Sclerotesta smooth, sarcotesta with a mixed, thick, fleshy, fibrous layer.
Pollination: Early summer (June-July), seed maturity late winter (February-March). 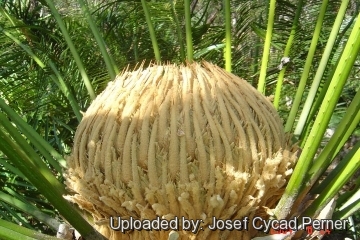 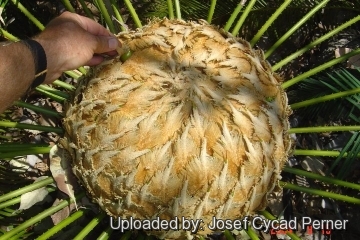 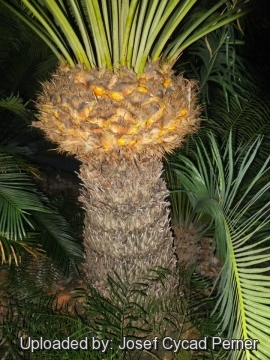 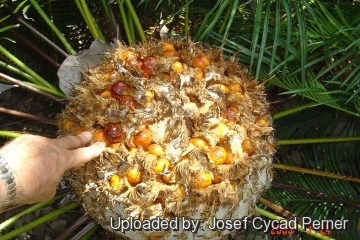 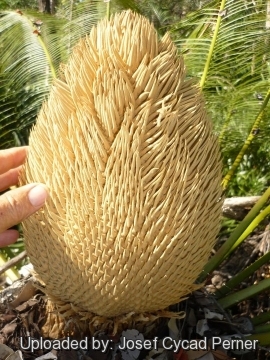 Immature pale cone, this cone is only about half developed, it gets much larger. Photo by: Josef Cycad Perner 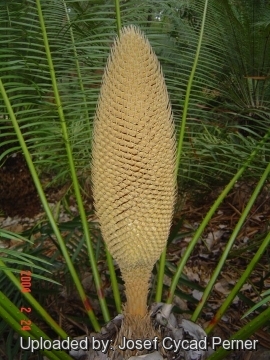 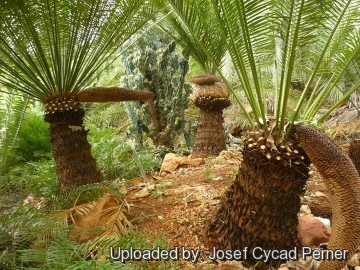 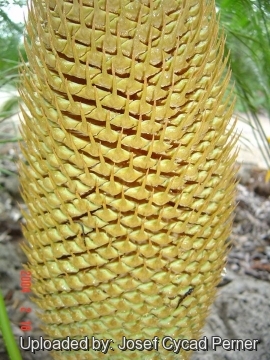 Cultivation and Propagation: Cycas pectinata is an ornamental plant grown in gardens and at public places in tropical regions which have a seasonally dry climate. It is easy to grow, tolerating dry periods. It is often the focal point in a large yard.
Growth rate: Usually slow growing, however good conditions can speed it up considerably. Because of its growth habit, fertilize only when terminal bud begins to swell, indicating the start of the annual growth cycle.
Exposure: It prefers bright light exposure but colour bleaches when in full sun; best with some protection from afternoon heat.
Soil: Needs a well drained spot, with deep soil, but will still thrive in less than ideal conditions.
Maintenance: Minimal; removal of offsets if desired, removal of spent fronds.
Use: Landscape as cultivated perennial in warm, coastal areas; House-plant or interior-scape, as container plant in cool areas, as well very well suited to bonsai culture.
Use as food: Young fronds are eaten as vegetables in Manipur and Sikkim. Seeds of Cycas pectinata are traditionally utilized as a source of starch by indigenous tribes and are eaten raw or roasted in Assam and the bordering region of Meghalaya. Microsporophylls are chewed raw to cure stomach-aches and ulcers. The young microsporophylls are eaten by young men in Meghalaya and Assam, India to enhance male sexual potency. The Hill tribes in Assam eat the seeds and emergent leaves are used as a vegetable. The fleshy stem is pounded and used as a hair wash. Cycas pectinata is In Assam, green mature leaves are used to decorate large numbers of temporary shrines called “Pooja Pandals,” erected to worship deities during festivals. The leaves are used for decoration of the entrance of the marriage pandals and bouquets.
Propagation: Seed. As a slow growing plant, the seed can take from 6–18 months to germinate. After fertile seeds are collected, they usually need several months of storage before the inner embryo is ready to germinate. Therefore, it is best to clean the seeds of external fruit and set them aside before attempting to propagate the seeds.