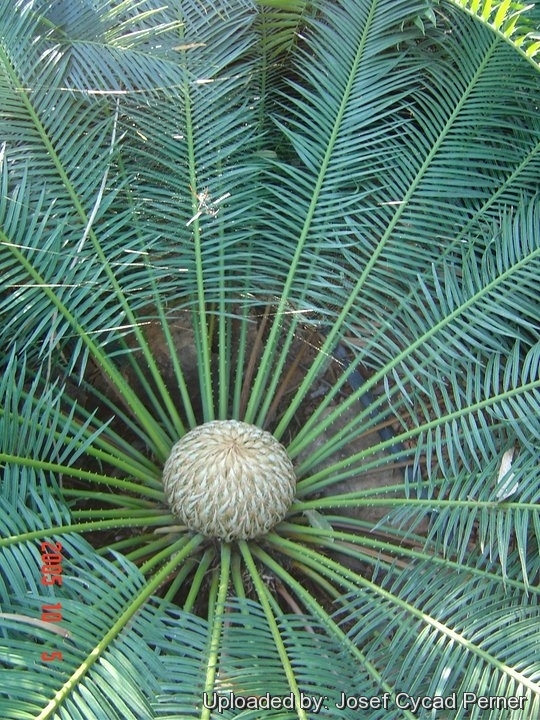 Cycas sphaerica Photo by: Josef Cycad Perner
Like other Cycas species, the female plants do not bear cones; instead they carry ovules and seeds on 20-25 cm long, loosely packed, persistently orange-tomentose megasporophylls. These are very hardy cycads, the colour of the leaves are a little bluish.

Origin and Habitat: Cycas sphaerica is a poorly known species found in the Eastern Ghats in eastern peninsular India. It ranges from the northern part of Srikakulam district of Andhra Pradesh northwards into Orissa at least as far as Bhubaneshwar. Also occurs in Tamil Nadu and Karnataka. Very little is known about the population size, trends and range of Cycas sphaerica.
Altitude range: The elevation values of 100 to 1,000 m are a rough estimate.
Habitat and Ecology: This species occurs in dry tropical forests and woodlands on hills and tops of ridges with heavy rainfall. It is also found in soil or humus in open forest, where it is less common. In Andhra Pradesh, it is found occasionally in dry deciduous forests on red sandy soil, among khondalite type rocks. Cycas sphaerica reproduces asexually and sexually. In asexual mode, bulbils arise as offshoots of the stem and produce new branches or new plants. In sexual mode, a small number of plants participate in the coning event during March-May. The plant sex ratio is strongly male-biased. The plant is typically anemophilous and effective for optimal seed set. The cones of both sexes show strong thermogenesis and odour production during the maturation process; these two processes attract Derelomus weevils which use male cones for feeding and breeding during which they get covered with pollen. These weevils in search of other male cones also visit female cones and effect pollination accidentally. The female cones only offer warmth to the weevils during night. The weevils diapause on male plants until the next coning season. Spotted deer (Axis axis), sloth bear (Melursus ursinus) and rainwater disperse seeds. Seeds are not dormant. Natural regeneration through sexual and asexual means is poor, which could be due to seed predation, inability of the germinating seeds and growing seedlings to compete well with the seasonal plants and grasses for the available nutrients in the soil and litter, and erratic rainfall or dry spells within the rainy season. Pieces of pith from the stem of C. sphaerica are used to make ‘sago' flour but it is not known to what extent this is a significant threat.

Description: Cycas sphaerica is a deciduous, dioecious, shrubby or small, erect, arborescent cycad species mimicking the look of a palm tree. It can grow up over 5 metres, with a girth up to 135 cm. It is similar to Cycas circinalis in most respects, differing in the broader megasporophyll apex with longer teeth. The megasporophylls are somewhat intermediate between those of Cycas circinalis and those of Cycas pectinata, which also shares the fibrous sarcotesta condition. The strobile or male cone has the same appearance of a long pine apple, the scales tapper from the middle into very long curved subulate points, but this does not appear to be consistent.
Note: Cycas sphaerica replaces Cycas spherica, as although both spellings are acceptable, the former was used by Roxburgh in the protologue in 1814, and formally described in by him 1832.
Stems: Arborescent, erect, up to 5 m tall, 9-27 cm diameter, base not strongly swollen, usually female plants posses branches. Bark is thick with alternate bands of scars on persistent leaf bases and cataphylls.
Leaves (fronds): Radiating from a central point at the top of a woody trunk-like stem, generally produced in the season before cone formation. They are pinnate, dark green, semiglossy, 95-160(-185) cm long, flat (not keeled) in section,(opposing leaflets inserted at 180° on rachis), with 55-130 leaflets, with newly emerging leaves light green and lacking tomentum became tomentum sheds very early as leaf expands. Petiole 27-50 cm long, glabrous, more or less spiny. Basal leaflets not gradually reducing to spines. Median leaflets simple, flat, weakly discolorous, (13-)18-21(-27) cm long, 7-12 mm wide, narrowed to 3-4 mm at base, 12-22 mm apart on rachis. Margins not undulate. Tip pointed, not rigid. Midrib raised above and below.
Cataphylls: The cataphylls (Modified leaf, much reduced and thickened, serving to protect the apical meristem in cycads produced in flushes preceding the emergence of cones or leaves.) are narrowly triangular soft, thinly sericeous or lacking tomentum, 50-70 mm long.
Pollen cones: Narrowly ovoid, orange, aprox. 45 cm long, and 10 cm across, Microsporophyll spirally arranged, numerous, lamina firm, 32-38 mm long; fertile zone 28-34 mm long, sterile apex 4 mm long, merging with apical spine. Spical spine prominent, raised upward, about 17 mm long.
Megasporophylls: Like other Cycas species, the female plants do not bear cones; instead they carry ovules and seeds on 20-25 cm long, loosely packed, persistently orange-tomentose megasporophylls. Ovules 3-8, glabrous. Lamina lanceolate, 28-43 mm long, 18-20 mm wide, shallowly pectinate or regularly dentate, with 21-25 pungent lateral spines 5-10 mm long; apical spine distinct from lateral spines, 17-29 mm long, 4-5 m wide at base. Usually cones are formed from May to August.
Seeds: Spherical or sub-spherical (hence the specific name), about 25 mm long and wide. Sarcotesta yellow, fibrous layer absent; sclerotesta smooth; spongy endotesta absent. 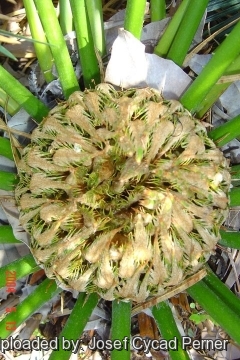 This is a receptive female waiting for pollen. Photo by: Josef Cycad Perner 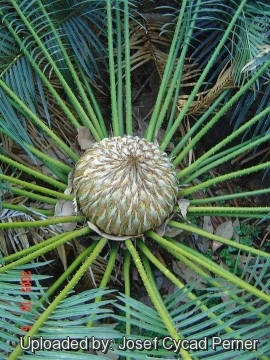 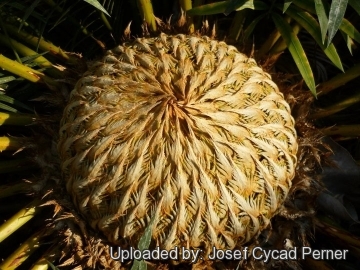 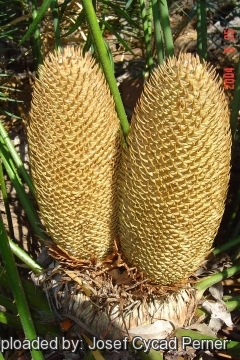 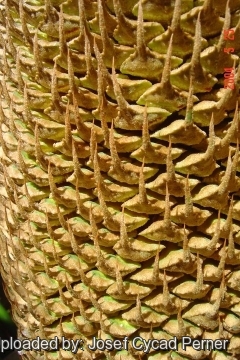 The scales of male cones tapper from the middle into ong curved subulate points, but this does not appear to be consistent. Photo by: Josef Cycad Perner 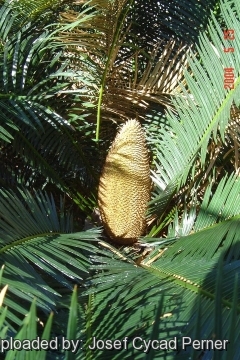 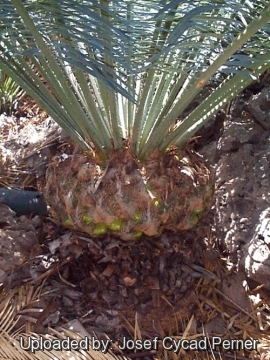 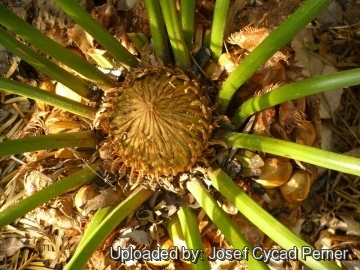 Cultivation and Propagation: Cycas sphaerica is suited to tropical regions which have a seasonally dry climate. It is easy to grow, tolerating dry periods.
Growth rate: Usually slow growing, however good conditions can speed it up considerably. Because of its growth habit, fertilize only when terminal bud begins to swell, indicating the start of the annual growth cycle.
Exposure: It prefers bright light exposure but colour bleaches when in full sun; best with some protection from afternoon heat.
Soil: Needs a well drained spot, with deep soil, but will still thrive in less than ideal conditions.
Maintenance: Minimal; removal of offsets if desired, removal of spent fronds.
Use: Landscape as cultivated perennial in warm, coastal areas; House-plant or interior-scape, as container plant in cool areas, as well very well suited to bonsai culture.
Use as food: The seeds of Cycas sphaerica in Odisha region of India are used extensively by the locals as food and commonly sold in the local markets. However the seed is poisonous. The potent poison in the seeds is removed by soaking them in water. Water from the first seed-soaking will kill birds, goats, sheep and hogs. Water from the following soakings is said to be harmless. After the final soaking, the seeds are dried and ground into flour. The flour is used to make tortillas, tamales, soup and porridge. However, consumption of the flour may result in a neurological disorder because of the neurotoxins content.
Propagation: Seed. As a slow growing plant, the seed can take from 6–18 months to germinate. After fertile seeds are collected, they usually need several months of storage before the inner embryo is ready to germinate. Therefore, it is best to clean the seeds of external fruit and set them aside before attempting to propagate the seeds.