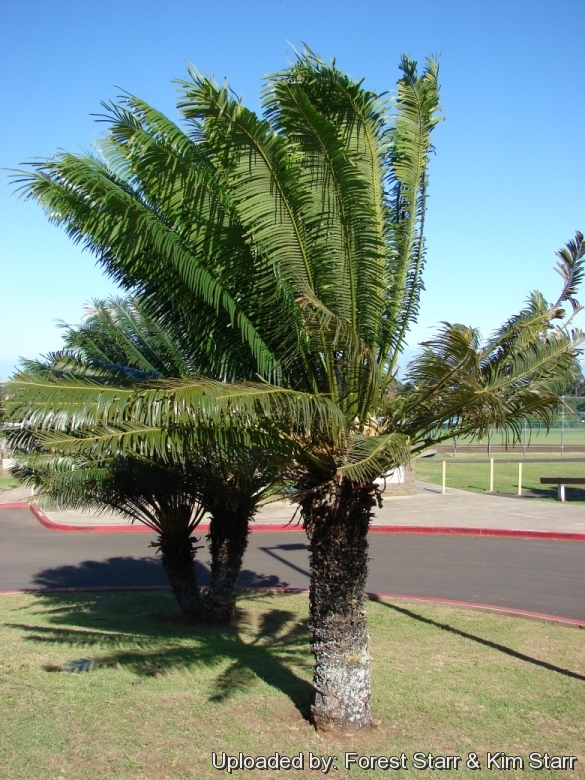 Origin and Habitat: Cycas circinalis, also known as the queen sago, is a species of cycad known in the wild only from southern India (Kerala, Karnataka, Tamil Nadu, and may also occur south of Maharashtra). The plant is widely cultivated in Hawaii and elsewhere in the tropics, both for its appearance in landscape and interiors, and for cut foliage.
Altitude range: From sea level to about 1000 in elevation.
Habitat and Ecology: Cycas circinalis appears to be an adaptable species found in different habitats comprising fairly dense, seasonally dry deciduous forest , shrub forest and savanna woodland in rocky hill outcrops, and in semi evergreen forests, at sea level too. Plants are also found in riparian zones in rocky areas (dried stream beds). Populations may also occur in taller moist deciduous forests. Many trees in this habitat lose their leaves in the dry season, and Cycas circinalis is also facultatively deciduous in extremely dry times. The surface of the Queen Sago Cycas circinalis trunk wood has much texture and grooves from the leaf bases, a feature that allows the trunk to be planted with orchids. Cycad pollination was long thought to be a chance event, effected only by the wind. This was especially troublesome for understanding the success of understory cycads in tropical forests, where there is little wind, and where pollen studies have shown that there is almost no cycad pollen in the air. More recent investigations have suggested that beetles, especially weevils, and small bees may make a more important contribution to the transfer of pollen. Studies have also shown that Cycas circinalis is pollinated by a species of weevil, which finds protection in the plant's cone and seed-bearing leaves. C. circinalis along with Cycas rumphii and Cycas thouarsis appear to be dispersed by flotation in seawater. The seeds of these three species float when viable, apparently because of a layer of spongy tissue inside the sarcotesta. Viable seeds of the other species sink. Seeds of C. circinalis, C. rumphii and C. thouarsii are also larger than those of other Cycas species and, unlike some other species of Cycas, are generally not brightly coloured. Land clearing is thought to have destroyed more than 50% of the original habitat of C. circinalis. Harvesting of cycad leaves for the urban floricultural market may also have an impact on this species. There is evidently medicinal properties in the leaves and pith of stem. Large and old specimens are ruthlessly hacked down for the extraction of pith. Seeds are harvested and used for food as a regular part of the diet. Natural populations have declined substantially. The decline is expected to continue as the drivers of decline still exist. Today only a handful of cycads still exist, and many are facing possible extinction in the wild, such as Microcycas in western Cuba. However, because of their large attractive leaves, many cycads have found a home in public and private gardens around the world.

Description: The Queen Sago palm, Cycas circinalis, is a stout palm-like plant with a trunk covered in thick and corky bark, which terminates in a crown of long, bright green, slightly glossy feathery leaves up to 270 centimetres long. The scientific name circinalis comes from the Latin word for coiled and refers to the way the leaf unfolds as it grows. The Sago Palm is not a palm, but a cycad. Cycads are known to be among the oldest group of seed plants on earth, surviving unchanged for millions of years. The flowers are dioecious (individual flowers are either male or female, but only one sex is to be found on any one plant so both male and female plants must be grown if seed is required). The plant is not self-fertile.
Distinguishing characteristics: Cycas circinalis has leaflets not more than 13 mm broad and long that easily tell this species apart from all other Indian species. The distinctive non-pepectinate megasporophyll with large, elongated, relatively broad megasporophyll lamina. The attenuate, reflexed microsporophyll apex are also characteristic of this species. This megasporophyll morphology occurs in many other species, and largely the cause of much of the confusion. The attenuate microsporophyll state is, however, restricted to a few species from the Indian subcontinent.
Stem: Up to 7 m tall always unbranched, whereas the King Sago, Cycas revoluta, creates many heads branching off from the main trunk and also from sprouts at ground level.
Roots: All cycads have special upwardly growing multi-branched (coralloid) roots where nitrogen is fixed in symbiosis with Nostoc and Anabena algae.
Leaves: Bright green, semiglossy, arranged in a rosette pattern 150-270 cm long flat (not keeled) in section . Petiole 34-70 cm long, partly or entirely spinescent. Petiole and pinnae pubescent. Pinnae (leaflets) 54 to 110 more or less opposed each other along the central stem(opposing leaflets inserted at 180° on rachis), median pinnae 23-36 cm long, 9-13 mm wide with 9-14 mm spacing between pinnae, margins flat, midrib raised above and distinct below. New emerging leaves have a glaucous sheen. Young leaves are densely pubescent but as they grow older they become glabrous.
Female cone: Like other Cycas species, the female plants do not bear cones; instead they carry ovules and seeds on large, feather-like megasporophylls which are 20-35 cm long, with between six and 14 ovules, and an orange tomentum. The lamina/blade or sterile part of the megasporophylls 27-40 mm long, 28-33 mm wide rhomboid tapering into a long spine that is 14-34 mm long and 3-6 mm wide, strongly dentate or spinous toothed along margin. The 13 to 28 lateral spines are each 3-4 mm long.
Remarks: Cycas produces the largest ovules in the plant kingdom (up to 6 cm long in Cycas circinalis and 7 cm in Cycas thourasii).
Male cone: Coming from the center of the top,light yellowish-brown to brown, egg-shaped to conical (24-)34-48 cm long, 12-15(-18) cm wide and produces abundant pollen. Each microsporophyll is 45-60 mm long and 21-24 mm wide with a terminal spine 20-39 mm long.
Seeds: The seeds of Cycas circinalis are quite small, subglobular to elongated, 30-39 mm long and 20-24 mm wide, they display a distinctive spongy, fibrous layer within the sarcotesta that allows them to float on water and are light yellow,reddish-yellow or brown at maturity.

Subspecies, varieties, forms and cultivars of plants belonging to the Cycas rumphii complex

The C. rumphii complex comprises a number of related taxa which have sometimes been considered conspecific. Differences between these taxa lie mainly in the shape and indentation of the lamina of the megasporophylls.

Notes: Surrounded by confusion since its description, Cycas circinalis was described as the single constituent species by Carl von Linne who established the genus Cycas in 1753. This description was based on a number of earlier works that in fact covered at least three distinct species which has led to total confusion. C. circinalis has subsequently appeared in the literature more frequently than any other Cycas combination, arguably without a single author wholly correctly applying the name. The other species covered by Linnaeus' description are now known as Cycas revoluta, separated by Thunberg in 1784, and Cycas rumphii, separated by Miguel in 1839. Cycas rumphii is part of a widespread species complex, all of which have been treated as part of C. circinalis at some time or other. Almost all plants in cultivation that have been known as C. circinalis in fact belong to the C. rumphii complex. The name C. circinalis has also been applied uncritically to local species in many parts of the world, without real knowledge of the true nature of typical C. circinalis. 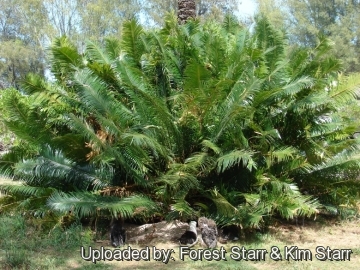 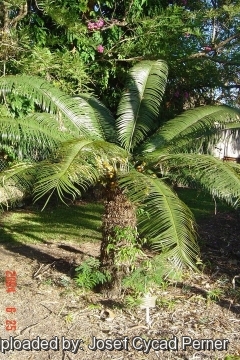 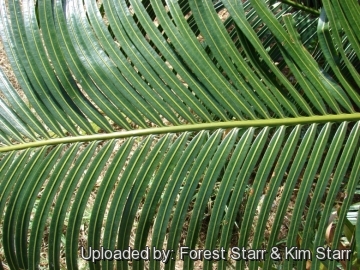 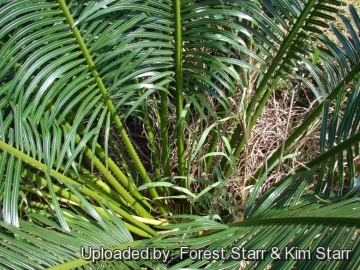 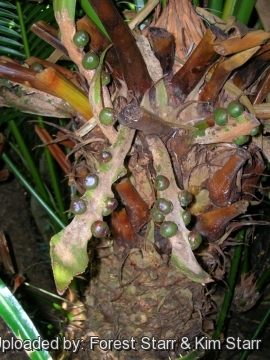 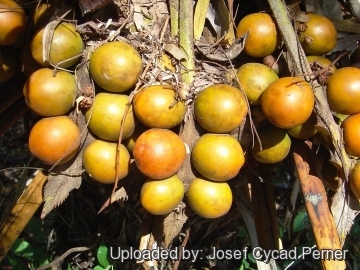 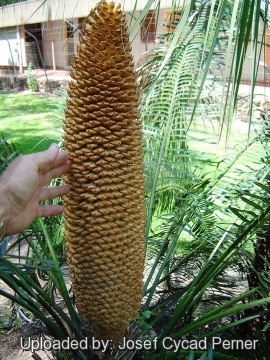 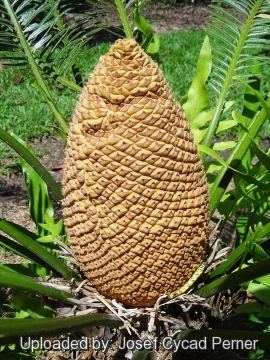 Cultivation and Propagation: Queen Sago is Cycas circinalis is suited to tropical regions which have a seasonally dry climate. It is easy to grow, tolerating dry periods. Queen Sago is often the focal point in a large yard.
Growth rate: Usually slow growing, however good conditions can speed it up considerably. Because of its growth habit, fertilize only when terminal bud begins to swell, indicating the start of the annual growth cycle.
Exposure: It prefers bright light exposure but colour bleaches when in full sun; best with some protection from afternoon heat.
Soil: Needs a well drained spot, with deep soil, but will still thrive in less than ideal conditions.
Maintenance: Minimal; removal of offsets if desired, removal of spent fronds.
Use: Landscape as cultivated perennial in warm, coastal areas; House-plant or interior-scape, as container plant in cool areas, as well very well suited to bonsai culture.
Use as food: The seed is poisonous. The potent poison in the seeds is removed by soaking them in water. Water from the first seed-soaking will kill birds, goats, sheep and hogs. Water from the following soakings is said to be harmless. After the final soaking, the seeds are dried and ground into flour. The flour is used to make tortillas, tamales, soup and porridge. However, consumption of the flour may result in a neurological disorder because of the neurotoxins content.
Propagation: Seed. As a slow growing plant, the seed can take from 6–18 months to germinate. After fertile seeds are collected, they usually need several months of storage before the inner embryo is ready to germinate. Therefore, it is best to clean the seeds of external fruit and set them aside before attempting to propagate the seeds.