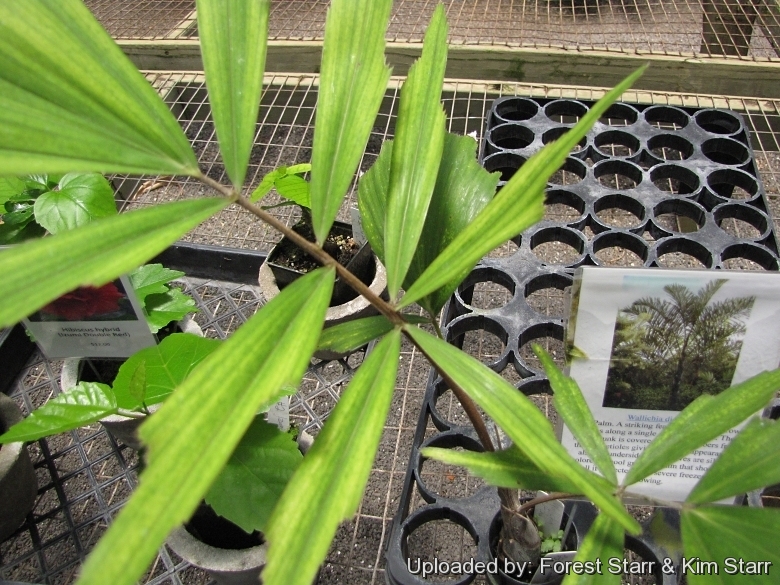 Origin and Habitat: Bangladesh, Bhutan, China (Yun-nan), India (Arunachal Pradesh, Assam, Meghalaya, Sikkim, West Bengal), Laos (Central), Myanmar (Bago, Chin, Kachin, Kayin, Rakhine), Thailand (North, South-west), and probably Nepal. Known from scattered localities through-out its range. In historical times it may also have occurred farther to the west, in Jharkhand in India.
Altitude range: to 1200 m elevation.
Habitat and ecology: Wallichia disticha grows in lowland and mountain foothill rain forest, especially in rocky areas on steep slopes, often in disturbed places. In Eastern India the Lepchas eat the pith, near the submit of the tree, and as they have to cut it down for that purpose, big ones are rare.

Description: Unusual in the genus because of its height Wallichia disticha is a fishtail-like palm from the the Himalayan region with a solitary trunk and large, stiff, feathery leaves arranged in opposite rows in the same plane, one leaf on top or opposite the other. The leaves are pinnate, though, not bipinnate like true fishtail palms. Leaflets vary considerably in shape, from linear to lanceolate.
Stems (trunks): One (or rarely more), naked, annulate to 9 m tall and 25 cm diameter, but usually less than 6 m tall. It has an ornamental dark color of criss-crossed fibres and old leaf bases on the trunk Wallichia disticha is the only species with a trunk of any size, the others being acaulescent bushes.
Crown: Nearly half the hight of the tree.
Leaves: Pinnate 2.4-4.5 m long, arching, arranged in two distinct ranks in 1 plane (distichous) or in a few planes; sheaths 40-60 cm long, fibrous, with coarse, overlapping, black fibers, those of the outer layer thicker than the inner ones; petioles 0.5-1.5 m long; rachis 1.8-3.5 m long; leaflets 45-73 per side of rachis 30-60 cm long and 5-7.5 cm wide, irregularly arranged in clusters of 3-8 pinnae and spreading in several planes, linear or lanceolate, narrow from near the apex to the base and have a large tooth on each side, about the middle, green above, slightly glaucous or silvery grey beneath on the lower surfaces.
Inflorescences: The green flowers are in unisexual clusters 90-180 cm long, male and female borne on the same stem, the pistillate terminal and the staminate lateral. Direction of anthesis amongst inflorescences is basipetal. It is monocarpic like fishtail palms, and once it flowers the individual stem can produce inflorescences for over two years, then it dies.
Staminate inflorescences: to 1.2 m long, pendulous with up to 1000 flowering branches (rachillae) and usually about twice as long as the clusters of female blooms. Staminate flowers to 10 mm long. On staminate rachillae, the direction of anthesis is acropetal.
Pistillate inflorescences: Less than 1 m long with up to 50 rachillae. Pistillate flowers 2 mm long.
Fruits: Ellipsoid, to 2.2 cm long and 1.5 cm diameter. Ripe fruit is reddish brown.

Cultivation and Propagation: Wallichia disticha is an easy to grow palm that likes sandy soil, but is adaptable to clay and loam both slightly alkaline and acidic. It is an easily recognized palm that has been much prized as an ornamental. Never very frequent in cultivation, its scarcity probably reflects the difficulty in obtaining seed. It is the only member of the genus to have its leaves arranged in two rows, i.e., distichously. It is this unusual leaf arrangement that makes it such a handsome and desirable palm.
Growth rate: It is a relatively short-lived palm taking only 10-20 years from seedling to flowering adult but can grow quite fast given the right conditions of warmth and humidity, together with a rich soil and an abundance of water. Specimens raised in dry and/or infertile soils tend to be smaller in stature with smaller leaves. Light also affects the plant's form while those grown in full sun are more compact.
Fertilization: Need a perfect fertilizer diet including all micro nutrients and trace elements or slow release fertilizer. Micronutrient deficiencies are occasional problems. If it doesn't get enough Mn and Fe, the leaves take on a rather unhealthy yellow colour. Micronutrient deficiencies only show up on soil with a high pH.
Water Requirements: Needs regular water, do not let dry out between waterings. however it does not want to sit in continually wet, mucky soil. The roots and lower trunk can rot if soil is kept too moist.
Light: Prefers full sun but will tolerate half day sun.
Hardiness: It is one of the hardiest feather palms, tolerating temperatures down to about -2°C (or even less for short periods) when mature, young plants are more cold sensitive; it is widely cultivated in subtropical and warm temperate regions.
Maintenance: Prune diseased, damaged or drying fronds, but do not prune if the frond still has some green colour. Palms recycle nutrients from dead or dying fronds and use them for healthier fronds. Palms only have a set number of new leaves that can sprout and grow per year and removing fronds will not increase that number. If you cut off more than what will grow annually, you could be left with a pretty bare and bald palm.
Roots: Not a problem.
Propagation: Seed, which sometimes is difficult to obtain, germinates erratically over 4 to 10 months in warm media and the seedlings are attractive.
Traditional uses: The pith from the stems is eaten in times of famine.
Ornamental: Wallichia disticha is cultivated as an ornamental tree, and planted in gardens and parks in tropical and sub-tropical climates either as a single specimen or in groups. Its very neat appearance and stature makes it perfect to accent residential landscapes. Culture in containers is possible although growth rates are slower. A bright patio will provide an excellent environment for young specimens which can eventually be planted in a sunny location.
Warning: Once they flower, they dies, and then they are difficult dead trees to remove. The root system of this species is sensitive and good sized specimen is extremely difficult to successfully dig and transplant to another location. Often moving or disturbing the roots in any way once over a certain size shocks the palm and it will seed prematurely and die.