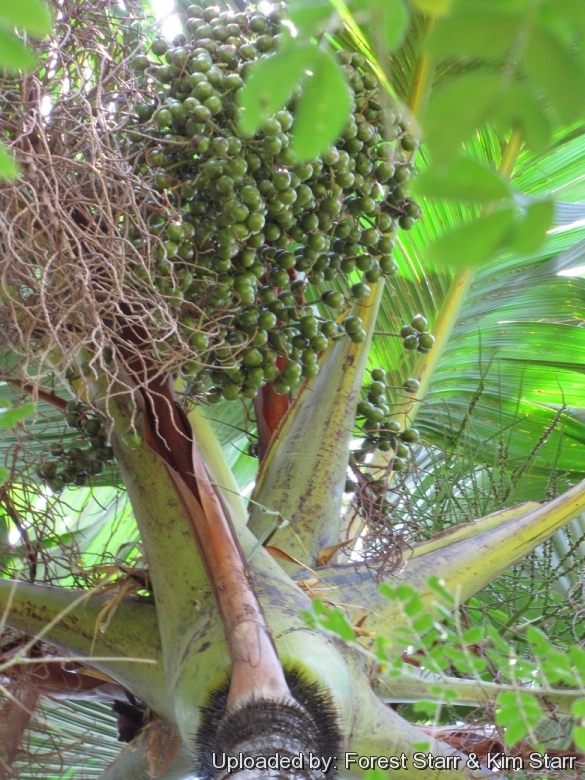 Origin and Habitat: Verschaffeltia splendida has a very restricted range as it occurs only on three islands: Mahé, Silhouette and Praslin in the Seychelles with a total area of 216 km2. This species is quite well distributed on the islands and it is possible that the total population size exceeds 10,000 mature individuals.
Altitude Range: It occurs from near sea level up to 850 m and is common above 300 m becoming scarcer at the highest altitudes. Rare below 300 m except in river valleys.
Habitat and Ecology: Verschaffeltia splendida is a canopy or under story palm tree found naturally only in the rainforests that cover the steep hillsides and ledges in moist forest together with Pandanus sechellarum. There, the wet, eroding granite ground has a thin layer of soil. Thick stilt roots grow out from the lower part of the trunk. They give the palm firmer anchorage on difficult terrain. The fruits are the preferred food of parrots and other birds that disperse the seeds. It appears to reproduce well in wet shady places in forests. It does not seem to be obviously threatened except by its restricted range. The invasion of alien plant species such as true cinnamon (Cinnamomum verum) and Malabar plum (Syzygium jambos) and habitat loss due to human settlements are potential threats to this species, but it does not seem to be strongly affected by these threats. The stems have been utilized in the past by local populations for building houses, practice which has caused a drastic reduction of the specimens present in the wild, now confined in the most impervious and of difficult access zones. In the lower altitudes, where the species is rare, there is a habitat loss due to human settlement. On Praslin, fires are an additional threat.

Description: Verschaffeltia splendida is a rare and very handsome palm with sturdy aerial stilt roots and broad leaves that crackle in the wind and appear shredded but they are not separate leaflets as in the coconut palm. Stilt roots provide extra stability in the loose soil. These adventitious roots grow downward and out-ward, forming a conelike base around the main trunk near ground level and the tree is supported by the stilt roots. The top of the stem and the petioles are spiny and have sharp, black spines protecting the first two leaves of the young plants. Verschaffeltia splendida is the only species in its genus, representing a unique evolutionary lineage of the Seychelles.
Stem (Trunk): Solitary, slender erect, up to 25 m tall, usually much shorter, and 20-30 cm in diameter, smooth but scarred where leaves have fallen; spiny when young; rings of dark spines pointing downwards at top of trunk on older trees; numerous aerial roots at the base.
Crownshaft: Absent.
Leaves: Obovate to oblong 90-180(-300) cm long with bi-lobed apex. Lamina undivided, lobed at margins, praemorse, irregularly tattering with age, and may appear pinnate due to the action of the wind, thus losing part of its charm, bright green veined and shaded with yellow. Leaf stalks (petioles) and the basal sheath, densely thorny,on young trees only.
Inflorescences: Interfoliar up to 2 m long, drooping beneath leaves of crown, branching to 2-3 orders, protandrous; prophyll inserted above base, persistent; peduncular bract similar; rachillae sinuous with spiral triads throughout.
Male flowers: Symmetrical, closed in bud; stamens 6, anthers rounded, medifixed, latrorse; pollen sulcate, exine tectate, reticulate; pistillode large, truncate.
Fruits: Spherical 2-3 cm long, dark brownish-green becoming red when mature, stigmatic remains basal; endocarp flanged and ridged, operculum rounded, basal.
Seed: Basally attached, hilum rounded, endosperm ruminate; embryo basal.
Seedlings: Eophyll (seedling leaves) bifid, tips divided. 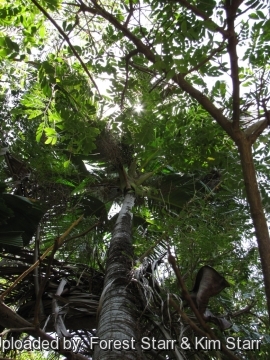 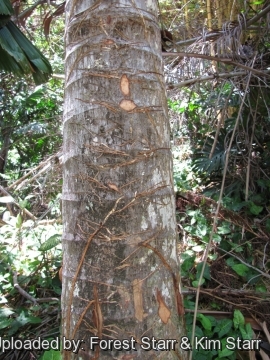 Cultivation and Propagation: This palm is an excellent relatively fast-growing palm adapt only to the wet tropical climate zones, but will grow in a sheltered position in the sub-tropics. Likes a position sheltered from the wind, (to keep the leaves intact), full sun or half-shade, and lot of water, but well drained soil. The leaves are undivided and full of spines under the leaves and around the trunk so do not take hold of them. It may also live well under average home conditions in bright light with moderate maintenance. This is the priemier stilt root palm to grow in the tropics.
Growth rate: It is a fast grower.
Soil: It grows well in moist, rich and sandy but perfectly draining soils and benefit from decomposing organic matter added to the soil, but is widely adaptable to many kinds of well drained soils.
Fertilization: It requires little of fertilizer. Use a perfect fertilizer diet including all micro nutrients and trace elements or slow release fertilizer applied during the growin season, or according to package directions, using a fertilizer specifically formulated for palms.
Watering: It prefers regular waterings and should be watered before the soil completely dries. Don't let sit in water, as it does not stand water stagnations. Indoor, potted Verschaffeltia splendida should not be over-watered. They may contract the fungus Phytophthora, if over-watered. One precaution you could use to make this palm look nice is misting the leaves during hottest summer days. This palm is sensitive to salts and minerals, so if your home uses a water softener, use water from a source that does not go through the softener first, such as an outside faucet. As most tropical plants, an occasional misting will make your Palm look and feel healthier.
Light: Partial shade when young, in full sun when adult. If home-grown, give some sun as with most tropical palms.
Fertilization: Need a perfect fertilizer diet including all micro nutrients and trace elements.
Aerosol salt tolerance: It is moderately salt tolerant, but does a lot better inland then it does on the coast.
Hardiness: It is one of the most sensitive palms to the low temperatures, as it gets damages already when at few grades over zero, even for short time. Cold Hardiness Zone: 11-12.
Wind hardiness: It cannot tolerate sweltering heat and windy conditions. If possible, it is to be placed in a location sheltered from the wind, which would cause damages to the great decorative leaves, and is particularly intolerant to the dry air. For a more cool tolerant alternative see Astrocaryum alatum.
Maintenance: Remove dried fronds.
Use: It is grown as an ornamental plant in gardens in tropical and subtropical regions, and elsewhere indoors.
Traditional uses: Traditional uses: The timber from this palm was historically used for the production of water gutters and the walls of huts.
Disease & Pests: It is quite resistant to pests but may require regular fertilization to prevent yellowing caused by potassium deficiencies; protect against scale insects and frost and spider mites.
Propagation: Fresh seeds are easy to germinate germinate within 2-6 months of being planted and the seedlings are fast growing and attractive. If not properly treated, the seed does not have long shelf life. They are best grown in a humid, warm subtropical or tropical climate but can also easily be kept indoors in containers.