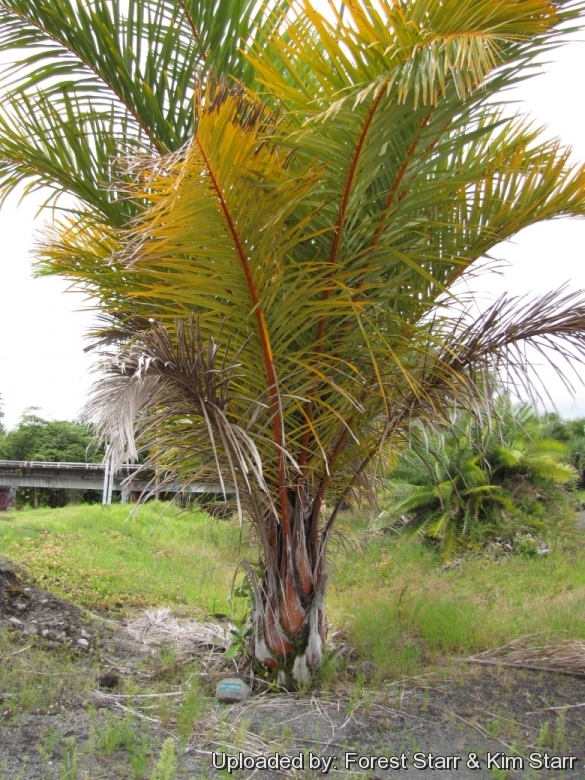 Origin and Habitat: Raphia farinifera is widely distributed throughout the southern part of tropical Africa. It is frequently cultivated, for instance in Nigeria, Madagascar, the Seychelles, Reunion, India, the United States and the Lesser Antilles, and it has often naturalised.
Habitat and ecology: In its natural distribution area, Raphia farinifera is widespread in gallery forest, freshwater swamp-forest and other moist locations, up to 2500 m altitude. In Madagascar it is a palm very closely associated with human activity, is common near villages planted in valley bottoms when forest is cleared for rice cultivation, at 50-1000 m altitude. It does not occur in primary forest, it seems highly likely that the palm was introduced into Madagascar when humans first colonised over 1500 years ago.

Description: Raphia farinifera is a monoecious, massive, clustering or solitary palm up to 25 m tall. It is remarkable for its compound pinnate leaves, that are among the longest in the plant kingdom (to 20 m long). Raphia farinifera is quite variable in its habit and fruit behaviour throughout East Africa and the Asian and Malesian tropics, in contrast in Madagascar the fruit shape is more or less uniform and the habit is always solitary. The plants are either monocarpic, flowering once and then dying after the seeds are mature, or hapaxanthic, that keep on living due to the development of new suckers. Inflorescences are produced more or less simultaneously in the axils of the most distal leaves. Raphia farinifera takes 20-50 years from seed to flowering and 5-6 years from flowering to ripe fruit, with all fruits maturing in the same year.
Trunk: Multiple (or solitary in Madagascar), usually sucker-producing, 2-7(-10) m tall and 30-100 cm in diameter, the lower part with pronounced leaf scars, some remains of rotten leaf sheaths, and adventitious roots, the upper part covered covered with the remains of the leafbases interspersed with long dark fibres.
Leaves: Pinnate, erect apically recurved, or slightly spreading, up to 20 m long. Petiole less up to 1.5 m long 12-20 cm in diameter, rounded in cross-section, unarmed Rachis unarmed, orange-brown or almost crimson, with 2 lateral grooves near the base;. Leaflets up to 150 on each side of the rachis, inserted in 2 planes, linear, stiff, up to 200 cm long and 8 cm waide, single-fold, lower surface white waxy, upper surface sparsely waxy, margins and main veins with yellowish spines up to 4 mm long, central ones large and less spiny, apical ones short and nearly completely spineless, main veins somewhat reddish.
Inflorescence: Axillary, pendulous, up to 4(6) m long x 35 cm wide, conspicuously branched to 2 orders.
Flowers: Uunisexual on monoecious plants. Male flowers several up to 12 mm x 2 mm clustered at apex of inflorescence branchlets, solitary each set at the axil of a bicarinate bract. Calyx of male flowers pedicelled. Female flowers at base up to 8 mm long, enclosed in 2 bracts.
Fruit: Ovoid, ellipsoid or pyriform, somewhat depressed, as big as a hen’s egg (4.5-11 cm long 3-6 cm in diameter), and mucronate at the apex with a beak up to 5 mm long, covered with hard, imbricate scales in 12-13(-15) rows, usually 1-seeded; scales very convex, reflexed, adpressedly ciliate up to 20 mm long and 26 mm wide, glossy, bright orange-brown or chestnut-brown. Mesocarp golden yellow.
Seed: Ovoid to ellipsoid, 3-6 cm x 3-4.5 cm; mesocarp oily: endosperm sparsely to densely ruminate. 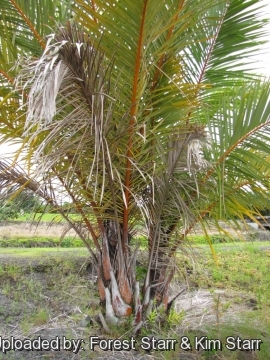 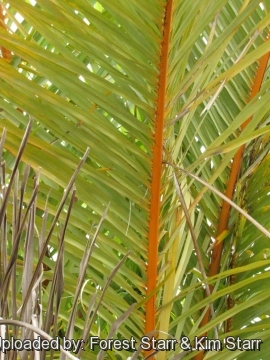 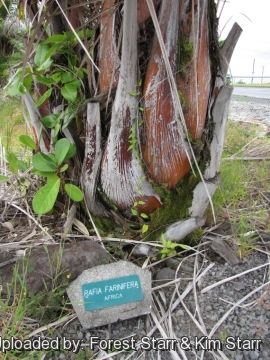 Cultivation and Propagation: Raphia farinifera is an excellent palm adapt to tropical and subtropical climates, that does well in cultivation. It is little slow to take off but once established will grow quite fast. Raphia farinifera is a great palm in a boggy spot where the land has been raped, and drainage is not so good.
Remarks: Few people are aware of just how large this palm can get, and one often sees it planted in places where its going to cause real problems later on.
Soil requirements: It prefers well-drained fertile, soils except those that are constantly soggy. However it is widely adaptable and can even thrives in poor soils, but do better when grown in nutrient-rich soils with regular watering.
Watering: This palms like to be waterlogged, since their habitat is along riverbeds and in cultivation they appreciates very abundant waterings. During the summer or warmer months, water frequently (even every 2 days) to keep the soil from drying out. They need also elevated summer humidity, a dry atmosphere can be detrimental.
Light: It adapts well to full sun or half sun. If home-grown, give some sun as with most tropical palms.
Fertilization: Need a perfect fertilizer diet including all micro nutrients and trace elements. It is subject to potassium deficiency.
Aerosol salt tolerance: It is moderately salt tolerant, but does a lot better inland then it does on the coast.
Hardiness: Minimum Tolerated Temperature is about 1° C. However it can be difficult to get it to look its best without a great amount of heat and sun.and so it is only really suited to the tropics in frost-free regions (USDA Zones 10-12)
Wind hardiness: It can tolerate sweltering heat and moderately windy conditions.
Maintenance: Prune diseased, damaged or drying fronds, but do not prune if the frond still has some green colour. Palms recycle nutrients from dead or dying fronds and use them for healthier fronds. Palms only have a set number of new leaves that can sprout and grow per year and removing fronds will not increase that number. If you cut off more than what will grow annually, you could be left with a pretty bare and bald Palm.
Ornamental use: It is grown as an ornamental plant in gardens in tropical and subtropical regions, and elsewhere indoors. For its clustering growth habit, primarily is used as a specimen plant in garden and parks.
Traditional uses: In the areas of origin, its leaves are employed for the production of raffia, a fibre largely used, especially in floriculture and horticulture, to make very tough ties, as well as a number of woven articles (mats, baskets, hats, etc.). Its tough and yet very flexible and resilient leaf petioles are employed, instead of bamboo, to build houses, fences and ladders, and as poles. In Madagascar the midveins of the leaflets are used for making fishing nets and a range of articles for domestic use. Finally, its still undivided leaf segments contain a waxy substance employed by the natives to produce floor and shoe polish..
Food uses: Sago, a kind of flour, is extracted from the stem pith which, before blooming, is extremely rich in starch.
Disease & Pests: It is quite resistant to pests but may require regular fertilization to prevent yellowing caused by potassium deficiencies; protect against frost.
Propagation: Propagation and planting Raphia farinifera is propagated by seed. Germination is slow, unless the outer layers of the seed are removed and the root is exposed. In Madagascar seeds have been reported to germinate after 4-5 months, and to be ready for planting out in the field at 1 year after sowing. Seedlings may also be collected from the wild and raised in a nursery. A normal spacing is 12 m x 12 m. Propagation by tissue culture techniques may offer potential for Raphia.