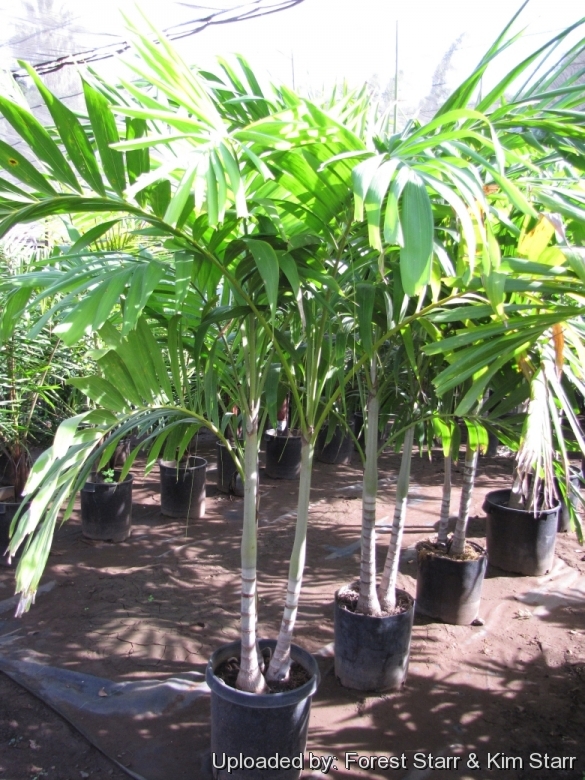 Description: Ptychosperma elegans is one of the few Ptychosperma species with solitary trunk, (most sucker). It flowers and fruits when still small.
Trunk: Slender 10-12 cm in diameter and up to 15 metres of height (but often less than 10 m tall in cultivation), bulging at the base, green in the younger part and greyish or almost white in the older one with dark leaf base scars that encircle the trunk and lighten in colour with age.
Crown: It carries a small head of semi-erect whorl of fronds.
Crownshaft: The foliar base wraps entirely the top of the trunk for a length of 40-50 cm forming an olive-green crownshaft. The crownshaft has a bulging base and smooth waxy surface.
Leaves: Up to to 3(-3,3) metres long, pinnately compound, reduplicate, arching leaves with 30-60 wide premorse leaflets (indented at the ends in the typical Ptychosperma fashion), narrowly oblong, widest toward the middle, opposite from one another on the rachis, in a single plane, displaying a "V" shaped appearance, long even 1 metre in the median part, glossy intense green on the topside and grey-green on the underside. Petiole 30 cm long.
Inflorescence: 60-100 cm long pendulous under the leaves just below the crownshaft, green-yellow heavily branched to two or three orders. Flowers three-petaled, unisexual borne on the same inflorescence, cream-green, in triad (a feminine flower between two masculine ones). Male flowers1.5-2 mm long, whitish to light green with 12-22 per flower (the female parts are developed but the ovules are absent in the male flowers). Female flowers whithis-green.
Fruit: Globose to ellipsoid, 9-15 mm of length, 8-10 mm diameter, bright red when mature and have remnants of the stigma at the apex.
Seed: 10-11 mm long, 5-angled. Endosperm deeply ruminate.
Seedlings: First pair of leaves compound with two sessile, longitudinally veined leaflets up to 7 cm long.
Remarks: Ptychosperma elegans may be confused with Ptychosperma macarthurii, but it is a smaller statured, clustering palm with drooping rather than ascending leaflets. 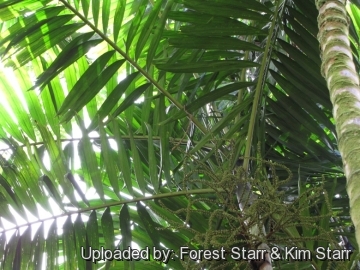 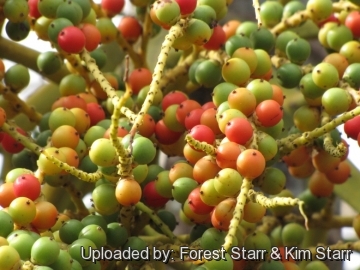 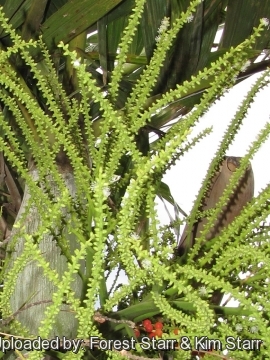 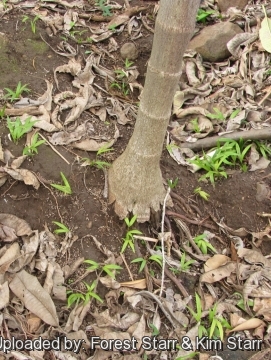 Cultivation and Propagation: This palm is an excellent pretty fast growing garden plant adapt to different tropical climates. It is also one of the most elegant indoor palms.
Soil requirements: It prefers well-drained fertile, organic, nutrient-laden soils except those that are constantly soggy. However it is widely adaptable including those that are neutral, acidic, clayey and slightly alkaline.
Watering: It prefers regular waterings and should be watered before the soil completely dries. Don't let sit in water. Indoor, potted Ptychosperma should not be over-watered. They may contract the fungus Phytophthora, if over-watered.
Light: Outside they grow best in half sun and tolerating direct sun only after about five years old. Young specimens need protection from direct sunlight and grow best in shady to partly shady locations. If home-grown, they look their best in bright diffuse light.
Fertilization: Need a perfect low-release fertilizer (e.g., 18-18-18) diet including all micro nutrients and trace elements. It is subject to magnesium and potassium deficiency
Hardiness: They grow well in tropical and subtropical climates, however it is one of the only 'hardy' Ptychosperma species that can handle temps down to -6° C without any problems; For safe cultivation normal temperatures should not go below 5°. (USDA Zones 9b – 11)
Wind tolerance: Keep out of high, drying cold winds.
Maintenance: Remove dried fronds.
Garden uses: It is grown in open air, in the sub tropical and warm-temperate zones, for the decoration of parks and gardens, in a partly shaded location when young, and regularly watered. Because of its reduced size and its elegant look, the Ptychosperma elegans proves to be particularly suitable for its utilization in patios and in great open inner courts.
It has a fairly good employment, in pot, for indoor decoration.
Disease & Pests: It is quite resistant to pests but may require regular fertilization to prevent yellowing caused by potassium deficiencies; protect against spider mites, scale insects. Protect from frost.
Propagation: By seeds that germinate well in 2-3 months and are readily available.