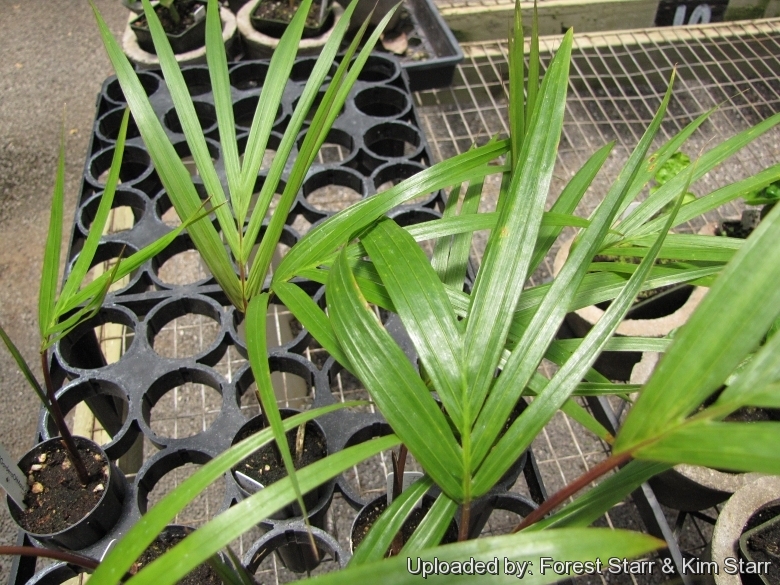 Origin and Habitat: Hyophorbe indica is endemic to Réunion in the Mascarene Islands, east of Madagascar in the Indian Ocean. There is a series of small populations totalling more than 100 but probably fewer than 500 only. The palm comes in 2 colours: The green one grows in the east coast of the Réunion, while the red one is endemic to Tampon region south-west/central).
Altitude range: between 175 and 600 metres above sea level.
Habitat: Hyophorbe indica is a palm tree of moist primary forest that grows in almost inaccessible places or on land unfit for agriculture. It is threatened by the expansion of agriculture and human habitation.

Description: Hyophorbe indica is a very attractive solitary, medium size, feather palm with a slender trunk, to about 10 m tall, and monoecious (male and female flowers on the same plant). The inflorescence bud is hornlike. It is particularly noticeable for its elegant strongly arched fronds and has 2 forms, one - the standard form - with striking deep green crownshaft, while the other has a very distinctive reddish tinge. There are also noticable differences between the seeds of these 2 forms. Hyophorbe indica is locally known as 'poison palm', because of its bitter bitter cabbage taste.
Trunk: Slender, relatively thin, grey and ringed up to 13 cm in diameter, with only a slight bulge, if any, at the base.
Crownshaft: 50-60 cm long, swollen, the more common form has an attractive deep green crownshaft, while the southern variety has a distinctive dark bronze-green to rusty-red crownshaft and red petioles. In general it can be said that the colour of the red form weakens with age and the appearance of both forms assimilates more and more.
Crown: Hyophorbe indica forms the largest crown of the Hyoforbe genus and bears 5 to 6 self cleaning fronds at a time.
Leaves (fronds): Broad, pinnate with 90-100 V-shaped leaflets, brilliant green on the top and a more subdued green-grey on the underside. Petiole 15-30 cm long (relatively long for a Hyophorbe) .
Flowers: Flowers light yellow arranged in a partial inflorescence called an acervulus (a distinctive flower cluster found only in the chamaedoreoid group of palms), the unit consists of a row of sessile flowers, the upper 3-4, staminate and the basal flower, pistillate. It blooms many times throughout the year.
Seeds: The seeds of the red form appear darker.
Note: Hyophorbe indica is an xceedingly rare relative of the well known Bottle palm (Hyophorbe lagenicaulis) and Spindle palm (Hyophorbe verschaffeltii), this species has a much more slender appearance and does not exhibit any curiously bottling trunk, it is also very fast growing. It appears to have been confused in the past with Chrysalidocarpus lutescens.

Cultivation and Propagation: Hyophorbe indica is an excellent easy to grow palm adapt to tropical and warm subtropical climates, but is usually not cultivated. Its elegant shape together with its small canopy and small stature make it suitable for a smaller landscape. People who live in colder climates can still enjoy the palms as potted plants. The green form is rare and cold-sensitive than the red form and is little cultivated in contrast to the red form.
Growth rate: Hyophorbe indica is a relatively slow-growing palm, but grows faster than the other Hyophorbe and can eventually be fast growing given the best conditions.
Soil requirements: It has a fibrous root system and benefits from deep organic, soils that are fertile, but thrives on wide range of tropical soils, like coastal marine alluvial clays, soils of volcanic origin, sands as long as they are well drained.
Watering: It prefers adequate moisture to look its best. This palm a will tolerate occasional dryness if not prolonged. Don't let sit in water. Indoor, potted palms should not be over-watered. They may contract the fungus Phytophthora, if over-watered.
Light: It prefers shade when young, but can take full sun as it gets older, even full sun in coastal conditions. If home-grown, give some sun as with most tropical palms.
Fertilization: It needs a perfect fertilizer diet including all micro nutrients and trace elements three times a year if not grown in rich soil.
Aerosol salt tolerance: It is very salt tolerant, but does a lot better inland then it does on the coast.
Hardiness: This palm is tender and is suited for tropical or subtropical climates, but may survive very light frosts to about -3° C (as long as not prolonged) even if it end up getting nearly defoliated each winter. (USDA Zones 9b-11). Seedling growth arrests below 15°C.
Wind hardiness: It is tolerant and even survives to strong hurricane wind with minimal damages, but will grow better with slow wind.
Garden uses: It is an excellent landscaping palm when set out on the lawn as a specimen, especially for small gardens where other palms will grow out of scale. Plant this palms in containers and feature it in a prominent spot on the patio.
Propagation: The fresh seeds take 4-6 months to germinate. If not properly treated, the seed does not have long shelf life.