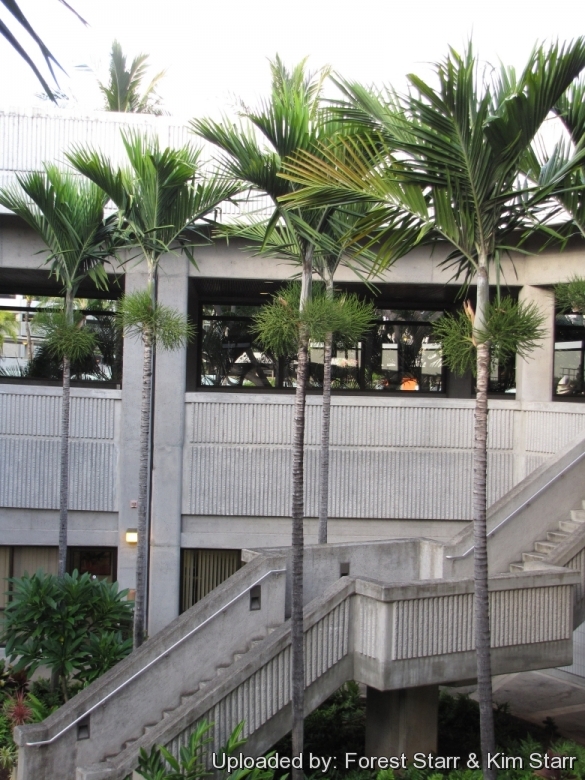 Origin and Habitat: It occurs fairly widely on most of the major Fijian islands, New Hebrides and Tonga (Pacific Ocean).
Habitat: It is an emergent palm of the Fijian rainforests. Occasional in secondary forest and in garden areas. Planted more in the past.

Description: Veitchia joannis is a nice looking, very tall, solitary, feather palm. It is one of the taller growing veitchias commonly cultivated and can be distinguished from the other similar veitchias by the habit of the leaves which droop much below the horizontal as they age.
Trunk: Thick to about 12-35 m tall and 25-40 cm in diameter, bulging at the base, clean, grey, markedly ringed with prominent leaf scar rings.
Crown: Canopy of 8-10 leaves with lower leaves hanging below horizontal level.
Crownshaft: 60-120 cm long, slightly swollen at the base, whitish-green speckled with olive green, grey, black and with brown scales.
Leaves: Pinnate, reduplicate, to 3 m long, with a gracefully arching rachis. Leflets about 70-80 pairs, 25-60 cm long, lanceolate, regularly arranged in a single plane, slightly pendant forming a 45° angle, with thick marginal ribs and prominent midribs, dark green above and below, with serrated tips.
Flowers: Inflorescence is arching, up to 79 cm long and branched to three or four orders. Greenish to white male and female flowers are borne on the same inflorescence (monoicous) .
Fruit: Ovoid, beaked, cartridge shaped, bright red 4-6 cm long.
Remarks: This Veitchia might hybridize with other species. Similarities of palms in this genus make determination of species difficult. 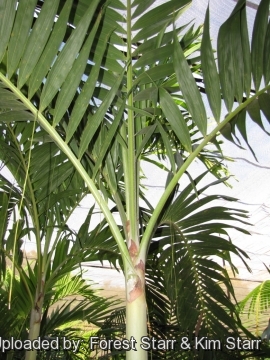 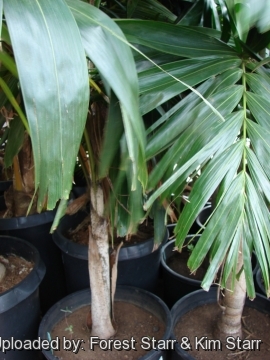 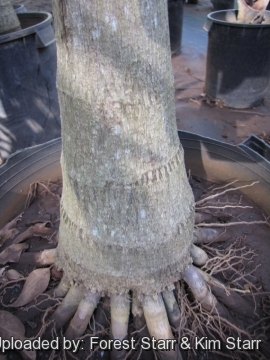 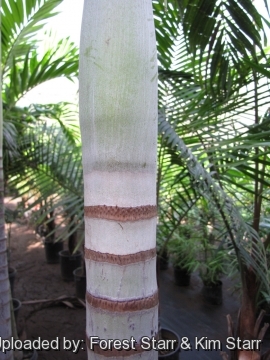 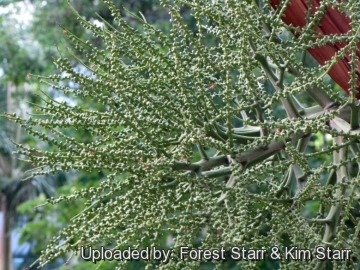 Cultivation and Propagation: This is a very popular ornamental palm throughout the tropics or warm sub-tropics. It is a bit temperamental when it is young, but is easier as it matures. The red fruits, borne in quantity over a fairly long period, are also highly ornamental. When young and placed in pots for indoor is of rare beauty.
Growth Rate: Moderate to fast growing if given adequate fertilizer.
Soil: It grows well in moist, rich and sandy but well drained soils and benefit from decomposing organic matter added to the soil, but is widely adaptable to many kinds of well drained soils.
Fertilization: It requires little of fertilizer. Use a perfect fertilizer diet including all micro nutrients and trace elements or slow release fertilizer applied during the growing season, or according to package directions, using a fertilizer specifically formulated for palms.
Water Requirements: It is tolerant of short periods of drought once established, though it prefers evenly moist but not consistently wet medium. When supplied with adequate moisture and fertilizer it is also fairly fast growing. It dislikes soggy soils.
Light: Prefers shade as a youngster, but grows into full sun.
Salt tolerance: It is moderately tolerant of seaside spray and if grown near the sea, best if given some protection (behind a dune, building, etc.), but does a lot better inland then it does on the coast.. It does not take well to being inundated by salt or brackish water.
Wind resistance: Moderate. The leaves can burn if exposed to drying winds.
Hardiness: It really is a palm for the tropics adapted to USDA zones 10B-11. This palm is cold sensitive and need constant warmth. It don't tolerate any freeze and the leaves can burn if exposed to cold.
Roots: Usually not a problem
Maintenance: The fronds are persistent. For the healthiest and most attractive plant, keep the palm pruned. As the old fronds die, these should be trimmed off and the leaf bases allowed to dry out, but do not prune if the frond still has some green colour and avoid removing fronds above an imaginary 180 degree horizon. Palms recycle nutrients from dead or dying fronds and use them for healthier fronds. These days it is popular to remove all but a few of the suckers and to prune the leaves to form a cluster of clear trunked "mini" palms.
Pest and diseases: Aphids; scales.
Human hazards: None.
Uses: It is used massively in gardening and landscaping as specimen tree planted alone or in groups. It is used along roadways, in parking lots, yards, patios. It is also excellent in containers and urns.
Food uses: Immature seeds are eaten as a snack . New leaves and buds can be eaten raw like salad.
Propagation: By seed. Can be grown from de-pulped seed.