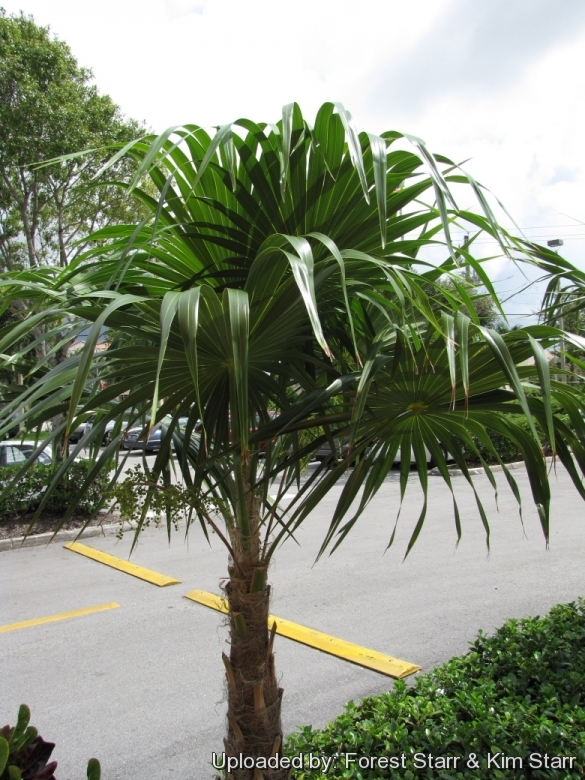 Description: Thrinax radiata is a medium sized, solitary, very slow-growing tree or shrub-like fan palm very attractive when young, becoming much taller than broad when mature.
Trunk: 3-6 m tall (occasionally up to 9 m tall), 9-15 cm in diameter, usually solitary, slender, straight, erect, smooth. Typically the base of the trunk has lots of dead roots that protrude above the ground. The entire trunk of young specimens is matted with fibres held between old leaf bases, while in older specimens the mid and lower trunk is rough and grey.
Crown (canopy): Regular, with 12-20 leaves, more dense and and globular in full sun and open and airy under shade.
Crownshaft: None.
Leaves: Palmate, induplicate, nearly circular (fan-shaped), about 60-90(-150) cm in diameter, deeply split about halfway into 50-60 slightly folded segments up to 60 cm long and 5 cm wide, with drooping and split leaf tips, glossy yellowish-green to dark green on top and light green on the underside. Hastula pointed, petiole unarmed 60-90 cm long.
Flower: The inflorescence is 90 cm long or more and arches downward, sometimes
extending beyond the frond. The bisexual flowers are white and showy.
Flowering Season: All year; peak in spring. Palms as short as 180 cm will begin flowering.
Fruit: Round white drupe 5-8 mm in diameter. All year, but are more abundant in the autumn.

Notes: Initially Thrinax palms look a lot like to the closely related Cocothrinax genus but the trunk looks very different as this genus has split leaf bases, while Coccothrinax palms do not. The white drupes also distinguishes it from Coccothrinax. The latter group of palms have yellow or black drupes. Thrinax palm also differs from both the thatch palm (Leucothrinax morrisii) and the silver palm (Coccothrinax argentata) by lacking the silvery white leaf undersurfaces. 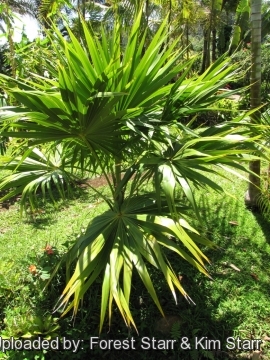 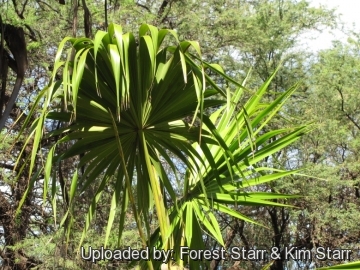 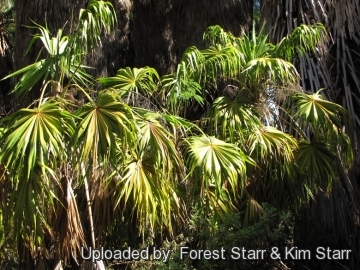 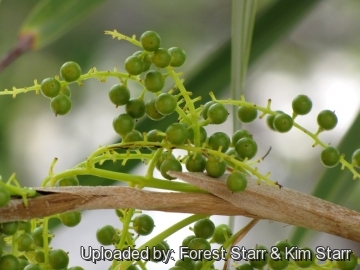 Cultivation and Propagation: It is cultivated in tropical, subtropical regions and planted in gardens and parks. If you needs a small low maintenance, but graceful looking palm, it doesn't get any better than Thrinax radiata.
Growth Rate: Slow. Growth averages no more than 18 cm a year.
Soil: It grows well in the high pH of calcareous and sandy material (This material is frequently used for roadway and residential construction) and benefit from decomposing organic matter added to the soil, but is adaptable to many kinds of well drained soils.
Fertilization: It requires little of fertilizer. Use a perfect fertilizer diet including all micro nutrients and trace elements or slow release fertilizer applied during the growing season, or according to package directions, using a fertilizer specifically formulated for palms.
Water Requirements: It is tolerant of short periods of drought once established, though it prefers evenly moist but not consistently wet medium. When supplied with adequate moisture and fertilizer it is also fairly fast growing. It dislikes soggy soils.
Light: It prefers bright sunny locations, but it also does well in part shade with some direct sunlight. It will survive in rather heavy shade but "stretches" to lose its compact shape.
Salt tolerance: It is somewhat tolerant of seaside spray and may be grown near the sea, best if given some protection (behind a dune, building, etc.). It does not take well to being inundated by salt or brackish water.
Wind resistance: High.
Hardiness: It is a relatively cold tolerant species and is able to survive temperatures as low as -3° C ( U.S.D.A. Zone: 10A-12B).
Roots: Usually not a problem
Maintenance: The fronds are persistent. For the healthiest and most attractive plant, keep the palm pruned. As the old fronds die, these should be trimmed off and the leaf bases allowed to dry out, but do not prune if the frond still has some green colour and avoid removing fronds above an imaginary 180 degree horizon. Palms recycle nutrients from dead or dying fronds and use them for healthier fronds. These days it is popular to remove all but a few of the suckers and to prune the leaves to form a cluster of clear trunked "mini" palms.
Pest and diseases: Aphids; scales.
Human hazards: None
Uses: It is used massively in gardening and landscaping in many tropical and subtropical part of the world though in sheltered areas it will survive short periods below freezing point. It is frequently used along roadways, in parking lots, yards, patios, seaside and wherever there is limited space. It is also excellent in containers and urns. And thanks to its drought resistance and durability to heat it can thrive in harsh urban conditions.
Traditional uses: The stems are used as stakes and leaves in the manufacture of hats and roofing.
Propagation: By seed. Can be grown from de-pulped seed. Place container in light shade or full sun.