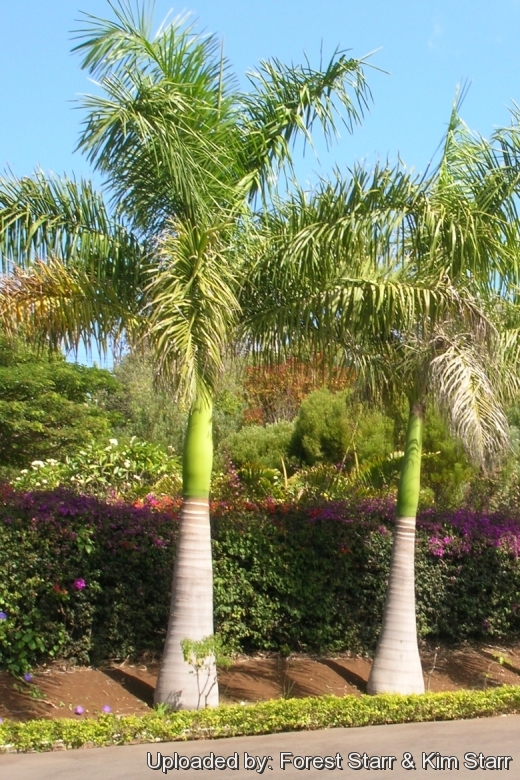 Origin and Habitat: Florida (USA), Mexico, Belize, Honduras, Bahamas, Cayman Islands, Cuba; Widely planted throughout the tropics and subtropics as an ornamental and often naturalized.
Ecology: The fruit is eaten by birds and bats which disperse the seeds. Its flowers are visited by birds and bats, and it serves as a roosting site and food source for a variety of animals.
Habitat: Forests or open savannah often in wet places. In Florida (Roystonea elata) is native to the cypress (Taxodium distichum) swamps of south Florida.

Description: It is a very stately, tall, single-trunk palm with a large crown of feathery leaves usually with a bulge in the trunk giving the shape of a bottle or barrel. The plant is unequalled among the palms in its beauty and grace.
Trunk: 7-30 m tall (with heights up to 34,5 m reported), diameter 35-47 cm swelling to 60-70 cm, grey-white resembling concrete in colour and texture, smooth with circular leaf scars, swollen at the base. It constricts about halfway up and then bulges again just below the crownshaft.
Roots: Fibrous typical of monocots.
Crown: With about 15-20 leaves lower fronds hanging below the horizontal.
Crownshaft: Well-defined glossy 1,5 m long, partially obscured by lower fronds;
Leaves (fronds): 3-4 m long, odd-pinnately compound; segments (leaflets) lanceolate, in brief clusters of 2-4, inserted on rachis in several ranks at divergent angles, giving leaf an almost plumose appearance. Margin entire.
Flowers: Inflorescences to 1 m arching gracefully outward, not wavy; rachillae 11-31 cm, stiff. Flowers unisexual both male and female on the same inflorescence; male flowers white with pinkish anthers.
Fruits: Broadly ellipsoid, dorsiventrally compressed obovoid, 9-15 mm, diameter 7-10 mm ripening from green through red to purplish black at maturity. 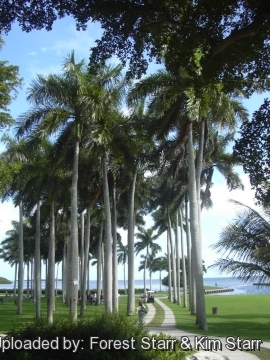 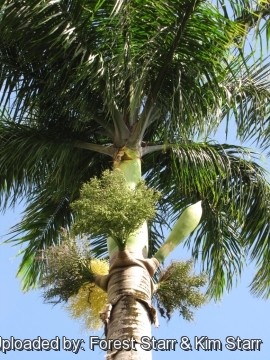 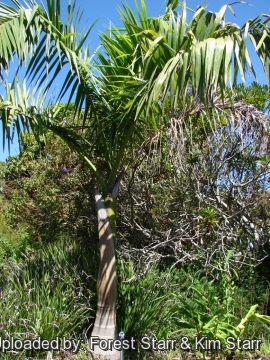 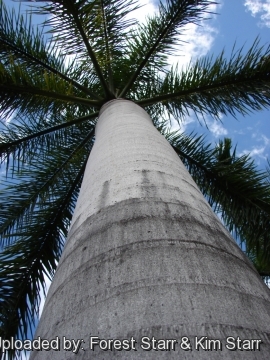 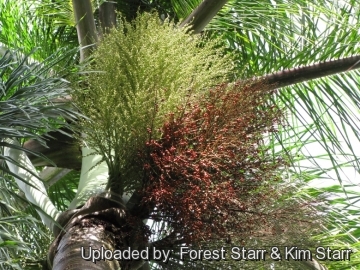 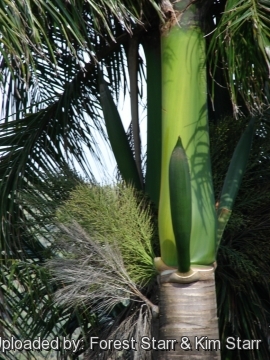 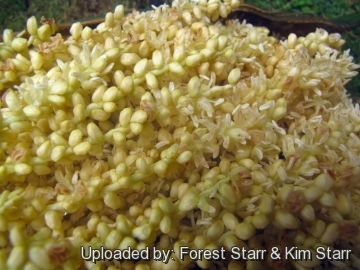 Cultivation and Propagation: It is relatively easy to grow and very adaptable to soil type, with a little care (water and fertilizer) this palm will reward with fast growth that is rare for a palm. It is a palm with non-invasive roots.
Fertilization: Need a perfect fertilizer diet including all micro nutrients and trace elements or slow release fertilizer.
Light: Prefers bright sunny conditions.
Hardiness: Some cold tolerance. This palm has tolerated temperatures down to –3ºC and even a little snow. However it can be difficult to get it to look its best without a great amount of heat and sun and so it is only really suited to the tropics in frost-free regions (USDA Zones 10-11)
Water:This palms like water and look their best when given adequate amounts. During the summer or warmer months, water frequently to keep the soil from drying out. But can tolerate occasional flooding or drought.
Remarks: Few people are aware of just how large this palm can get, and one often sees it planted in places where its going to cause real problems later on.
Aerosol salt tolerance: Being tolerant of salt sprays it will grow near salt water and on the beach if set back from the first line of dunes.
Maintenance: Prune diseased, damaged or drying fronds, but do not prune if the frond still has some green colour. Palms recycle nutrients from dead or dying fronds and use them for healthier fronds.
Garden uses: Its very neat appearance and stature makes it perfect near highways and used to accent residential landscapes. It is also an indoor plant, but really would prefer more light and fresh air. A shade screen patio will provide an excellent environment for young specimens which can eventually be planted in a sunny location.
Traditional uses: It is a source of thatch, construction timber, and as a medicinal plant. The fruit is eaten by livestock.
Remarks: It is an invasive species that reproduces profusely by seeds that germinate everywhere around the mother plants and a demanding effort is needed to control the seedlings. For these reasons, the continuing use of this species as an ornamental should be discouraged.
Propagation: Fresh seeds germinate quickly within a month of being planted and the seedlings are attractive.