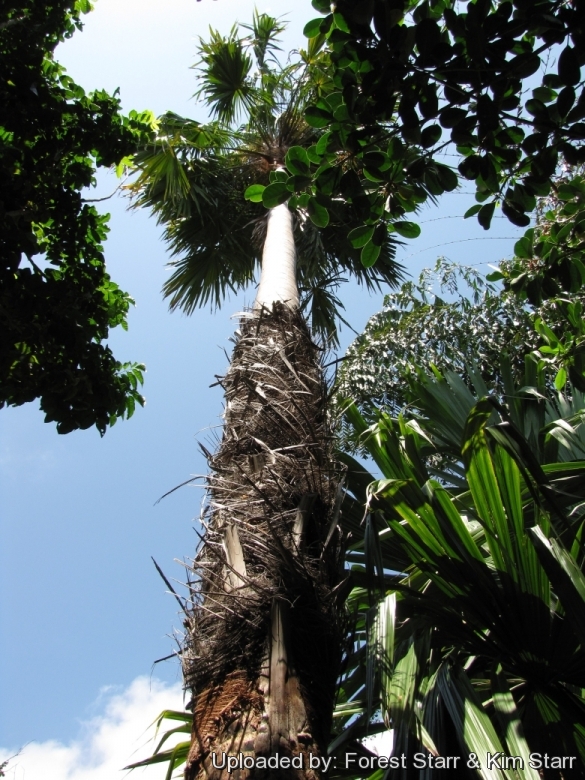 Origin and Habitat: It is native to South-east Asia (Malaysia, Indonesia, Java, Moluccas, Philippines, Sulawesi, and Lesser Sunda Islands), but is now cultivated all over the world in tropical and subtropical countries as an ornamental plant.
Habitat: Mountainous pluvial forests at low and medium altitudes.

Description: Saribus rotundifolius (syn: Livistona rotundifolia) is a very attractive palm, especially when young, due to its large, round, shiny, shallowly divided leaves. It is also known as “Anahaw” (National leaf of the Phillipines).
Trunk: Solitary, smooth, brown, with the rings of the scars of the foliar petioles in evidence and clothed with beautifully greyish woven fibres in the upper part below the crown. In its natural habitat it can grow to up to 24 metres in height but in a garden situation usually it will not grow that tall. Diameter 20-25 cm.
Leaves: Broad, erect to pendent, palmate, wider than long, almost round in outline from a very early age, shiny, glossy green and incised for about half of their length in usually rigid and stiff segments. As it gets older however, the leaves become more divided, and not quite so pretty. The leaves in juvenile palms are about 1,5 metres wide and circular, while they are smaller, costapalmate in older palms and do not form a full circle. Petioles up to 2 metres, spiny at the base on lower surface in the young plants, almost unarmed in the adult specimen and blades are shorter than the petiole.
Inflorescences: About 2 metres long, dividing into 3 main axis bearing up to 4 orders of branching, with small, yellow, bisexual flowers.
Blooming period: Spring to summer. The flowers appear in bunches only when the plant is very old. The plants that are used as potted plants do not generally flower.
Fruits: Small spherical to 1,5-2 cm in diameter red to black when ripe.
2n: 36 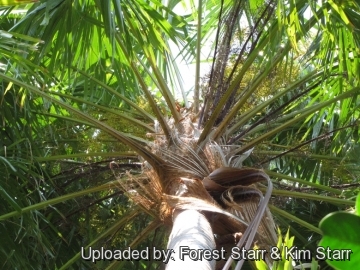 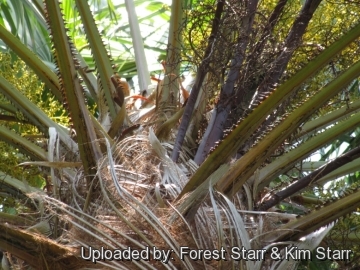 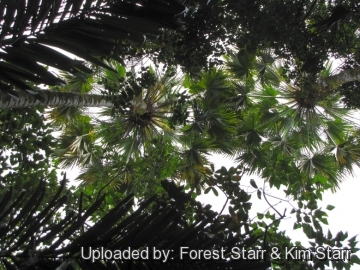 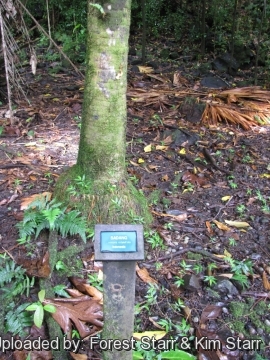 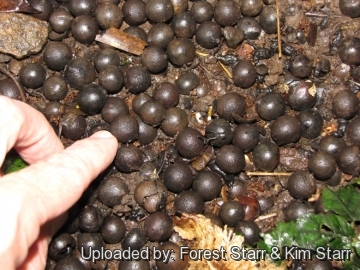 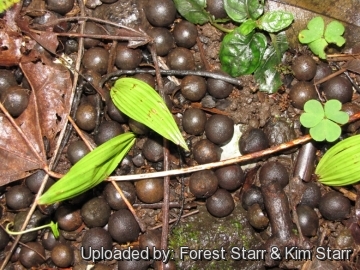 Cultivation and Propagation: It is one of the fastest growing palms in the world widely cultivated in tropical, subtropical park and gardens. It is a useful and tolerant plant that does not require any special care. A seedling can turn into a 15-20 cm trunking specimen palm in only 3 years if given fertilizer and sufficient water. It is also quite tolerant of being dug up and moved.
Soil: It is suited for fertile, loamy substrates, but it is adaptable to many kinds of well-drained soils, including clay; sand; alkaline or acidic.
Fertilization: Need a perfect fertilizer diet including all micro nutrients and trace elements or slow release fertilizer applied during the growing season, or according to package directions, using a fertilizer specifically formulated for palms.
Water Requirements: It prefers evenly moist but not consistently wet medium. Plants should be watered during dry spells and will benefit from an organic mulch. It dislikes soggy soils.
Light: It prefers bright sunny locations, but it also does well in part shade with some direct sunlight, young specimens should be partially shaded. It will also survive in rather heavy shade but "stretches" to lose its compact shape.
Aerosol salt tolerance: Scarce.
Wind resistance: It is fairly resistant to breakage but avoid strong wind.
Hardiness: It is cultivable only in tropical and subtropical climates, as it does not stand temperatures close to the zero, but for a very short period. ( ZONES: 10B, 11)
Roots: Usually not a problem
Maintenance: The lower leaves which turn brown as the plant grows need to be removed from the plant, but do not prune if the frond still has some green colour. Palms recycle nutrients from dead or dying fronds and use them for healthier fronds
Pest and diseases: It is generally a pest free plant. It could however be attacked by mealybugs and scales. It is also moderately vulnerable to lethal yellowing disease.
Uses: It is used massively in gardening and landscaping in many parts of the world. Its neat form makes it ideal for staggered groupings, street, parking lot island, sidewalk, highway median or used as a free-standing specimen. They form a closed canopy when planted about 3 m apart along a walk or street. They can thrive in harsh urban conditions. It is also excellent in containers and urns. It also tolerates shady spots and young plants are often utilized in pot for inner spaces decoration. It can adapt itself better than many other plants to the indoor conditions of our homes and buildings. It can also tolerate some amount of neglect.
Traditional uses: The leaves are used for thatching and food-wrapping.
Propagation: Fresh seeds if kept warm germinate readily within 2 months of sowing.