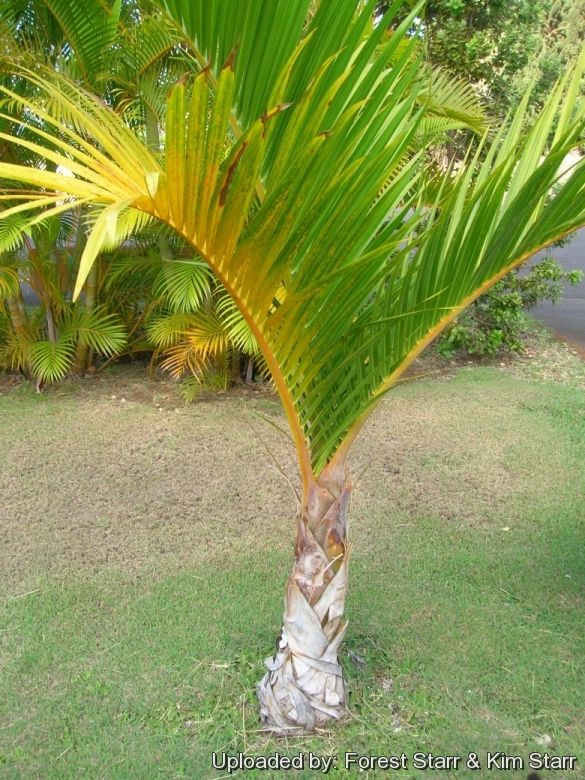 Origin and Habitat: Endemic to Grand Montagne, Anse Quitor and Ravine de la Cascade, St Louis, on the Mauritius (Mascarene) Island of Rodriguez.
Habitat: Found on limestone based soils. Critically endangered, less than 60 plants left in the wild, but quite a common palm now in cultivation.

Description: Hyophorbe verschaffeltii is one of the most splendid palms which is particularly prized for its spindle shaped trunk and elegant fronds. This palm, at least as a seedling, is one of the most colourful palms in cultivation and does not fail to attract favourable comment when rightly placed and given proper attention.
Trunk: Solitary up to about 6 m tall, spindle shaped ( swollen in its centre and thin at either end), grey with ring-like markings.
Crown: Sparse, with 3-8(-10) fronds that are held somewhat erect.
Crownshaft: Smooth, waxy, up to 90 centimetres tall rapidly tapering from a swollen base, creating a very interesting profile. Light grey-green or bright turquoise as the palm age.
Leaves(fronds): Pinnate quite short and compact 1,50-3 m long, slightly recurved or arched outward forming a 'V' shape. Leaflets 60 to 150 rigid, dark green to lime-green above and grey below which measure around 60 to 80 centimetres in length. The petiole is yellow.
Inflorescences: The infrafoliar inflorescences have large, torpedo-like spears that tend to shoot straight out of the trunks, emerge from below the crownshaft on mature specimens. They are also distinctive, being upwardly curved, and horn shaped when young. The fragrant flowers are ivory to orange in colour. There are separate male and female flowers on the same inflorescence.
Fruits: About 2 cm long and orange to red in colour. 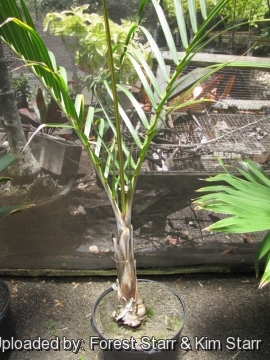 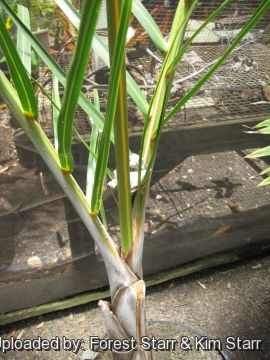 Cultivation and Propagation: This is a pretty slow palm, easy to grow adapt to tropical and subtropical climates. It unique unique shape and sculptural form together with its small canopy, slow growth and small stature make it suitable for a smaller landscape, or as a large interior potted plant. Does well in pots.
Soil requirements: It has a fibrous root system and benefits from deep organic, soils that are fertile, but thrives on wide range of tropical soils, like coastal marine alluvial clays, soils of volcanic origin, sands as long as they are well drained.
Watering: It prefers adequate moisture to look its best. Irrigation will be needed during dry spells. Don't let sit in water. Indoor, potted palms should not be over-watered. They may contract the fungus Phytophthora, if over-watered.
Light: Prefers full sun. If home-grown, give some sun as with most tropical palms.
Fertilization: Need a perfect fertilizer diet including all micro nutrients and trace elements three times a year if not grown in rich soil. Potassium and magnesium deficiencies are possible - supplement as necessary.
Aerosol salt tolerance: It is very salt tolerant.
Hardiness: This palm is fairly cold intolerant and is suited for tropical or subtropical climates but may survive very light frosts (if very short) If the palm does survive a freeze, the next few emerging leaves are stunted. (USDA Zones 10B - 11) Any temps below 4° C degrees call for protection for this palm. Seedling growth arrests below 15°C. However the hardiness of this species is quite variable depending on the climate.
Wind hardiness: It is very tolerant and even survives to strong hurricane wind with minimal damages, but will grow better with slow wind.
Propagation: The fresh seeds take 3-6 months to germinate. If not properly treated, the seed does not have long shelf life.
Garden uses: It is an excellent landscaping palm when set out on the lawn as a specimen, especially for small gardens where other palms will grow out of scale. It can be used as a specimen or accent tree in the home or commercial landscape. Plant bottle palms in containers and feature it in a prominent spot on the patio. Mass plantings are common at median strips and roundabouts in tropical towns. Warm, seaside locations are preferred for optimum growth.
Traditional uses: Leaves are used for decoration at special occasions such as weddings.
Disease & Pests: It is quite resistant to pests but may require regular fertilization to prevent yellowing caused by potassium deficiencies. They are also slight susceptible to lethal yellowing disease. Protect from frost.