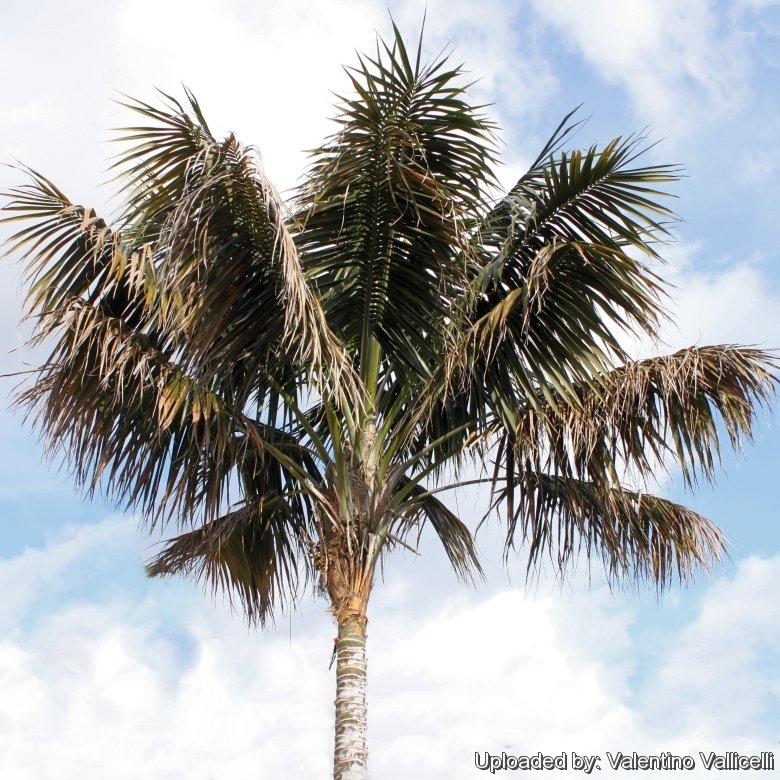 Origin and Habitat: Endemic to Lord Howe Island group, in the Tasman sea about 804 km off the eastern coast of New South Wales, Australia. It is also extensivley grown on Norfolk Island. It is used widely indoors and out as ornamental around the world. Probably it is the most widely used and most popular "house plant" of all time, dating back to the 1850s.
Habitat: It is the predominant element of the sub tropical forest of the island, up to about 400 metres of altitude. The climate on Lord Howe Island is subtropical, warm to cool.
ow in extensive colonies at low to moderate altitudes, less than 2870 ft (875 m) above sea level.

Description: Howea forsteriana is an elegant palm with long, large, arching fronds, it is slow growing, and the height may range from 4 to 9 m, and can reach 20 m in its natural habitat.
Trunk: Solitary, erect, up to 18 m tall and 15 cm in diameter, bulging at the base; young stems green but turning grey with age; ring scars are oblique and prominent, raised, and undulating. No crown shaft is formed from leaf sheaths, but the leaf-bases disintegrate into a conspicuous mass of woven brown fibres.
Crown: 3-7 m across, with 30-40 gracefully drooping fronds which produce an airy and poised look.
Leaves: Pinnate, reduplicate, large, arching 3-4 m with long, not armed, petioles, eventually held more or less horizontally. Leaflets (pinnae) linear, dark green (lighter green on the bottom), with prominent secondary veins and yellowish midrib, rather distant, horizontal or pendulous and regularly arranged in a single plane, up to 80 cm long and 2-5 cm wide. It has distinctive glands at the base of each pinna.
Inflorescence: Pendulous 1-2 m long with 3-8 spikes growing from a leaf axil. It is a monoecious species, staminate (male) and pistillate (female) flowers are produced on the same inflorescences and are white in colour.
Fruit: Several en-masses, narrowly ellipsoid up to 4-5 cm long and red or maroon when ripe, maturation which takes place slowly (3-4 years), thus the same plant can present simultaneously, inflorescences and infrutescences with fruits at various stages of ripening (green, yellow, and dark red).
Remarks: The similar Howea belmoreana, also endemic on Lord Howe Island, is less than 7 metres tall, has leaflets that are held in a V-shape and are dark green above and below, and grows in shade under higher trees and palms in humid forests. 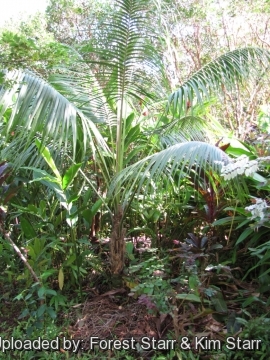 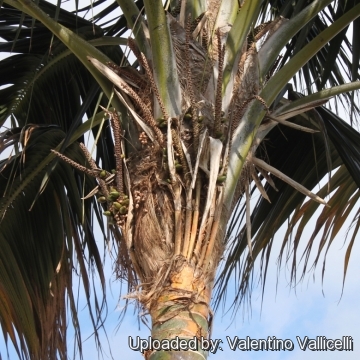 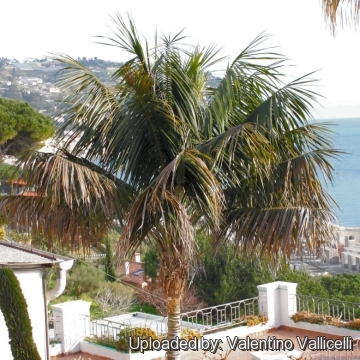 Habit at Bordighera, Liguria, Italy. Photo by: Valentino Vallicelli
Send a photo of this plant.

Cultivation and Propagation: This palm is an excellent relatively slow-growing garden plant adapt to different climates, from tropical to warm temperate. It is also one of the most elegant and one of the most durable of all indoor palms. They have an awesome track record for surviving low light, dust, central heating, rough handling, drought and general neglect.
Soil requirements: It prefers well-drained fertile, soils except those that are constantly soggy. However it is widely adaptable including those that are neutral, acidic, clayey and slightly alkaline.
Watering: It prefers regular waterings and should be watered before the soil completely dries. This palm a will tolerate occasional dryness if not prolonged. Don't let sit in water. Indoor, potted kentias should not be over-watered. They may contract the fungus Phytophthora, if over-watered.
Light: Outside they grow best in half sun and tolerating direct sun only after about five years old. Young specimens need protection from direct sunlight and grow best in shady to partly shady locations. If home-grown, they look their best in bright diffuse light but tolerate very low light levels and are considered exceptional in their ability to withstand low interior light levels.
Fertilization: Need a perfect low-release fertilizer (e.g., 18-18-18) diet including all micro nutrients and trace elements. It is subject to magnesium and potassium deficiency.
Aerosol salt tolerance: They grow very well in coastal areas and are quite wind resistant.
Hardiness: They grow well in tropical and subtropical climates but will also grow in a cooler climate, and mature, established specimens can tolerate temperatures down to -5 °C without incurring significant damage to foliage, but only for a few hours; normal temperatures should not go below 10°. (USDA Zones 9B-11)
Wind hardiness: It can tolerate sweltering heat and windy conditions.
Maintenance: Remove dried fronds.
Use: It is grown in open air, in the sub tropical and warm-temperate zones, for the decoration of parks and gardens, in a partly shaded location when young, and regularly watered. But the most frequent utilization, since from the introduction in Europe, is as indoor plant, its elegance, since the very first years of age, the adaptability to conditions of scarce luminosity, and the absence of particular attentions, render it, still now, one of the most utilized palms, if not the most common, for the decoration of indoor spaces.
Disease & Pests: It is quite resistant to pests but may require regular fertilization to prevent yellowing caused by potassium deficiencies; protect against spider mites, scale insects, Cylindrocladium leaf spot, stigmina and other fungal leaf spots. They are also susceptible to lethal yellowing disease. Protect from frost.
Propagation: by seeds that germinate erratically, with seedlings appearing as early as 80 days after planting and then sporadically over 1-3 years.