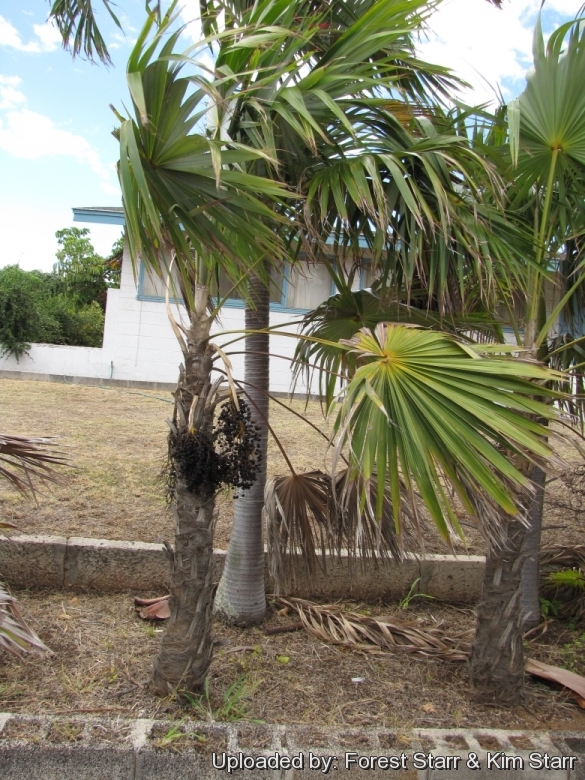 Origin and Habitat: Lesser Antilles ( Antigua, Barbados, Barbuda, Dominica, Guadeloupe, Marie Galante, Martinique, Saint Lucia, Trinidad, Tobago) Puerto Rico, the Virgin Islands, the Windward and Leeward islands, and Margarita Island in Venezuela (It was probably present throughout the Lesser Antilles, but was extirpated on many of them)
Habitat: Grows in coastal forests and scrub woodlands on dry coastal low hills and slopes on limestone soils from sea level to 610 m elevation.

Description: Coccothrinax barbadensis is a medium sized solitary fan palm with a thin trunk and an open graceful crown. The leaves have slightly drooping tips, and a silvery underside.
Trunk: Slender, cylindrical, grey, ringed, smooth 2,5-15(-21) m tall and 5-20 cm in diameter. Most of the trunk is bare with the leave bases retained in the trunk and non-split, but usually there are some thick black fibres on the upper trunk area, just below the leaves; petiole not grooved on top, about 100 cm long,
Crown: Graceful open crown.
Leaves: Fan-shaped (palmate) up to 100 across with 36-60 leaflets, the longer of them up to 75 cm long, green on topsides and silvery-white on the undersides. The leaves often rotate when the wind blows, creating beautiful alternating patterns of green and silvery white.
Inflorescence/flowers: 25-45 cm long, dense and multi-flowered, consisting of 3-10 branches bearing white or pale yellow fragrant flowers. Monoecious (having both male and female parts); stamens 9-12.
Blooming season: Summer.
Fruits: Flattened-globose, purple-black about 6-75 mm in diameter, pedicels 1-5 mm long. In winter the palm may produce as many as 1300 bunches of fruit. Each bunch may weigh up to 1 kilogram, which means an adult palm may produce 1200 kg of fruit.
Seed: Unusual with six or more narrow, branched grooves. 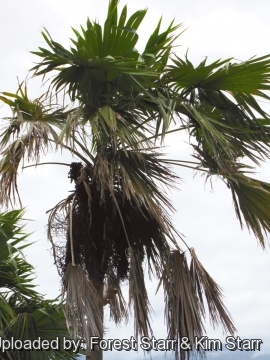 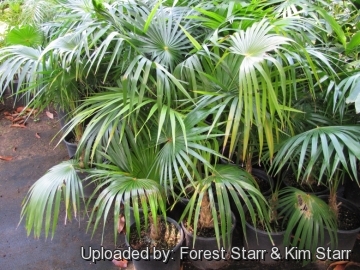 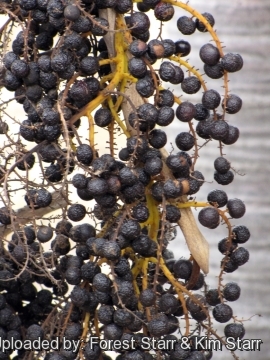 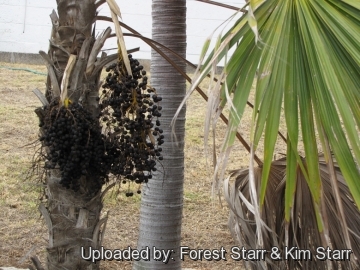 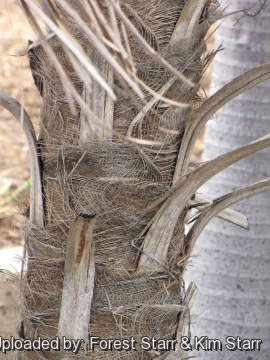 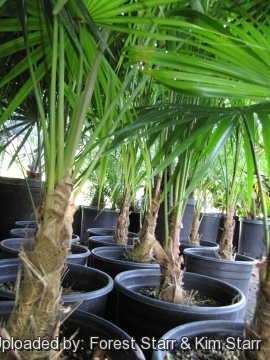 Cultivation and Propagation: This palm is an excellent relatively fast growing (for a Coccothrinax) palm adapt to different climates, from tropical to warm temperate. Lives well under average conditions with moderate maintenance.
Soil requirements: It prefers well-drained fertile, calcareous alcaline or sandy, soils except those that are constantly soggy. However it is widely adaptable and can even thrives in poor soils, but do better when grown in nutrient-rich soils with regular watering.
Watering: It prefers frequent watering. This palm a will tolerate occasional dryness if not prolonged. Don't let sit in water.
Light: It adapts well to full sun.. If home-grown and give some sun as with most tropical palms.
Fertilization: Need a perfect fertilizer diet including all micro nutrients and trace elements. It is subject to potassium deficiency.
Aerosol salt tolerance: It is moderately salt tolerant, but does a lot better inland then it does on the coast.
Hardiness: Grows best in tropical regions USDA Zones 9-12. It is not particularly tolerant of severe frosts, but is surviving to temperature of about -3° C. Juvenile silver palms need protection during freezing temperatures.
Wind hardiness: It can tolerate sweltering heat and windy conditions.
Aerosol salt tolerance: It is moderately salt tolerant.
Maintenance: Remove dried fronds.
Use: It is grown as an ornamental plant in gardens in tropical and subtropical regions, and elsewhere indoors. For its tall and graceful stem it is perfect for lining streets, driveways and boulevards. It also can be used as a solitary specimen palm, in formal groupings and groves in large, open areas. Young plants can be grown in containers in patios and porches or indoors in atriums or conservatories.
Other uses: It is used to make brooms for local consumption and export and also for hats, baskets, and other kraft-works.
Disease & Pests: It is quite resistant to pests but may require regular fertilization to prevent yellowing caused by potassium deficiencies.
Propagation: Fresh seeds germinate within three months or more. If not properly treated, the seed does not have long shelf life.