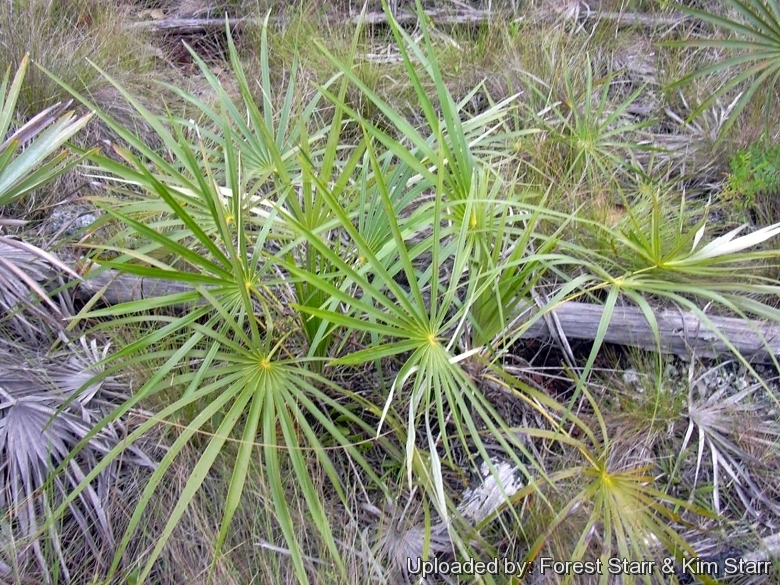 Description: The silver palm (Coccothrinax argentea) is a medium sized fan palm growing about 10 m tall. It is also commonly known as the thachpalm because its leaves was used for weaving hats and baskets.
Trunk: Solitary, or rarely clustered, grey to blackish, slender, up to 20 cm diameter, covered in a woven thatch of fibres smooth in the older basal parts.
Leaves: Circular, palmate (fan-shaped), deeply lobed, dark green above and silvery coating below, 1,5 m wide. Leaflet rigid when young, and only slightly pendent when older, divided almost all the way to the hastula with transverse veinlets on the undersides. The leaves are borne on fairly long petiole stems, which make the canopy look graceful in the wind.
Inflorescences/flowers: The inflorescences are short, branched and grow out just below the leafy canopy; Flowers are tiny yellowish or ivory.
Blooming season: Flowers intermittently in the warmest months. They grow out just below the leafy canopy, filled with tiny yellowish ivory blossoms that later become round black fruits.
Fruit: Round purple-black.
Remarks: This species is frequently confused with Coccothrinax argentata (from southern florida) that is a bit faster growing, transplants more easily and has slightly less silvery leaf undersides.

Cultivation and Propagation: This palm is an excellent plant adapt to different climates, from tropical to warm temperate, it is always slow-growing taking decades to reach tree-like heights.
Soil requirements: It prefers well-drained fertile soils except those that are constantly soggy. However it is widely adaptable and can even thrives in poor soils, but do better when grown in nutrient-rich soils with regular watering. It tolerates alkaline soils with ease.
Watering: It prefers regular watering but does not mind drying out between waterings and, once established, tolerates drought. It prefers to be kept drier from fall to early spring. Don't let sit in water. Irrigation striking the trunk encourages fungi that can lead to lethal decay.
Light: It adapts well to full sun.. If home-grown, give some sun as with most tropical palms.
Fertilization: Need a perfect fertilizer diet including all micro nutrients and trace elements. It is subject to potassium deficiency
Aerosol salt tolerance: It is moderately salt tolerant, but does a lot better inland then it does on the coast.
Hardiness: It adapts readily to cultivation in warm temperate, and tropical areas that don't receive winter frosts and freezes.
Wind hardiness: It can tolerate sweltering heat and windy conditions.
Aerosol salt tolerance: It can tolerate salt spray without any damage.
Maintenance: Prune diseased, damaged or drying fronds, but do not prune if the frond still has some green colour. Palms recycle nutrients from dead or dying fronds and use them for healthier fronds. Palms only have a set number of new leaves that can sprout and grow per year and removing fronds will not increase that number. If you cut off more than what will grow annually, you could be left with a pretty bare and bald palm. Some customers want leaf boots or leaf bases (the portion of the leaf that connects it to the trunk) and ﬁbers, removed from the trunk; this is biologically unnecessary. Do not injure living trunk tissue when removing ﬁbers. Palms cannot be headed because there is only one bud. If the bud is damaged or removed, the palm will eventually die.
Uses: Food, Traditional medicine, ornamental, embroidery/basketry
a) Food: Very young leaves are eaten as a vegetable.
b) Traditional medicine: It is also used medicinally by traditional healers to treat uterine fibroids and hot flashes.
c) Embroidery/basketry: The leaves are used for weaving hats and baskets.
d) Ornamental: It is grown as an ornamental plant in gardens in tropical and subtropical regions, and elsewhere indoors. Use this palm as an accent in a tropical rockery, seaside garden, or any sunny water-conservation landscape.
Remarks: The plant does not transplant well, having very sensitive roots that tend to die off if manipulated.
Propagation: Seeds.