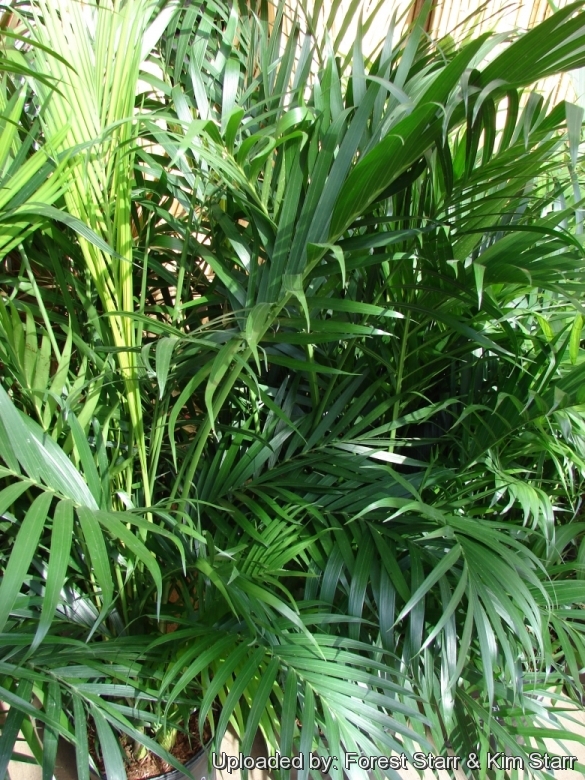 Origin and Habitat: South-eastern Mexico along the Atlantic slope.
Habitat: Creeks, waterfalls, stream banks and beds in the rainforests. This plant is a rheophyte, which means that it grows in stream beds, and is often half-submerged by flood-waters. Its long thin leaflets, and trunkless habit are an adaptation to present as little resistance as possible to flowing water, and thus prevent being washed away each time it floods.

Description: Chamaedorea cataractarum is a small, trunkless, clumping palm that grows to 1 metre tall indoors and 2 m tall and 4 m across outdoors. It is a very common palm, often sold at outlet nurseries.
Stems: Slender, erect or creeping and branching, like thick green rhizomes, cane-like and often dichotomously branched.
Crown: Each crown bears two to six upright to arching,
Leaves: Pinnate, reduplicate, to 30 cm long with yellowish midrib; leaflets glossy, dark green, without spines or obvious tomentum, linear to lanceolate, with two secondary veins prominent on under surface, evenly spaced along the rachis, slightly drooping and spreading in a single plan.
Inflorescence/flowers: Flower stalks pendulous up to 50 cm long, branched to one order with up to 15 branches; flowers yellowish male or female, borne on different plants but often both occur in the same group of plants. After releasing pollen, male stalks wither. If female flowers are pollinated, the stalks turn a bright orange colour as the seeds mature.
fruits: Oblong or ovoid 10-12 mm long, 6-10 cm in diameter, shiny and dark green turning black when mature. Fruit remains sessile on the flower stalk.
Remarks: Other Chamaedorea species, but few others have a clumping habit. Chamaedorea radicalis is similar, but has longer leaves and Chamaedorea microspadix has a clumping habit, but red fruit.

Cultivation and Propagation: It is a pretty versatile suckering palm that likes a humus-rich, slightly acidic soil. It is cultivated in tropical and subtropical regions as garden plant and also as house plant. It does best protected from drying winds.
Fertilization: Need a perfect fertilizer diet including all micro nutrients and trace elements or slow release fertilizer applied every one or two months, or according to package directions, using a fertilizer specifically formulated for palms.
Water Requirements: It loves water and its virtually impossible to give it too much, do not let dry out between waterings. It endures damp conditions for most of the year and can grow in boggy situations without a problem, either. Also performs well as an indoor palm, though sometimes it's hard to keep it as moist as it would like... but it does take a good deal of dark without too much problem. Sometimes has water issues indoors- as salts build up in the pot, leaves brown tip and look bad. Need to take it outdoors and thoroughly water then, to get the salts to rinse out. Best if you have non-tap water to use.
Light: It can grow in semi-shade (light woodland) or in full sun and requires high light for indoor cultivation.
Hardiness: The suggested minimum temperature is 4.5°C, but tolerates several degrees of short-lived frost (USDA zones 9b -10).
Aerosol salt tolerance: It has no drought or salt tolerance.
Maintenance: For the healthiest and most attractive plant, keep the cat palm pruned. Remove any yellow-brown, diseased, damaged or drying fronds, but do not prune if the frond still has some green colour. Palms recycle nutrients from dead or dying fronds and use them for healthier fronds.
Uses: It is cultivated as an ornamental bush, and planted in gardens and parks. It will eventually form quite a large dense, clump given time. (It is occasionally used as a hedge plant, screen, border, or general understory in a partially shaded, moist situation.)
Pest & diseases It ids very susceptible to spider mite infestations. The leaves can be washed with soapy water to remove the mites or treated with an insecticidal spray.
Propagation: This palm reproduces sexually via seed as well as asexually, new plants sprout from the base of older plants.