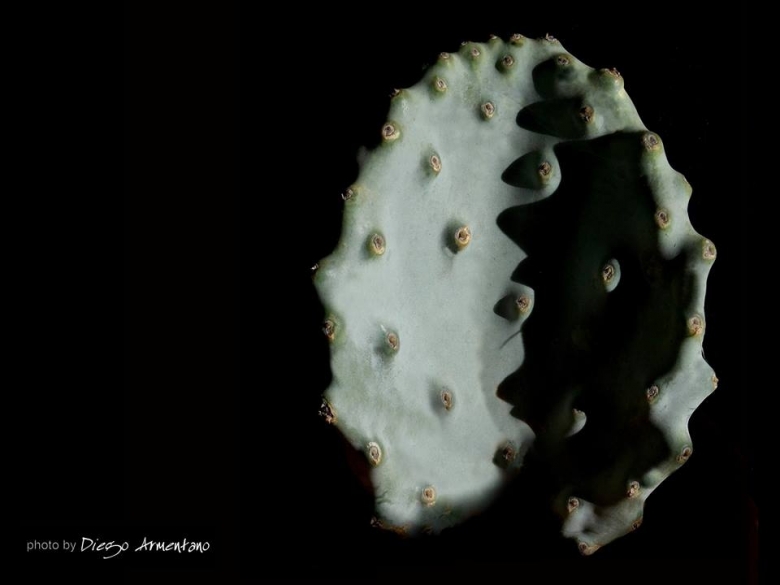 Consolea falcata Photo by: Diego Armentano
The surfaces is scarcely tuberculate, but not reticulate.

Origin and Habitat: Northwestern Haiti. Consolea falcata is known from only a single locality on the coast, in the coastal thickets west side of Saline Michel (Port-de-Paix), 100 m from the beach on a ridge. The population was estimated to number less than 12 individuals. It might have been severely reduced or even become extinct during the flooding event in 2008. If any plants remain, the population is potentially decreasing.
Altitude range: It occurs just above sea level.
Habitat and Ecology: This species occurs on bare coastal limestone soils with no associated vegetation. Mature individuals are small compared to other Consolea species. The main threats for this species are severe land degradation from deforestation and flooding events.

Description: Consolea falcata is a treelike cactus with very dark, glossy green upright, arms, to 1.5 m high. The flattened pads are much longer than they are wide, with only a modest number of spines if there are any at all. Hunt et al. (2006) treated this taxon as being synonymous with Consolea macracantha (Griseb.) A.Berger. It is considered a good species here.
Derivation of specific name: The epithet 'facata' is formed from the Latin 'falx', a sickle or sickle-shaped instrument, and the possessive adjectival suffix '-atus'. Refers to the shape of the cladodes. Sickleshaped Opuntia.
Stem segments: Somewhat elongated, to 35 cm long and 9 cm wide, sometimes sickle shaped, the surfaces occasionally with small prominences (scarcely tuberculate) but not reticulate. Young segments are dark glossy green, older ones may be covered with a light pruinose surface.
Spines: 2-8 or (usually) absent, needle-like, rough, yellowish to pale brown, 1-4 cm long, but with glochids of course.
Flowers: Reddish, 2-5 cm in diameter, diurnal.
Chromosome number: 4n = 88. Consolea falcata, an octoploid (n = 11)

Cultivation and Propagation: Consolea falcata is a much decorative cactus seldom found in cultivation. It is a tropical summer grower species that offers no cultivation difficulties. This cactus can be grown as a shrub or miniature tree, and may look attractive as it. Its green joints and yellow-orange flowers provide a striking accent for an otherwise dormant cactus garden.
Soil: It will grow in any kind of drained soil, and will resist to droughts, but prefer regular waterings. In pot culture use a draining substratum, as it is sensitive to rottenness when in presence of humidity and low temperatures and let the soil dry out between waterings.
Repotting: Repot in the spring, when their roots become cramped. Generally, they should be repotted every other year in order to provide fresh soil. After repotting, do not water for a week or more.
Water: In summer, during the vegetative period, it must be regularly watered, but allowing the substratum to completely dry up before irrigating again (but do not overwater ); in winter, it’s to be kept dry. Preferable not to water on overcast days, humid days or cold winter days.
Hardiness: It is not a frost resistant cactus, hardy to -2° C or less if very dry. However in cultivation it is better not to expose it to temperatures lower than -5° C, even if in an aerated and protected location, in order to avoid the formation of anti-aesthetic spots on the epidermis. In presence of high atmospheric humidity avoid any frost as it is particularly sensitive to root rot. It can handle extremely high temperatures in summer.
Exposure: Outside full sun or afternoon shade (but adapt to shade too), inside needs bright light, and some direct sun.
Use: It is suitable for “desert” gardens, in association with other xerophytes. Where the open air cultivation is not possible due to the climate, it is to be cultivated in pot in order to shelter it in winter.
Warning: Some clones are armed with spines that are sharp. Handle it with extreme caution, and keep it away from gangways and areas frequented by children and animals. Spines must be meticulously removed with tweezers.
Propagation: Can be propagated by cuttings. Prickly pear pads root easily and grow rapidly when placed in loose, well-draining soil.