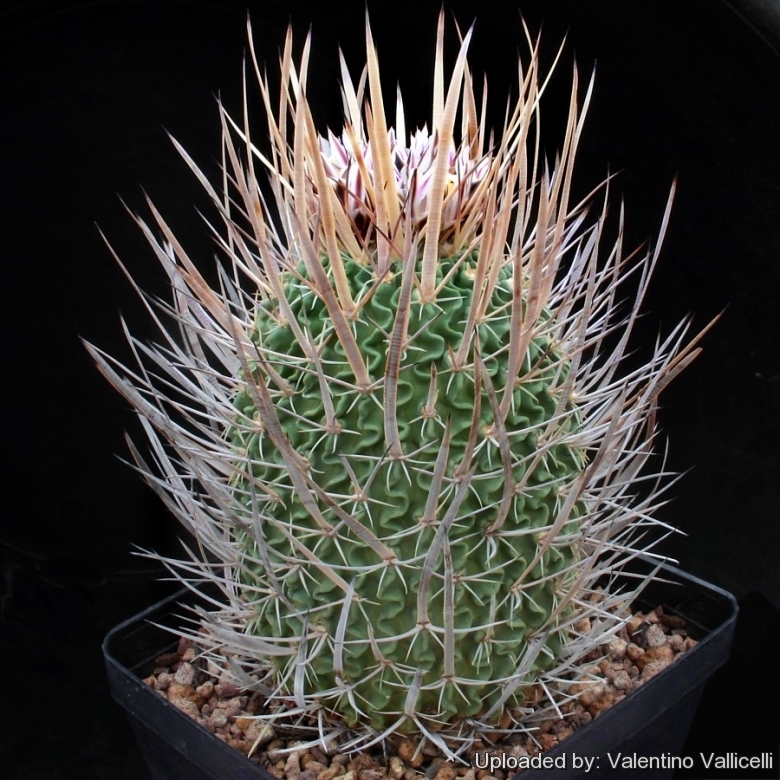 Origin and Habitat: Stenocactus phyllacanthus is endemic to Mexico, occurring in the states of Aguascalientes, Guanajuato, Hidalgo, Jalisco, Nuevo León, Querétaro, San Luis Potosí, Zacatecas.
Altitude range: It grows at elevations of 1700-2800 metres above sea level.
Habitat and ecology: This species occurs in desert scrub where it grows and hides in high grass, and the spines that looks like dried grass leaves, make the plants almost invisible in their natural environment.

Description: Stenocactus phyllacanthus, best known as Echinofossulocactus phyllacanthus, is a round cactus with the upper central spines three-pronged long, flattened grass-like and numerous wavy ribs, it is distinguished from similar wavy ribbed species by its small yellowish flowers and few radial spines. Older plants sometimes get corky near the base. There is a general lack of understanding on the taxonomic position of this species within the genus and thus is it no possible to define either the spatial or systematic limits of the taxon. There is much variation within the current taxon, and most of the "phyllacanthus" - especially those with pink o violet striped flowers - may correspond to other species.
Stems: Usually solitary, occasionally few branched, depressed globose to short cylindrical, dull green or dark bluish green, flat or somewhat depressed apically, 3 to 15 cm. high, 4-10 cm in diameter.
Ribs: (25-)30 to 35(-60), very thin, strongly undulate.
Areoles: Only a few to a rib (mostly 1-2), white-tomentose when young.
Spines: Shorter and less dense than in other species the main one broad and flattened.
Central spines: 1-3, lance shaped, reddish at first, becoming brownish or grey, 30-80 mm long, upper one, or rarely 2 spines, much elongated, erect or connivent over the top of the plant,
flattened, thin, somewhat annulate.
Radial spines: 2-7, straight, weak-subulate, white, bristly or awl shaped, and
spreading 4-9 mm long.
Flowers: Born singly or 2-3 together, produced sporadically all-through spring and summer, yellowish white with brownish red throats, 15 to 20 mm long. Tube short. Inner perianth-segments acute.
Fruits: Small, green.
Remarks: Stenocactus tricuspidatus (a multiheaded species) has been moved into Stenocactus phyllacanthus in the most recent revisions.

Subspecies, varieties, forms and cultivars of plants belonging to the Stenocactus phyllacanthus group

Cultivation and Propagation: Easy to to care and flower. No absolute schedule can be given for watering as various factors (Soil mixture, containers, drainage, temperature, size of plant) influence water use, so - as a general rule - the soil should be thoroughly wetted at each watering during the active growing season (spring and summer), water when the top 1,5- 2 cm of soil feels dry to the finger. Do not soak the soil during the dormant period. Be careful, excessive watering can make root and/or stem to rots. Make sure there is good air circulation between plants. Good drainage is essential along good moisture retention properties and adequate nutrients availability. Require bright sunlight to grow well. Dormant plants do best at temperatures from 5-10°C (but will tolerate -5° for short periods). The cooler temperatures develop sturdier plants and encourage the formation of flower buds.
Pests: The narrow ribs, the wooly areoles, and the dense spines are an ideal habitat for mealy bugs. Frequent inspection of the plants will prevent them from spreading.