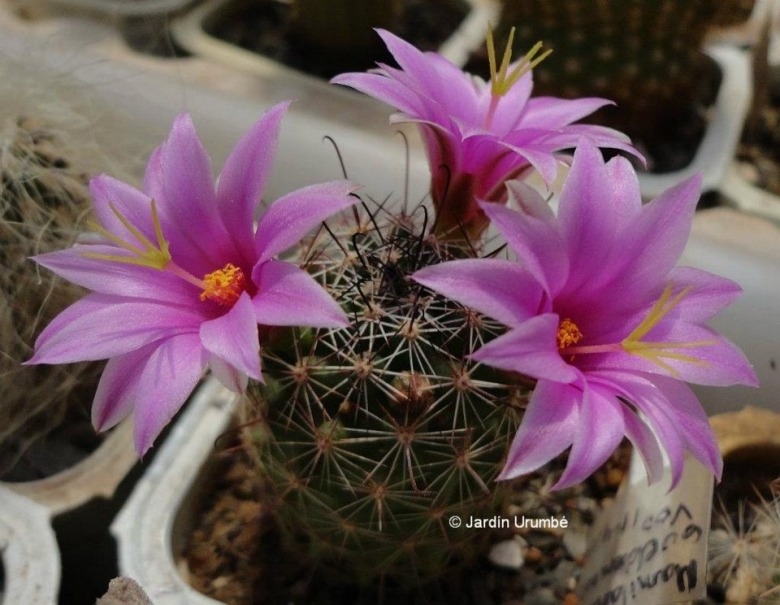 Origin and Habitat: Mexico, Chihuahua near Batopitas; Sonora near Navajoa amd Alamos; Sinaloa near El ranchito.
Altitude range: 200-1300 metres above sea level.
Habitat and ecology: Mammillaria gueldemanniana green valleys, in sandy soil with a bit of humus. The variety guirocombensis has been found over a much larger area in southern Sonora, the northeast corner of Sinaloa, the southwest corner of Chihuahua and on the slopes of the western Sierra Madre, at higher altitudes.

Description: Mammillaria gueldemanniana is clumping mammillaria species that becomes shrublike by putting out numerous basal shoots. It is generally included within (as a synonym of) Mammillaria sheldonii, suggesting that there is not really a fundamental difference between the two (aside from bigger flowers for M. gueldemanniana, not many differences), and hard to name accurately without knowing where they come from, and there remains a considerable confusion surrounding the true identity of this this plant.
Stem: Strongly clumping, globular at first, becoming cylindrical to columnar, somewhat sunken apex, stems light grey-green, spines nearly obscuring the stem, 10-20 cm high and 3-5 cm in diameter.
Roots: Fibrous.
Sap: Without latex.
Tubercles: Cylindrical, closely set, soft to rather firm and fleshy, rounded toward the apex and quadrangular, wide and glabrous at the base, keeled ventrally, 7-12 mm long and 5-8 mm wide. Axil mostly naked.
Radial spine: 12-22, slender, straight, needle like to bristle like, smooth, spread out horizontally, whitish with brown tip about 5 mm long.
Central spines: 1 to 4, mostly 1, needle like, one hooked (occasionally straight), smooth, brown to black, 2-14 mm long (short about 2 mm long in var. gueldemanniana and 10 or more mm long in var. guirocombensis).
Flowers: Funnelform to broad funnelform, 18–25 mm long and 16–35 mm in diameter, carmine pink with a crimson throat. (The flowers are bigger and open wider in var. guirocombensis)
Fruits: Club-shaped, scarlet-red, small 10-25 mm long and 4-7 mm wide.
Seeds: Spherical, black, 1 mm long and 0,8 mm wide, ventral hilum. Selfsterile.
Phenology: It blooms several times a year in summer. The fruit ripens about one year after flowering.

Cultivation and Propagation: This plant is not famous for being easy to cultivate, but in good conditions with excellent ventilation, it grows without difficulty. It is especially sensitive to over-watering. So careful watering and an open mineral potting soil are a must. Avoid the use of peat or other humus sources in the potting mixture. Don't add limestone to the potting mix, which must be moderately acidic. It can be sensitive to frost (but some population are resistant to -10° C). It requires maximum sun exposure to reach its full potential, and to achieve success in flowering. A winter rest that allows the plant to shrivel (perhaps losing up to 25% of its summer height) will encourage flowering and long time survival. Be careful to encourage slow growth.
Propagation: Seeds or offsets.