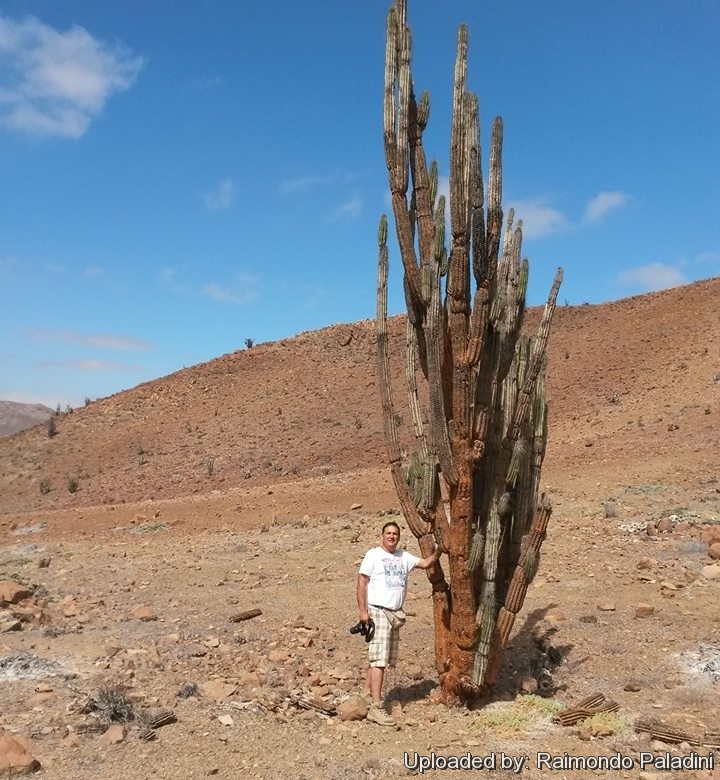 Origin and Habitat: Eulychnia iquiquensis is endemic to a narrow coastline no more than 5 km width in the vicinity of Iquique, Tarapaca, in the Atacama Desert in northern Chile (from the Camaraca mountain to Chañaral), as well as in the I, II and III regions of Chile. The population densities are low.
Altitude range: Between 0 and 1,100 metres above sea level.
Habitat and Ecology: This species occurs always in coastal areas (lomas costeras) on the coastal range of Chile, and is not found on the pampas, which extend east of the coastal hills to the Andes. It grows in barren areas where rain has not fallen since time immemorial and it is the most conspicuous plant seen, in fact it is the only woody plant met within its restricted area. High mortality rates north of Antofagasta, Chile are fragmenting the subpopulations. Most of the large stands of Eulychnia iquiquensis, the most visible plants in the area, are in terminal decline (due to prolonged droughts) and largely consist of dead individuals with little, if any, seedling regeneration. Furthermore, it is present in several protected areas.

Description: Eulychnia iquiquensis is a treelike cactus, branching near the base, 2-7 metres high with short trunks, when old quite spineless below, but very spiny toward the top. For the most part, Eulychnias can hardly be called handsome plants, and E. iquiquensis is certainly no an exception. Their growth is irregular, and their constant struggle for moisture must take its toll on any fancies the plants might have toward symmetrical or regular development, so many of them are raggedy and sometimes downright ugly. In nature the lack of rainfall results in a pallid grey colour, sometimes downright ugly. Most of the plants become covered with prime and dust that is never removed by cleansing rain, and they resemble drab fossils more than living plants. Parts of the plants are usually dead or dying, and the living parts may be dormant, so that it is difficult to ascertain which is which [2].
Derivation of specific name. "iquiquensis" For the occurrence near the city of Iquique, Chile. [3]
Stems: Trunk usually very short, 20 to 25 cm. in diameter, its outer layers pulpy and yellow, straight, with many branches from near the base, these nearly erect or more or less spreading and sometimes branching above, robust
Ribs: 12-15, broader at base than above, somewhat tuberculate, separated by acute intervals.
Areoles: Areoles of the joints large, 5 to 10 mm in diameter, closely set, sometimes with only a very little space between them, densely filled with short, white wool. On many old stems and branches the areoles die and fall, leaving a row of indentations along the top of the ribs.
Spines: On vigorous sterile shoots about 12 to 20 at an areole, not differentiated as centrals and radials, variable, erect, most of them about 1-2 cm. long, while 1 or 2 are very stout, straight, elongated, and sometimes 12 cm long; on flowering branches the spines numerous, soft and hair-like or some of them bristle-like.
Flowers: Flowers borne near tips of branches, broadly bell-shaped, white, 5.5-6.5 cm long including the ovary; receptacle-tube short, bearing numerous scales with woolly hairs. Flower-buds globular, covered with long, white, silky hairs; inner perianth-segments white, short.
Fruits: Globose, 5-6 cm in diameter, fleshy, acid, densely clothed with white hairs.
Taxonomy notes: According to the Peruvian cactus specialists, the northern subpopulation, which is classified as a subspecies (subsp. ritteri) by Hunt et al. (2006), should be reclassified as a separate species. The subsp. ritteri occurs on the coast of Arequipa, Chala and Atiquipa. The Peruvian and Chilean subpopulations are separated by approximately 600 km.