Origin and Habitat: Echinopsis strigosa is endemic to western Argentina, where it is present in the provinces of Catamarca, La Rioja, Mendoza and San Juan. This species is very common in the deserts of the Province of Mendoza, especially about the city of Mendoza, and in the mountain valleys farther to the west.
Altitude range: E. strigosa occurs from 700 to 2,000 metres above sea level.
Habitat and Ecology: This species is associated with rocky soils in shrubby habitats together other Cactaceae such as Gymnocalycium saglionis, Echinopsis leucantha, Denmoza rhodacantha, Cereus aethiops, Echinopsis leucantha, Opuntia sulphurea, Maihueniopsis glomerata, Eriosyce strausiana and Trichocereus candicans. This species is common and abundant in several localities. It is present within protected areas, has no major threats and is not used. 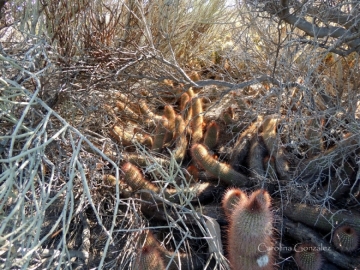 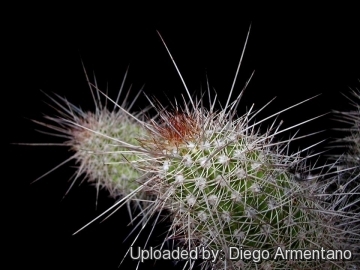 Cultivation and Propagation: Echinopsis strigosa is very easy to grow and cold hardy as low as -7°C (or less).
Growth rate This species produces noticeable amounts of growth each year if kept well fed and watered throughout the warmest months, particularly if it has been acclimatised to accept full sun. Once this cactus is established it can easily produce 10 cm of growth every year. Plants grown in the ground form soon imposing specimens.
Sun Exposure: Outside full sun, inside needs bright light, and some direct sun. During winter month, put them in a cool luminous place and encourage them to enter winter dormancy by withholding water and fertiliser over the winter as they will etiolate, or become thin, due to lower levels of light.
Soils: It needs a fertile, well drained soil mix.
Waterings: Water the plants well and allow them to dry before watering again. This species seems to do better with a little more water than most cacti. In fact, its cultivation requirements are really more like 'normal' plants than most other cacti.
Fertilization: During the growing season fertilize them monthly with a balanced fertilizer.
Pest and diseases: They are susceptible to fungal diseases if overwatered, but are not nearly as sensitive as many other cacti, especially in warm weather. They tend characteristically towards black rotted spots unless watering is moderate and only in hot weather, if kept damp through cold periods, they will invariably suffer.
Propagation: Cutting or from seed. The seeds are quite easy to germinate and grow. Their main requirements consist of high humidity levels, free-draining soil mix, and enough water, light, and nutrition.