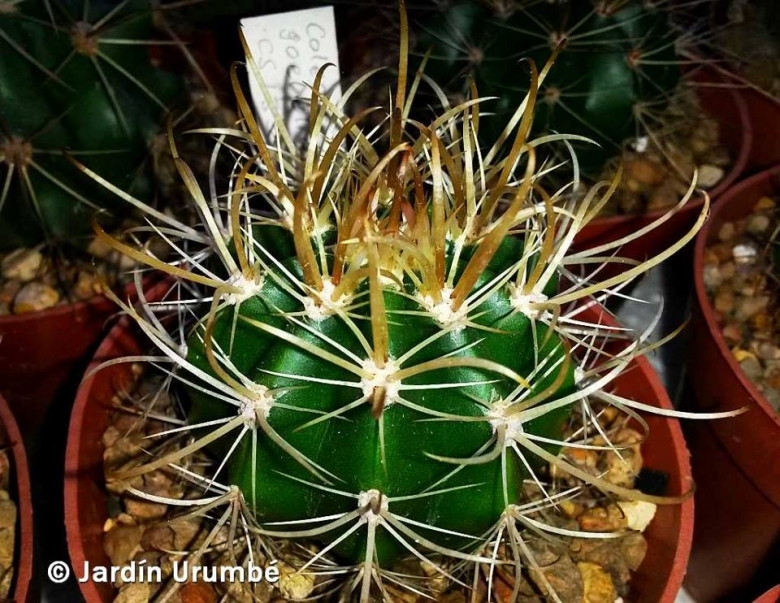 Origin and Habitat: South central Bahia and northern Minas Gerais, in eastern Brazil. The species was locally abundant and now is scarce because its habitat has been severely impacted.
Altitude range: Coleocephalocereus goebelianus occurs at 300-1,000 metres above sea level.
Habitat and Ecology: Most Coleocephalocereus are short columnar, often with decumbent stems branching from the base, but C. goebelianus normally forms a solitary column and grows in the caatinga (a vegetation type with pronounced dry periods) on rocky ground where its stature allows its cephalium to project above the trees. It is readily distinguishable from all other cacti in this region. Coleocephalocereus goebelianus is a conspicuous plant, albeit often hidden amongst trees occurring in the Caatinga on quartz, gneiss/granite domes (rarely in limestone outcrops) and stony soil which surrounds the hill where Arrojadoa marylanae grows. Even though the species has a relatively wide range, over a 50% reduction of the population is estimated to have occurred in the last 60 years (generation length 20 years) from habitat loss (deforestation), which affects its whole range and will not cease in the foreseeable future, hence it is listed as Endangered.

Description: Coleocephalocereus goebelianus is a large growing plant that is quite different from all other species of the genus and has been placed in its own subgenus Simplex by Nigel Taylor. The plants usually forms a solitary unbranched column up to 6 m tall. The flowering areoles are woolly and bristly and fused together to form a distinctive head (cephalium). C. goebelianus has a continuous, lateral cephalium, and in old specimens this lateral mass of wool and bristles can be as wide as the stem and some metres long. The spines are stout, hooked in seedlings, the flowers are white and nocturnal.
Derivation of specific name: goebelianus For Prof. Dr. Karl I. E. Goebel (1855–1932), German botanist and director of the Botanical Garden München.
Stems: Solitary more or less cylindrical and not mucilaginous. Occasionally C. goebelianus has axillary branches arising from lateral cephalia, which is unexpected due to stem asymmetries in cephalia and the resulting mechanical stress. Young vegetative branches usually arise from relatively far down on older well-established cephalia. While the stem tips of these specimens do indeed tilt in one direction, over time, secondary growth seems to compensate for the tilt, allowing these plants to grow to massive proportions, up to 4.5-6 meters tall with cephalia on the top 2.5 meters of such branches. And these are massive cephalia, often enveloping one-third of the circumference of the branch. Determinate growth of areoles on photosynthetic stems would render axillary branching impossible. The only option for axillary branching in C. goebelianus is via the confluent areoles in its cephalium.
Ribs: 10-20(-30) with transverse epidermal folds. In both the unbranched and branched specimens, ribs appear utterly vertical until cephalium formation, at which point they appear to bend towards the lateral cephalium.
Central spines: 8-10(-12), brown, needle-like, thin, unequal 1-5 cm long. The seedlings have a number of hooked central spines which are lost as the plants mature.
Radial spines: 15-20 1 cm or less, white.
Lateral Cephalia: Up to 1.5 (or more) m long and 20 cm wide, densely woolly, dark, bristly. A lateral cephalium consists of ribs that are devoid of chlorenchyma (green photosynthetic tissue) because all or a vast majority of epidermal cells form trichomes (hairs). Plants can start to grow a cephalium when a metre or so tall. The lateral cephalium continues growing from the apical meristem once the cephalium starts forming, usually without any reversions back to vegetative growth. In cephalia, this intensive trichome production occurs along a continuous segment of a branch, not just at discrete nodes (areoles). In a cephalium, distance between areoles drops to zero (areoles become contiguous), while the size of hairs-rich areoles increases.
Flowers: Bell shaped, white, nocturnal (bat-pollination syndrome), widely spreading, to 5.5 cm long. Pericarpel and flowering tube naked.
Seeds: The seeds have strongly convex testa-cells.

Cultivation and Propagation: Coleocephalocereus goebelianus is not difficult to grow from seed but plants are slow growing and flowering is not a realistic expectation.