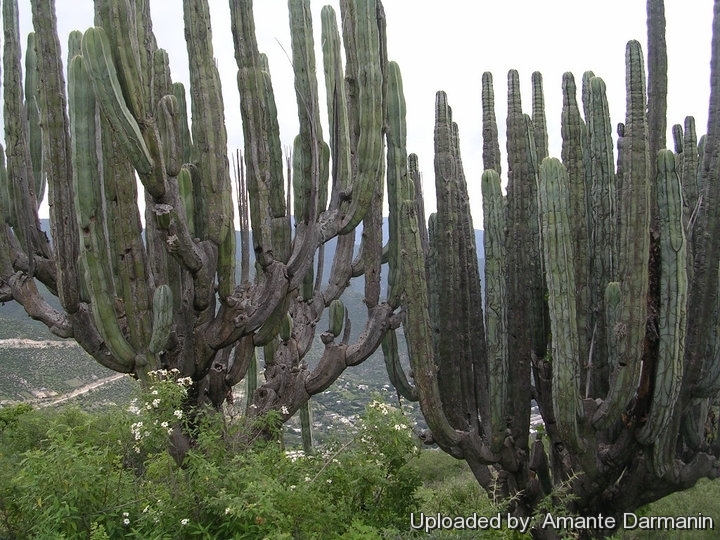 Origin and Habitat: Isolatocereus dumortieri is endemic to Mexico, where it is widely distributed. It occurs in the states of Aguascalientes, Federal District, Guanajuato, Hidalgo, Jalisco, Michoacán, Morelos, Oaxaca, Puebla, Querétaro, San Luis Potosí, and Veracruz.
Habitat and Ecology: The species is found in xerophyllous scrub, tropical deciduous forest, grasslands and perturbed tropical deciduous forest. It can grow on slopes or rocky cliffs. S. dumortieri and Cephalocereus senilis can be the dominant species in xerophyllous scrub in the Barranca de Meztitlán Reserve. The reproductive period of S. dumortieri is during the dry season, and it is the key species in the ecosystem, and many species of birds, bats and insects feed from its nectar, pollen and fruits during the dry season thanks to its capacity to store water and nutriment. The ringtail(Bassariscus astutus) eat the fruits and seeds of S. dumortieri. The bats are also considered efficient seed dispersers of this columnar cactus. Most of seeds are dispersed in fecal clumps, whereas the remaining seeds are spitted as single seeds. Seeds deposited individually around the mother plant may be of importance for local restoration and have the function of reforesting the locality, whereas ingested seeds can reach long distances and colonize new areas. There are no threats to the species.

Description: Isolatocereus dumortieri is a large candelabra-like cactus, often tree-like, 6 to 15 meters high, with a well-defined woody trunk, more than one metre long, and 30 cm in diameter and has multiple branches. The branches are erect almost from the first, with numerous constrictions, very pale bluish green or somewhat glaucous. Isolatocereus dumortieri was also known as Cereus, Lemaireocereus, Stenocereus and Rathbunia in prior lives. It was common a few years ago as Lemaireocereus dumortieri. It possesses several unique morphological features such as the small, nearly contiguous areoles, as well as its short, nearly tubular nocturnal flowers and spineless fruit, but the scales of the ovary sometimes subtend bristles, if not spines, in their axils. Greenhouse plants much resemble Pachycereus marginatus, and both species have small flowers; but the wild plants are very unlike and the fruit and seeds differ widely. Mature specimens superficially resemble Pachycereus weberi.
Stem: Trunk proper short, 6 to 10 dm long, 3 dm in diameter or more, woody. Branches many, erect almost from the first and curved inward slightly, with numerous constrictions, very pale bluish green or somewhat glaucous.
Ribs:** Generally 6, sometimes or 5 or 7, occasionally up to 9 on very old joints, triangular, with straight margins, obtuse, to 2 cm high.
Areoles: Elliptic, approximate or often confluent with age, grey-felted.
Spines: Various in number and in length, of which 6-9 (or more) radials to 1 cm, and 1-4 central, the longer ones often 5 cm long, all at first yellowish or straw-colored but in age blackened.
Flowers: Arising from apical areoles that flower more than once, sometimes forming a
crown, open during the night but lasting until midday, odorless, tubular to funnelform, short, pale green to white, to 5 cm long, the tube and ovary bearing small ovate scales with bunches of felt and occasionally bristles in their axils, the limb about 2.5 cm broad.
Fruit: Oblong, small, 2.5 to 4 cm long, reddish-orange within, not spiny, its areoles nearly contiguous, felted and dehiscent when mature.
Seeds: Brownish, mm long, dull, roughened.
Phenology:*** The reproductive period of I. dumortieri begins during the dry season in January and ends when the last fruits drop in July. 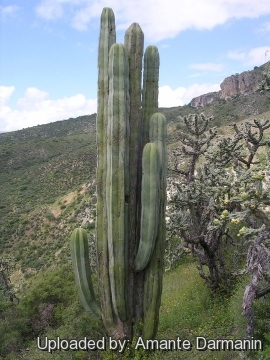 Cultivation and Propagation: It is a fairly easy plant to grow. During the summer it is best to keep the plants outside where the temperature can rise to over 30 C with no harm to the plant. Furnish good drainage and use a an open and free draining mineral compost that allows therefore roots to breath. They like only a short winter's rest and should be kept almost completely dry during the winter months, If the soil is allowed to be dry for too long root loss could follow but equally the same result would occur if the plants are both wet and cold. From March onwards the plant will begin to grow and watering should be increased gradually until late May when the plant should be in full growth.
Water regularly during the summer so long as the plant pot is allowed to drain and not sit in a tray of water. During hot weather you may need to water the plants more frequently so long as the plant is actively growing. From late September watering should be reduced to force the plant to go in to a state of semi dormancy, by October you should be back in to the winter watering regime.
Need full sun avoiding only the harshest summer sun, if kept too dark they may become overly lush and greener and could be prone to rotting due to over watering.
Feeding may not be necessary at all if the compost is fresh then, feed in summer only if the plant hasn't been repotted recently. Do not feed the plants from September onwards as this can cause lush growth which can be fatal during the darker cold months. Grown specimens resist to -4°C for a short time, but it is best to keep above 0° C to avoid ugly spots on the plant epidermis.
Traditional uses: Isolatocereus dumortieri has edible fruits and it is used as an ornamental and for fuel. In the Mixteca region is also used as wood for fencing, torches for hunting, and fuel for temazcales.
Propagation: By seeds or stem cuttings from adult plants.