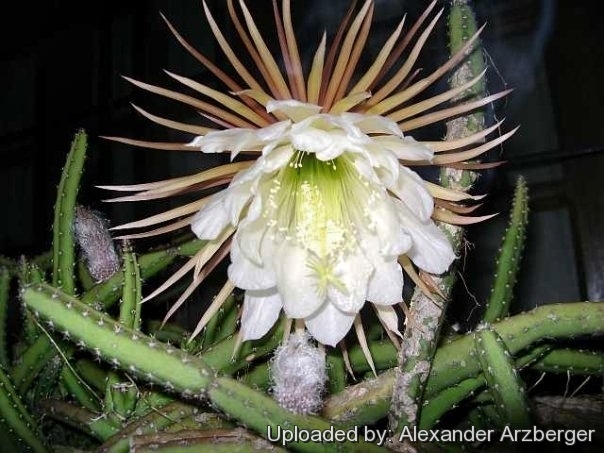 Selenicereus pteranthus Photo by: Alexander Arzberger
Around midnight the fragrant, ghostly, white flowers of are at their alluring peak. The flowers are very fragrant, trumpet-shaped nearly 30 cm long. It starts opening around 10 P.M., is fully opened about mid-night and gradually withers about dawn.

Origin and Habitat: Selenicereus pteranthus has a wide distribution, occurring in the Bahamas, Cuba, Haiti, Cayman Islands, and Mexico. In Mexico it is known from the states of Hidalgo, Oaxaca, San Luis Potosí, Tabasco, and Veracruz. Records from Campeche and Quintana Roo are doubtful. Very little is known about the population of this species.
Habitat and Ecology: It is uncertain in which type of habitat the species occurs, but it is frequently found in disturbed coastal sites, 0-10 m asl. More research is needed on the taxonomy and ecology of this species. Selenicereus pteranthus is widely cultivated for its showy, fragrant flowers and has occasionally escaped from cultivation and become naturalized in dry thicket in tropical countries.

Description: The princess of the night (Selenicereus pteronthus) is one of the most famous night blooming cactus. It is a perennial, vinelike, clambering or scrambling, spiny, leafless epiphyte, with four-to-six-angled stems about 4 cm thick, the spines are conic 1-3 mm long, solitary or in clusters of two to four. The flowers are spectacular, very fragrant, trumpet-shaped nearly 30 cm long. The outermost petals are a dull bronze or purplish brown and surround an inner core of pure white petals. There are many stamens of light green to a cream while the style is off-white with a touch of green at the base. Around midnight the fragrant, flowers are at their alluring peak.
Note. There is disagreement about the validity and identification of this species. It is often confused with Selenicereus grandiflorus and there are difficulty in distinguishing it from other species in the genus too.
Stems: Stout, snakelike, sprawling or pendent, 1-3 m long, 2.5-5 cm in diameter, bluish green to purple, strongly 4 to 6-angled. Ribs of young branches acute, sometimes 2 to 3 mm high.
Roots: Frequently aerial and adventitious.
Areoles: 2-2.5 cm apart along ribs, with white wool and spines.
Spines: 1 to 5, short, hard, conical, 1 to 3 mm long, dark and persistent (needle-like on immature stems); radial and central spines not distinguishable.
Flowers: 25 to 30 cm long, very fragrant, white or pale cream; the tube and throat 13 cm long, swollen above, 5 cm in diameter. Outer perianth-segments long, slender linear, 12 cm long, brown or purplish (rarely yellow). Inner perianth-segments white, oblanceolate to spatulate-oblong, 3 to 4 cm broad above, acuminate. Pericarpels and floral tubes with numerous scales and white hairs. Filaments numerous, greenish to cream-coloured, the upper row reaching forward upturned near the tip 6 cm long; lower stamens elongated unequal 8 to 12 cm long, weak, reclining on the lower side of the flower-tube and attached along the inner face of he tube for 7 to 8 cm. Tube-proper about 2 cm long, yellow within. Style 20 cm long, yellowish green, bronzed above, thick but weak; stigma-lobes numerous, linear. Areoles of ovary and flower tube bearing numerous scales and long, white, hairlike bristles, 10 to 12 mm long.
Blooming season: Flowering year-round (in temperate climates fragrant flowers first appear in June and complete blooming by the end of the month). The flower starts opening around 10 P.M., is fully opened about mid-night and gradually withers about dawn.
Fruit: Globular, red, 6 to 7 cm. in diameter, hidden by short (to 1 cm), yellowish, bristle-like spines and long, white hairlike spines.
Chromosome number: 2n = 22. 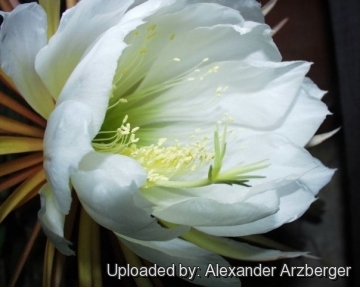 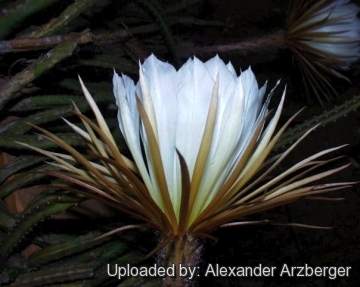 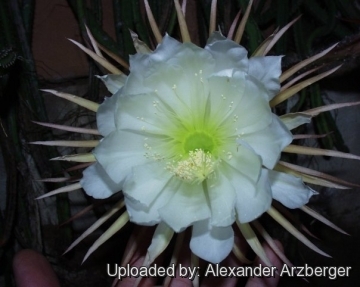 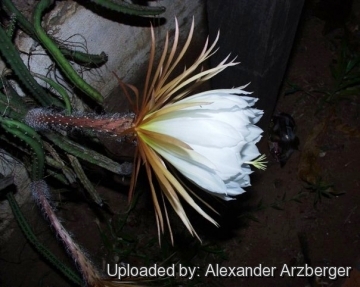 Cultivation and Propagation: Selenicereus pteranthus is grown as an ornamental because of its beautiful nocturnal flowers. It is an easy, fast growing epiphyte plant. It is most frequently cultivated as a house plant (in pots and hanging baskets). It rarely planted outdoors in tropical countries, where climbs trees in a semi-naturalized state. In nature it climbs into trees. Older plants in the greenhouse buds freely. It can be trained to climb a trellis, but looks best in a hanging basket from whence the snake-like stems will dangle 1-2 m over the edge. Watching it is a nocturnal delight.
Soil: It needs a compost containing plenty of humus and sufficient moisture in summer (though quite adaptable) it can be also cultivated on split bark like Monstera or in orchid substrate.
Moisture: The plant is quite resistant to drought condition, but shouldn't dry out totally otherwise it will turn purplish brown and look unpleasant and should be permitted to dry out entirely between waterings. The adventitious roots - those wiry white things - are a good indicator of whether or not it's satisfied with the amount of water it's getting. They absorb ambient moisture and if the soil is too dry, they will reach out to grab as much moisture from the air as they need. So don't prune them off because you consider them unsightly.
Fertilization: Too much fertilizer will cause a lot of lush growth at the expense of flowers.
Hardiness: Should not be kept under 5º C in winter.
Exposition: It perform best if grown in semi–shade but tolerate full sun. Extra light in the early spring will stimulate budding.
Propagation: By cuttings rootted in moss as an epiphyte.