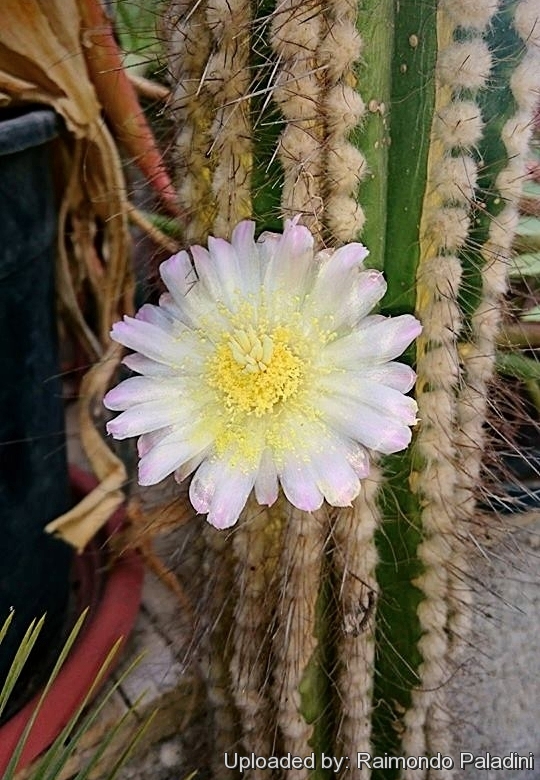 Eulychnia saint-pieana Photo by: Raimondo Paladini
This is the most beautiful species of the genus , producing lots of short white wool as a bed for those long spines. It's definitely a must for any columnar collector!

Origin and Habitat: It is confined to the coastal Atacama desert of northern Chile
Habitat: The Copao (Eulychnia breviflora) grows along the coastal fog zone at an altitude from sea level to 300 m, where it forms extensive forests. It grows in areas where very little else grows. It's a very drought tolerant species. Despite the lack of rain where it lives, the extreme aridity is attenuated by the frequent, often dense, coastal fogs. The fog tends to concentrate in the form of a cloud band. It shows a recurrent pattern; usually it is overcast in the early mornings, the clouds dissipating during the late morning and returning during the late afternoons. Cacti near the coast are often covered with lichens.

Description: The popular Eulychnia saint-pieana is a morphological form of Eulychnia breviflora, very priced for its especially hairy areoles, but both plants with scarcely woolly areoles and plants with very woolly areole (with all intermediate forms) are found throughout the distribution range of the species and it is difficult to classify Eulychnia saint-pieana as a separate variety. It is one of the showiest Eulychnia species sought-after by cacti impassioned.
Habit: It is a candelabriform or arborescent columnar succulent, much branched from below, often with a well developed woody trunk. It has many ribs which are set with large, white, woolly tufts accented by long central spines.
Stems: Nearly erect, 3-7 m tall, 8-11 cm in diameter, greyish-green to dark green.
Ribs: 10-17 straight, somewhat tuberculate, sometime furrowed between areoles.
Areoles: Close set, whit heavy wool and hairs.
Spines: 10-30, often poorly differentiated as central and radials, brown turning dull grey to chalky-white as they ages.
Central spines: 1-2 stout, erect 5-20 cm long.
Radial spines: 0,5-2 cm long, diverging.
Flowers: Bell shaped, white to pale rose up to 2 cm long, segment mostly white with a darker midstripe. They develop from very woolly buds filled with dense brown to white wool and bristles near the top of the plant. Areoles of floral tube and pericarpel without stiff bristles. Tube densely scaly, and shorter than the pericarpel.
Blooming season: Summer, the flowers stay open day and night.
Fruits: Globose to pear shaped, up to 5-8 in diameter, fleshy, acid, especially hairy when young. The fruit is edible, but not very tasty. 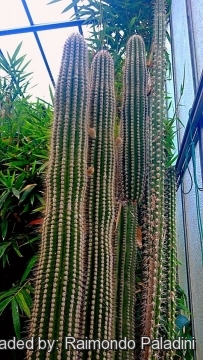 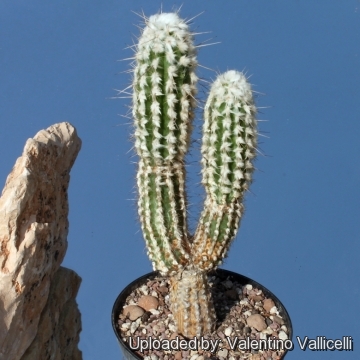 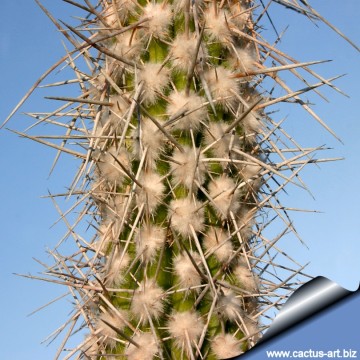 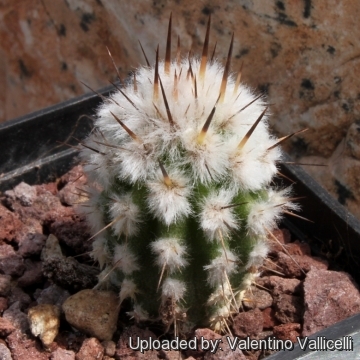 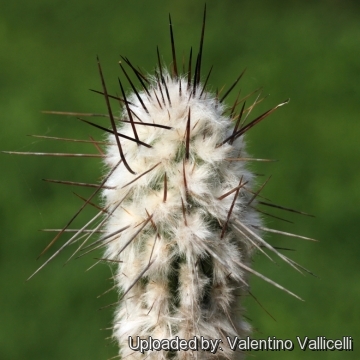 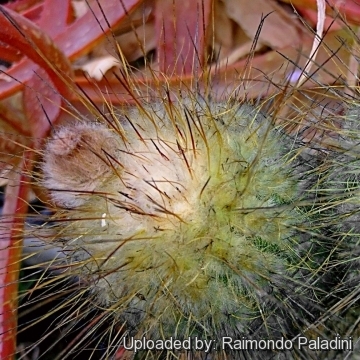 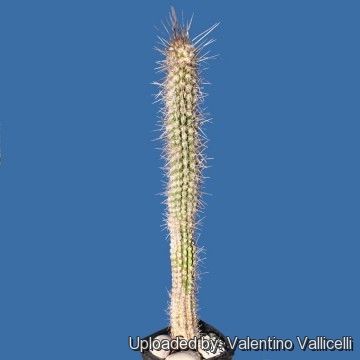 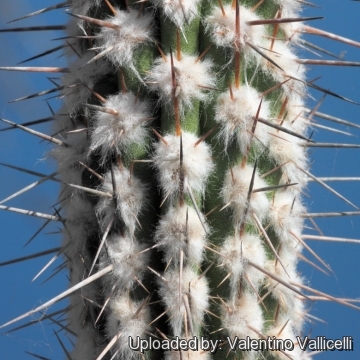 Cultivation and Propagation: This species presents no problems in cultivation and will do well in a sunny spot in a cactus house. These plants will tolerate sun and heat, but not extended periods of frost. The crested form is more frost sensitive and should not be kept at less than -0°C . Grow them in rich, porous, sandy soil, and let their soil dry out between waterings. If potted, repot in the spring, if their roots become cramped. Generally, they should be repotted every other year in order to provide fresh soil. However, this doesn't necessarily mean they'll need larger containers. Fill about a quarter of the pot with broken crocks, gravel, etc. to promote good drainage. After repotting, do not water for a week or more. The crested plants enjoy a warm sunny environment and for more speedy growth a light position on a higher shelf with light feeding and rainwater given to the bottom of the plant will ensure success, especially with rooted detached branches, which do well in these conditions.
Propagation: This plant is easily grown on its own roots. It can be increased by cuttings, which will take root in a minimum temperature of 20° C. Cuttings of healthy shoots can be taken in the spring and summer, cut the stem with a sharp, sterile knife, leave the cutting in a warm, dry place for a week or weeks (depending on how thick the cutting is) until a callus forms over the wound. Once the callus forms, the cutting may be inserted in a container filled with firmed cactus potting mix topped with a surface layer of coarse grit. They should be placed in the coarse grit only; this prevents the cut end from becoming too wet and allows the roots to penetrate the rich compost underneath. The cuttings should root in 2 to 6 weeks.
Uses: The fruit is edible, but not very tasty.