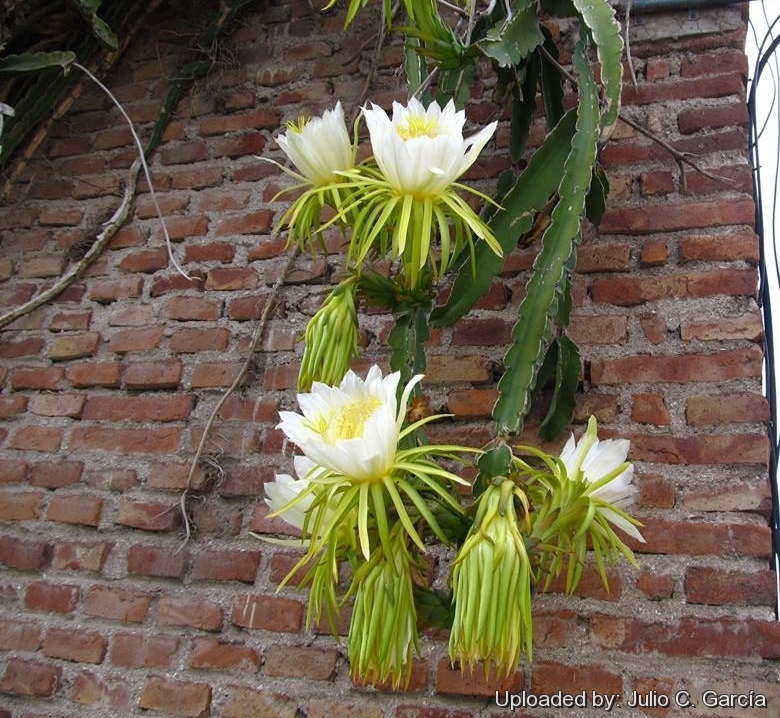 Hylocereus undatus Photo by: Julio C. García
(Night-blooming cereus) The flowers are huge ornate and beautiful and - as indicated by the name - they appear only at night and soon close after the day starts. The plant may grow out of, and over the ground or climb onto trees using aerial roots.

Origin and Habitat: The native range of this species is unknown as it has long been in cultivation, but is likely from West Indies, Caribbean basin, Southern Mexico through Belize, Guatemala, El Salvador and Costa Rica, however, this has not been confirmed. It is the most widely cultivated species in the genus (includes commercial cultivation) and often escapes from cultivation and becomes naturalized around the world in tropical regions. In addition to the wide naturalized range it also has a wide altitudinal range occurring from near sea level up to 2,750 m.
Habitat and Ecology: This species is a lithophyte or hemi-epiphyte tolerant of shade. The naturalized populations are found in tropical deciduous forest, low tropical deciduous forest, riparian vegetation, thorn scrub, and thorn forest.

Description: Hylocereus undatus is a sprawling or vining, terrestrial or epiphytic cactus. They climb by use of aerial roots and can reach a height 10 meters or more growing on rocks and trees. They are very variable and closely related to Selenicereus.
Stems: Green 3-winged, from a few cm up to 5 m long (in mature plants), 4 to 7.5 cm margins undulate and horny wide with wings that are 2,5 to 5 cm wide.
Areoles: about 4.5 cm apart.
Spines: 1 to 3(- 5) conical spines up to 1 cm long (but usually about 2-3 mm long).
Flowers: Flowers are ornate, fragrant and beautiful 25-35 cm long by 30 cm across , white with green outer tepals and bracts.
Blooming season: It bloom only at night, and usually the flower last just one night, in tropical climate the plants can have up to 4-6 flowering/fruiting cycles per year. In temperate climate they bloom In late spring to early summer
Fruits: If pollinated the Hylocereus produce edible red fruits with white pulpa up to 12 cm long. 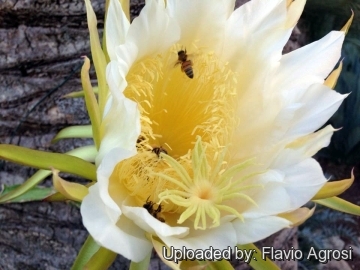 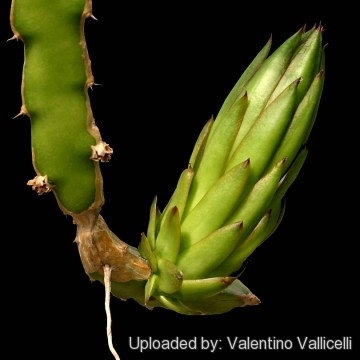 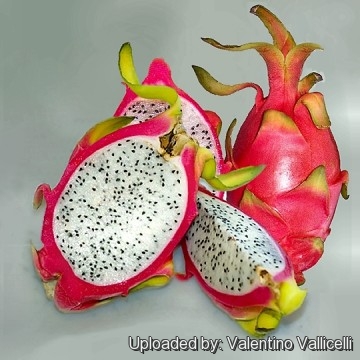 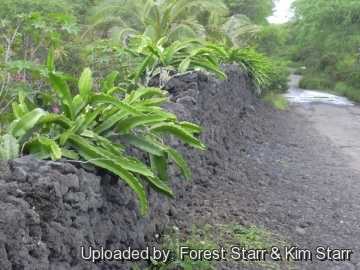 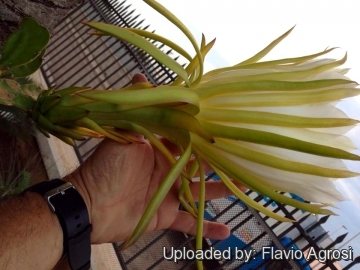 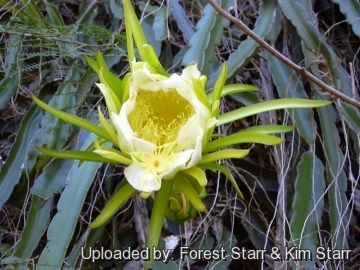 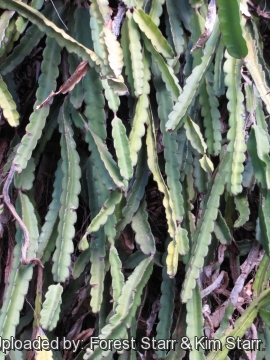 Cultivation and Propagation: It grows best in dry, tropical or subtropical climates, it need full sun to partial shade. Shade is sometimes provided in hot climates. The plants aren't usually too picky as to soil type, but because of their epiphytic nature, it is recommended to grow them in well-drained soil mix that is supplemented with high amounts of organic material. During the growing season (March-August), the plants are watered on a regular basis, making sure that they never dry out completely. They are fertilized on a monthly basis with a balanced fertilizer during this period. In late August, water is restricted to about once a week until January. Night temperatures at this time should be about 10° C. In January or February, watering is stopped for a period of 4 weeks to aid in flower formation. In March, regular watering is resumed and the plant will flower in 6 to 8 weeks. Will tolerate temperatures to 45° C, and short periods of frost, but prolonged cold will damage or kill the plant.
Propagation: Hylocereus undatus is propagated by stem cutting or (rarely) by seed in the spring. Seed should be sown in well-drained compost and should germinate in 14 to 28 days at 18 to 21° C.
Uses: It is used both as an ornamental vine and as a fruit crop.
Edible Plant Parts and Uses: The fruit (Pitaya or Dragonfruit) are round beautiful with an intense colour and shape, of 1 kg or more and a delicious light melon-like taste, often they red coloured fruit with prominent scales. The thin rind encloses the large mass of sweetly flavoured translucent white or red pulp and small black seeds. Some varieties are pinkish or yellow. To eat the fruit serve chilled and cut in half. Scoop out the flesh and seeds much like a kiwi fruit. It is also used to flavour drinks and pastries. Unopened flower buds are cooked and eaten as vegetables.
The white mucilaginous flowers turn yellow when dried. They are edible and sour in taste. Sold in packages in Chinese grocery stores, the flowers should be soaked before cooking in soup. The fresh blossoms can also be used in vegetable soups.