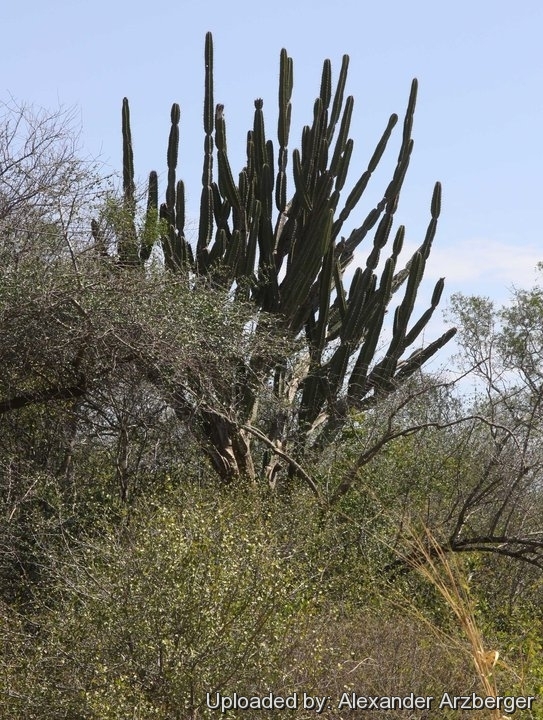 Origin and Habitat: Cereus stenogonus occurs in Argentina, in the provinces of Chaco, Corrientes, Formosa and Misiones, as well as in Paraguay ( Alto Paraguay, Caaguazú, Central, Concepción, Cordillera, Guairá, Paraguarí and Presidente Hayes departments) and Uruguay.
Altitude range: This species can be found at elevations between 10 and 500 metres above sea level.
Habitat and Ecology: This cactus grows in sandy and clayey soils, in forest edges and as part of the scrub within low, subhumid forests together with Stetsonia coryne and Quiabentia pflanzii. It also occurs in rocky areas. Harrisia bonplandii, Harrisia martinii, Opuntia sulphurea, and Opuntia glomerata are also present in the understory. All of these cacti tolerate prolonged periods of heavy rain and saturated soil. Cereus stenogonus is common and abundant throughout its range and there are no known threats to this species. 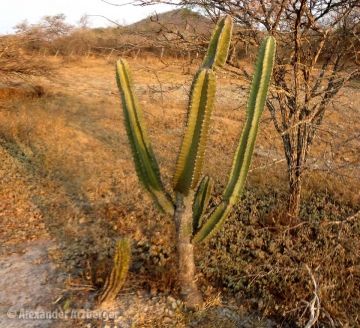 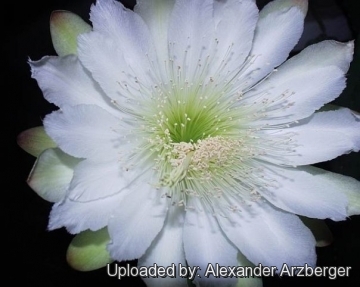 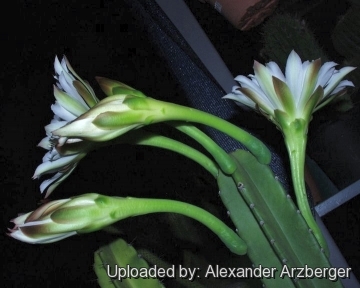 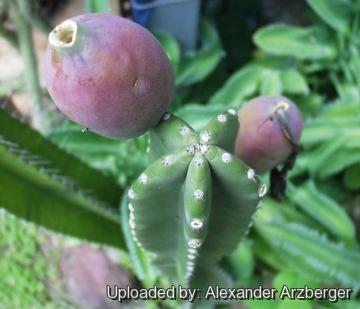 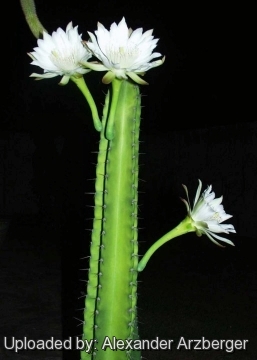 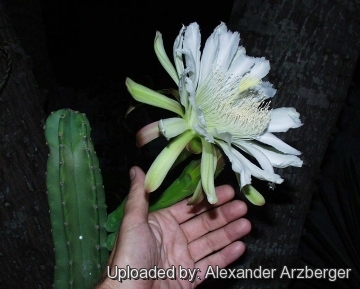 Cultivation and Propagation: Cereus stenogonus is very easy to cultivate, easy to propagate, tolerates light frost, and produces numerous showy white flowers 22 cm long.
Growth rate: It grows quickly (a young plant will easily grow more than a 30 cm per year) and a plant grown in loose fertile soil with ample water availability may get up to 8 metres tall with dozens of branches.
Soils: For pot culture it needs standard cactus soil. Outdoors needs well drained spots, with deep soil, but will still thrive in less than ideal conditions. The species is sensitive to salinity.
Repotting: Since they are big-sized plants, they need plenty of space for their roots. Repotting should be done every other year, or when the plant has outgrown its pot. Use pot with good drainage.
Watering: Water regularly in summer, but do not overwater and allow to dry fully before watering again. Its roots are easily lost in pots that stay damp for any length of time. It should not be watered at all in winter. In the rest period no high atmospheric humidity!! Care must be taken with watering as they tends to become swollen and untidy in growth habit if given too much water and shade.
Fertilization: During the growing season enrich the soil using a fertilizer rich in potassium and phosphorous, but poor in nitrogen, because this chemical element doesn’t help the development of succulent plants, making them too soft and full of water.
Hardiness: Reputedly sensitive to frost, but less so if kept on the dry side prior to, and during, cold weather (hardy to -5° C for short periods). However some warmth throughout the year will increase the grower's success (minimum 5° to 8°C during rest season). In presence of high atmospheric humidity make sure that your Cereus hexagonus are not exposed to freezing temperatures, or they may die. Outdoors this plant is very adaptable, as long as you avoid excessive humidity in the winter months.
Exposition: Light shade when young, full sun later. Outside it likes strong sunshine, but is tolerant and do well with light shade during the hot Summer months, inside it needs bright light, and some direct sun.
Propagation: From cuttings in spring (let them dry till the ends callous well). Then replant them in fresh cactus soil that is ever so slightly moist, and keep them that way till they root), or by Seeds (Seeds should be sown in a well-drained soil mix. Surface sowing is the best; seeds germinate in 14-28 days at 25° C . The seedlings should not be disturbed until they are well rooted, after which they can be planted separately in small pots.