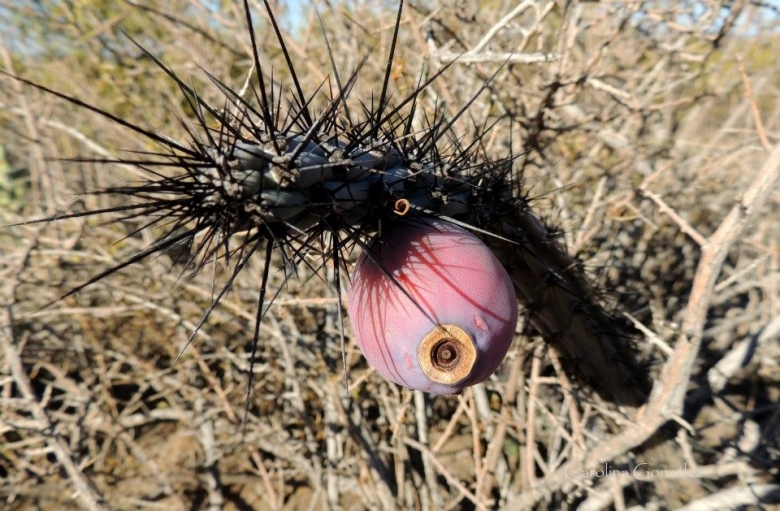 Origin and Habitat: Cereus aethiops occurs in northern Argentina (Buenos Aires, Catamarca, Córdoba, Entre Rios, La Pampa, La Rioja, Mendoza, Río Negro, Salta, San Juan, San Luis and Tucumán provinces).
Altitude range: This species is found at elevations between 0 and 800 metres above sea level.
Habitat and Ecology: Cereus aethiops grows in a variety of habitats, in dry forest, shrublands, chaco, espinal, and pampa grasslands, together with Denmoza rhodacantha, Echinopsis leucantha, Opuntia sulphurea, Maihueniopsis glomerata, Eriosyce strausiana and Trichocereus candicans. The species can regenerate from subterranean structures if the above ground part is cut. C. aethiops has a wide range, and even though the populations are not abundant, they are stable and there are no major threats. However, in the Chaco, in the north-eastern part of its range, land use change for soybean plantations affects the populations. It is occasionally used as an ornamental.

Description: Cereus aethiops is a shrubby, erect, more or less columnar cactus, sometimes prostrate, usually much branched from the base, to 2 m high, 1.5 m wide, with blue waxy coating on young stems and peculiar black spines. It is one of the few true Cereus which will flower when small (on 50 cm tall plants ), the night-blooming flowers are fragrant, white to pale pink, to 20 cm long.
Derivation of specific name: The epithet comes from the Greek and means "burn, black" and refers to the black spines.
Stems: Dark bluish green to purplish, 1 to 2 meters high, 2-4(-7.5) cm in diameter branching rarely above; joints 3 dm long or more, somewhat tapering toward the apex; ribs 5 or 8, low, somewhat tuberculate, obtuse or rounded, separated by acute intervals.
Areoles: Large, often nearly black up to 1.5 cm apart.
Central spines: 1 to 4, a little stouter than the radials, ascending, black, to 20 mm long.
Radial spines: 7-12, grey with dark tips or black, at least at bases and tips, to 10 mm long.
Flowers: Long, funnel-shaped, slightly scaly, up to 22 cm. long, with a limb 12 cm in diameter; outer perianth-segments linear-lanceolate, purple or rose-colored, bluish green in the outside; inner perianth-segments white; filaments and style included, the former attached all along the inner surface of the long tube.
Fruit: Prune-shaped, more or less brownish-red to purplish when mature, truncate at apex, with a thick rind, smooth, somewhat glaucous, 4-6 cm long.
Seeds: Black. 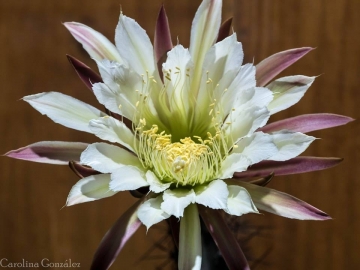 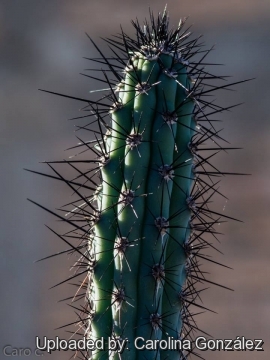 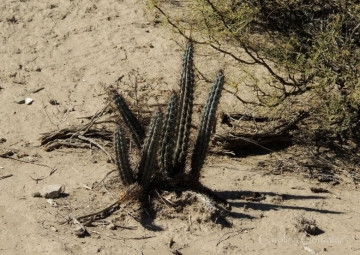 Cultivation and Propagation: Cereus aethiops is a slow growing cactus kept for the beauty of its form and flowers. It is a summer grower species. Easy to cultivate but somewhat rot prone if kept in a non ventilated place, especially after planting.
Growth rate: Slow-growing and very long-lived. T
Soils: It likes very porous mineral cactus mix soil, but can become too elongated if compost is too rich.
Repotting: This plant needs plenty of space for its roots, repotting should be done every other year or when the it has outgrown its pot. Use pot with good drainage.
Watering: Needs moderate in summer, but do not overwater (extremely rot prone), keep dry in winter at a minimum temperature of 0°C.
Fertilization: Feed with a high potassium fertilizer in summer.
Hardiness: Reputedly resistant to frost if kept on the dry side prior to, and during, cold weather (hardy to -12 C ° C, or less for short periods), but for safe cultivation it is best to avoid freezing temperatures. It need a very good ventilation.
Exposition: The plant tolerates extremely bright situations. Blasting full sun encourages flowering and heavy spine production.
Pests & diseases: It may be attractive to a variety of insects, but plants in good condition should be nearly pest-free, particularly if they are grown in a mineral potting-mix, with good exposure and ventilation. Nonetheless, there are several pests to watch for:
- Red spiders: Red spiders may be effectively rubbed up by watering the plants from above.
- Mealy bugs: Mealy bugs occasionally develop aerial into the new growth among the wool with disfiguring results, but the worst types develop underground on the roots and are invisible except by their effects.
- Scales: Scales are rarely a problem.
- Rot: This species is not easy and accommodating, often suffer of cryptogamic diseases. The main problem with Argentinian pyrrhocacti is the scorching type disease on the apex. This disease seems to be worse on Eriosyce strausiana than the others species, it scorches just some plants, but it doesn't seem to be contagious. Takes a while but they can grow out of it. Root rot is a serious problem with pyrrhocacti if the plants are not watered and “aired” correctly. If they are not, fungicides won't help all that much.
Propagation: Seed or cuttings.